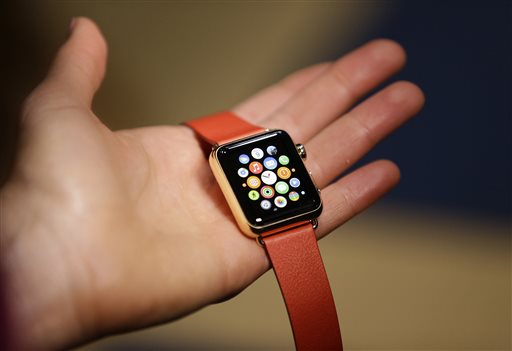 It looks so innocent and playful. Make calls, read email, control music, manage Instagram photos, keep up with your workout, pay for groceries, open your hotel room door. CEO Tim Cook says you can do it all from your wrist with Apple Watch  for 18 hours a day. That's how long the battery will last, on average.

It will be a cold day in Hades before you catch me strapping on an Apple Watch. The reason is simple: I think the Apple Watch is probably a gadget from Satan. I would no more take an Apple Watch than I would an apple from a naked lady called Eve.

The logical, if paranoid realization of the Apple Watch’s ultimate potential is a science fiction nightmare and digital utopian’s dream come true.

It is easy to imagine that the Apple Watch 5.0 will provide perfect real-time information about your exact location, pulse, blood pressure, pulmonary function, brain activity, media consumption and output, hormone levels and happiness status to a central uber-brain somewhere in the Cloud, maybe near Cupertino.

In the hands of Ming the Merciless, Darth Vader or Vladimir Putin, this might be a bad thing, a perfect Big Brother dystopia.

But in the hands of the benevolent capitalist idealists who serve our planet so nobly with companies such as Google, Facebook, Microsoft and Apple, the Apple Watch is a logical next step toward digital nirvana.

We have a lot of trust in the tech idealists. We’re hooked on their stuff. We buy into the idea that we are marching to a more open and rational world. My Big Data is your Big Data; compute me to my contentment.

With a better Apple Watch, for example, you could be warned that you are at risk of a heart attack in time to get help. If your serotonin levels are dropping, you get an alert to pop a Prozac or two. If news reports about a mass shooting are getting you down, those kind of stories can be automatically blocked from your newsfeed and replaced with more uplifting content.

I may be temperamentally suspicious of the over promises of progress. But I am not ordinarily prone to Orwellian meltdowns. If I am over-reacting to the (potentially Satanic) launch of the Apple Watch, it is partly because I recently read “The Circle,” an uncanny novel by David Eggers.

“The Circle” is set only a few release cycles into the future. The Circle is a happy and virtuous Google-Facebook-Twitter-Apple-Comcast that basically provides all of the mediated information and communication there is. It believes that information wants to be free, that all things can be measured and that all problems are solvable. In other words, it simply reflects the current beliefs of the Church of Silicon Valley.

But in its quest for Utopia, we see that the Circle is threatening privacy, individuality, creativity, solitude, rebellion and most of what we feel can’t be reduced to the computation and binary code. The Circle may or may not be wittingly evil. But it is ultimately dehumanizing.

Here’s a little, unemotional example of how this is already happening. I used to be a whiz at navigation and remembering routes and locations. I’m useless now. Why? Because I grew dependent of GPS and my brain-mapping skills atrophied.

A few generations back, Native Americans navigated the vast West purely by reading nature. Cowboys and ranchers couldn’t do that, not because they were newcomers but because they had grown dependent on maps.

Does this make Kit Carson and me less human in any important way? Maybe not. But I don’t want to have to use my Apple Watch to find the bathroom at work either.

But I am far crankier about the everyday, high-tech assaults on my cognitive bandwidth, specifically media and information technology.

The human attention span has become the world’s most valuable real estate. Wily marketers, peddlers, entertainers and profiteers are trying to insert themselves into our attention span _ and thus our consumer behavior _ in ever smaller but more ubiquitous spots. Our surfing, reading, shopping, working and, worst, our social lives _ everything we do with these addictive devices _ are infiltrated.

I’ll be damned if I let them start putting ads and distractions on my watch.

The debate between the digital idealists and the skeptics is one of the most interesting ongoing arguments around. The skeptics are not Luddites. They are rightly worried because the current technological revolution can truly rewire our brains.

Despite my growling, I am actually agnostic about the promise and perils of technology in the future. But I’m sticking with my old mechanical watch.

Readers may send him email at dick.meyer@scripps.com