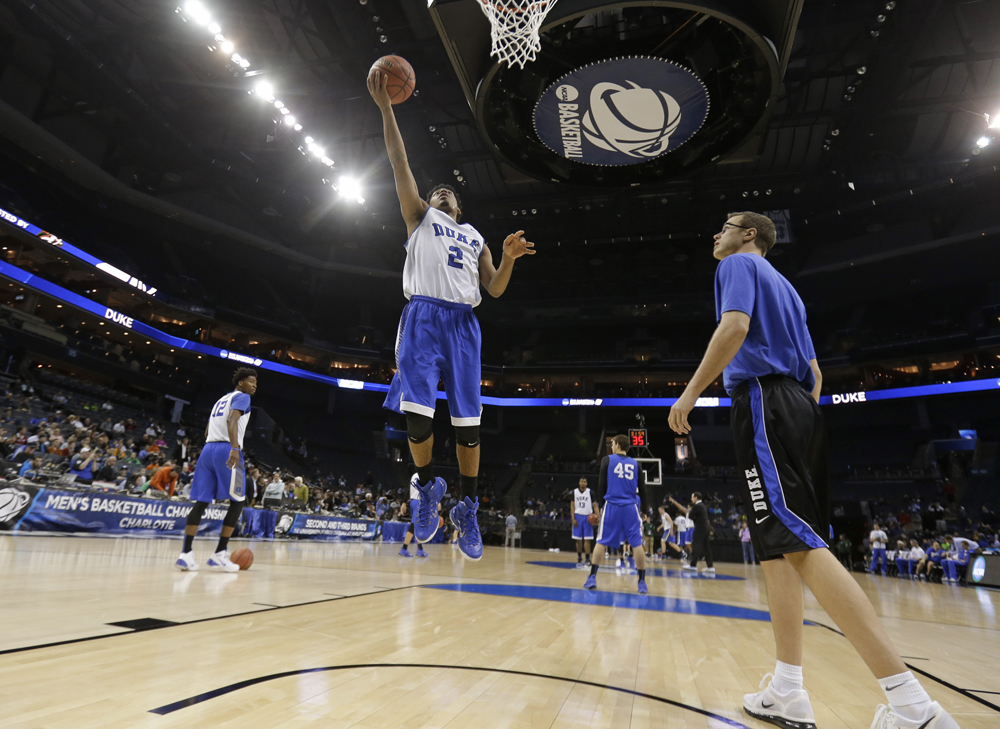 The Associated Press Duke's Quinn Cook (2) drives to the basket during practice Thursday for an NCAA Tournament game in Charlotte. Duke plays Robert Morris on Friday.

CHARLOTTE, N.C. (AP) — Quinn Cook has twice felt the sting of a shocking early NCAA Tournament loss along with the rush of making one deep push in March. Now Duke’s senior leader is down to his final chance to help the Blue Devils reach a Final Four.

That pursuit starts Friday, when the top-seeded Blue Devils (29-4) open play in the South Region with a home-state game against 16th-seeded Robert Morris (20-14).

Playing on a team led largely by freshman star big man Jahlil Okafor, Cook has been the emotional leader of a team with his stepped-up offensive play — his 15.7-point average is four points better than either of his previous two seasons — and his on-ball defense.

He’s also one of only three Duke players to have played in an NCAA win, an odd stat brought on by the team having four freshmen among its eight scholarship players.

Cook’s freshman year ended with an opening-game loss to No. 15 seed Lehigh while last year’s marked another one-and-done showing, this one to No. 14 seed Mercer. In between was a run to a regional final before falling to eventual champion Louisville.

For Robert Morris coach Andrew Toole, Cook’s leadership has been critical to helping Duke earn its No. 1 seed.

“I think as a coach, you watch a guy like that who in his senior year has to shift a little bit of what his role is, has to learn to co-exist with some talented freshmen — and actually ends up probably having his best season because of it,” Toole said. “That’s got to be a credit to the way he approaches every day and his desire to win.”

IN THE FLOW: Robert Morris should be in tournament mode, at least. The Northeast Conference champion Colonials rallied from 13 down in the second half to beat North Florida 81-77 in the First Four on Wednesday night, earning the program’s first NCAA win since 1983 and their second overall. “We’re going to try to use the experience of already playing in one and getting all the jitters out of the way and stuff like that,” junior Rodney Pryor said, “so I think that’s good for us.”

DUKE’S HEALTH: The Blue Devils don’t enter this one at 100 percent even with a week off since an Atlantic Coast Conference Tournament semifinal loss to Notre Dame. Coach Mike Krzyzewski said freshman reserve guard Grayson Allen has been sick all week, while Okafor continues to play through an ankle injury suffered last month against rival North Carolina.

DEFENDING OKAFOR: How will Robert Morris defend Okafor inside? Colonials starting center Elijah Minnie gives away three inches and about 55 pounds to Okafor, who has also had plenty of practice passing out to shooters against double teams all season.

SCORING BALANCE: The Colonials have offensive balance with Pryor (15.4 points), Marcquise Reed (14.9) and Lucky Jones (14.5). Pryor and Reed are both shooting at least 41 percent from 3-point range, too. They’re facing a Duke team that has had some defensive struggles this year, most notably against dribble penetration.

MIRACLE? Every year, the stat is repeated: no No. 16 has ever beaten a No. 1 in the NCAAs. That could mean the Colonials come out loose and relaxed with a nothing-to-lose approach. Or they could feel awed by the moment. Even Toole doesn’t quite know how they’ll respond. “Hopefully with (the first game) being done already, we’ll be able to kind of settle in as soon as the game starts,” Toole said. “Obviously the opponent is a little bit different and the stage is a little bit different.”