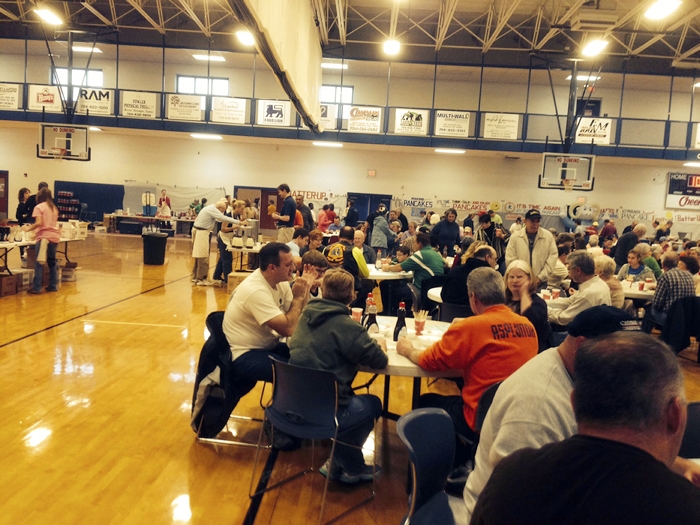 Submitted photo The Hurley Family YMCA gymnasium was full of diners last year during the annual Kiwanis Pancake Festival. The 2015 edition of the pancake festival will be held Friday and Saturday at the Y.

Once again, the Pancake Festival will be held Friday and Saturday at the J.F. Hurley Family YMCA, 828 Jake Alexander Blvd. Donations are $7 for adults and $5 for students. Children under 5 eat free.

Kiwanians are selling tickets, which also will be available at the Y on the days of the festival. Coupons on the back of the tickets include $2 off a full-service oil change at Auto Express and a free tire rotation with oil and filter service at Salisbury Motor Co.

“The Pancake Festival is a community event, not just a fundraiser, and is really our gift to the community,” Kiwanis President Jerry Lawson said. ” There is something about eating at community tables that sparks conversation and a break from the hectic pace of our daily lives.

“The smell of pancakes and sausage does not hurt.”

Kiwanis as an organization was founded in Detroit 100 years ago, and the Salisbury Kiwanis Club will be celebrating its 95th anniversary Nov. 20 this year. The pancake festival has been the club’s biggest fundraiser for its charitable endeavors since 1957.

The club held a Brunswick stew fundraiser prior to that.

Other things Kiwanis supports include the following;

• A partnership with the Friends of the Library and the Altrusa Club for a reading project at Patterson Farms.

• Cooking for the Special Olympics athletes.

“We also support the  Kiwanis International ELIMINATE project,  in conjunction with UNICEF,  that is eliminating maternal/neonatal tetanus in those countries that have not yet done so,” Lawson said.

He added that Kiwanis is a global organization of volunteers dedicated to improving the world one child and one community at a time — its defining statement.

Kiwanis once ran health camps in Rowan County, but it just sold the last camp on Bringle Ferry Road to Myra Tannehill, who will be starting a Montessori school on the site.

The Kiwanis Club is open to men and women. The club meets at noon each Friday at the Salisbury Country Club, and guests are welcome.

A couple of clowns: Husband-wife team is double the…