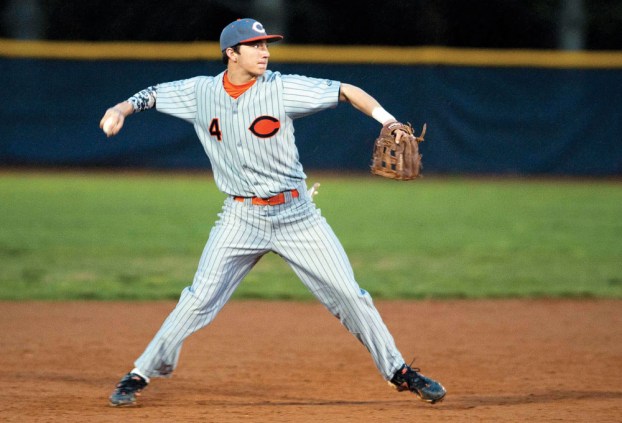 MOUNT ULLA —  Kris Peacock explained that his only thought process was to put the ball in play.

Instead the Carson senior put the ball out of play — a three-run homer that soared over the Blue Monster at West Rowan’s diamond. It was a massive blow that keyed Carson’s very wet, very exciting 8-7 SPC victory over the Falcons on Friday.

“It was a really good win because our guys fought down to the last out,” Carson coach Chris Cauble said.

Carson led 4-0 early, but the Cougars trailed 7-4 after the Falcons smashed five doubles in a seven-run fifth. Peacock’s homer in the sixth lifted the Cougars off the deck to a 7-all tie. Carson (4-1, 2-1 SPC) won it when Michael Morrison doubled leading off the seventh and scored sliding on Heath Mitchem’s line-drive single  to center that nearly took the cap off the head of West Rowan reliever Harrison Baucom.

“It’s a hard loss to stomach,” West Rowan coach Seth Graham said. “Because we had it.”

The Cougars not only led 4-0 after two innings, they had a chance to tack on more runs in the third. But they ran themselves out of that inning. Then momentum turned.

“We were aggressive on the bases, and I can live with us making aggressive mistakes,” Cauble said. “Against Bautista, we figured we were going to have to scratch for every run, but we swung the bats very well.”

Mitchem started on the bump for the Cougars and didn’t allow a hit for three innings. But in the fourth, the Falcons feasted. Juan Garcia, Lee Poteat and Austin Love bopped back-to-back doubles to start a seven-run inning. Cauble wanted Mitchem to fight through the inning, but the two-baggers kept coming. Baucom’s two-run double tied the game 4-all. Jeremy Simpson’s rocket to left-center put the Falcons up 6-4. Kacey Otto’s single made it 7-4.

“We’ve got a dynamic lineup, 1 through 9, and we can put together innings like that,” Graham said.

The Falcons batted around, and Cauble finally replaced Mitchem with Peacock. Mitchem said he didn’t mix his pitches.

“I threw too many fastballs and that’s what they were looking for,” he said.

When Bautista sit the Cougars down quietly in the fifth, the Falcons (4-2, 1-2) appeared to be in control. After Bryan Ketchie replaced Bautista, who had thrown 75 pitches, for the sixth, the Falcons failed to catch a playable foul popup by Peacock, and then Peacock hit one out of sight to suddenly tie the game at 7-all.

Baucom doubled to lead off the West Rowan sixth and moved to third base on a passed ball, but Carson’s freshman reliever Owen White made sure he stayed there. White struck out Simpson and Otto, and after an intentional pass to Garcia, he fanned the Poteat.

“Coach Cauble said we weren’t going to pitch to Garcia, and that was fine with me,” White said. “We went after the next guy  and got him. I just trusted my pitches and let my defense work.”

The only part of Carson’s defense that had to work much was Carson catcher Ryan Bearden.

Mitchem came through with the game-deciding hit in the seventh to redeem himself for his pitching struggles.

“I just had to keep my mind straight and help us win the game,” Mitchem said.

White walked the leadoff man in the West Rowan seventh, but he retired the next three.

NBA: Hornets win after being down by 19