College basketball: At Wake, it was the season of ‘what if?’ 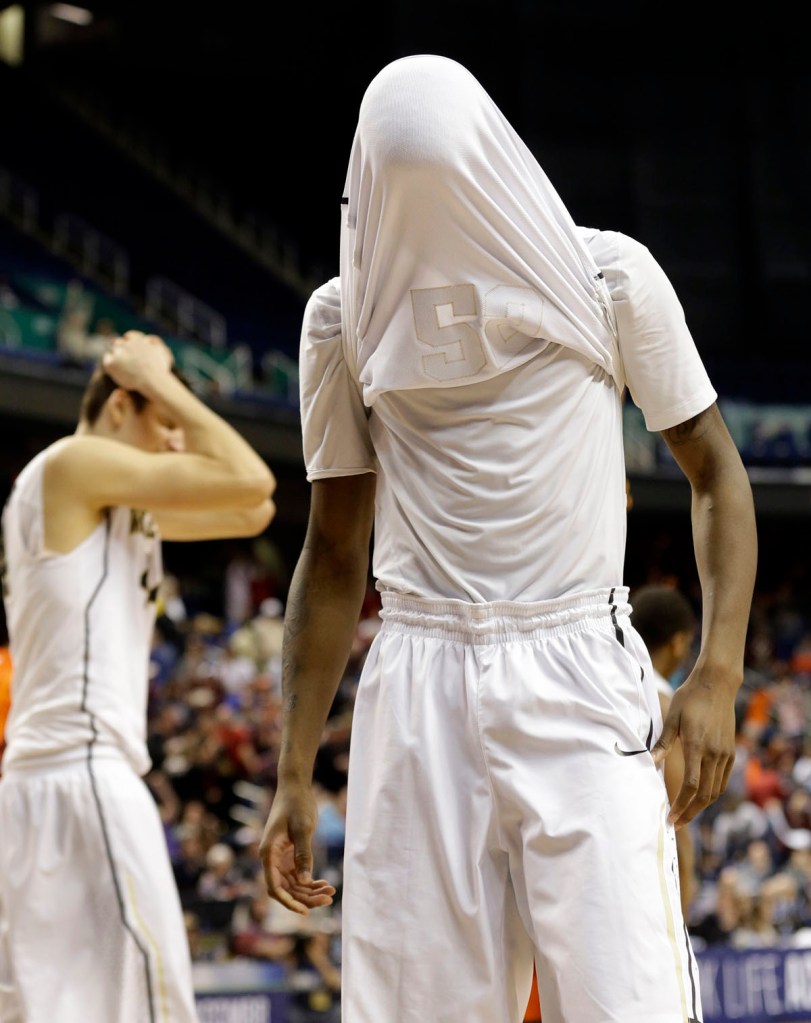 The Associated Press Wake Forest's Cornelius Hudson, front, and Konstantinos Mitoglou, left, leave the court Tuesday after the Demon Deacons' 81-80 loss to Virginia Tech in the first round of the ACC Tournament in Greensboro. Wake Forest, under first-year coach Danny Manning, had 12 games decided by single digits in 2014-15. In that grouping, the Demon Deacons won only five.

Just as easily, it could have been a whole lot worse.

For the Demon Deacons (13-19), their fourth losing season in five years didn’t exactly feel like all those other ones.

Of their 19 games against Atlantic Coast Conference opponents, 12 were decided by single digits. Wake Forest went 5-7 in those games.

That was capped by an 81-80 loss to Virginia Tech in the first round of the league tournament.

Guard Codi Miller-McIntyre calls his junior year “a process” and says “we have to be patient with that” because “it’s going to come.”

For the third time in five years, the Demon Deacons failed to beat a single ACC opponent away from Winston-Salem, either in the regular season or in the tournament.

They had their occasional head-scratchers — chiefly, a 36-point home loss to then-No. 2 Virginia or a 43-point defeat at then-No. 3 Duke that marked the program’s worst loss since the 1940s.

But for the most part, they did come close: five losses were either by three or fewer points or went to OT.

Among them, they took Virginia to the final possession in a one-point loss on the road, lost to Syracuse by three in overtime, were beaten at Clemson by two and lost at Florida State in double OT.

They also tested a pair of top-five-at-the-time teams at home in consecutive games before losing by single digits.

“I wish we were better off than we are right now, but I do feel we’re moving in the right direction, not as fast as I would like or we would like,” Manning said. “But we’re getting there, and I think our foundation is almost down and intact, and we’ll continue to work on that and build on it.”

In an indication of how fine the line between winning and losing is for these Demon Deacons, their most lopsided league win was a seven-point victory over Georgia Tech. The other four came by a combined 12 points.

“Obviously, we’d like to have a better record than we ended with, so that’s something that you like to see a little bit better,” Manning said. “These guys have gone through a lot of change. … We’ve come in and we’ve done things a lot different than what they’re accustomed to, and they’ve handled it very well, and we just have to continue to work.”

Manning, a former No. 1 NBA draft pick who came to Wake Forest 11 months ago after two seasons at Tulsa, wants the sting of the way the season ended to stick with a roster that is scheduled to return virtually every key contributor.

Of the eight players who saw the court in the tournament loss to the Hokies, seven were juniors or younger — including all five starters.