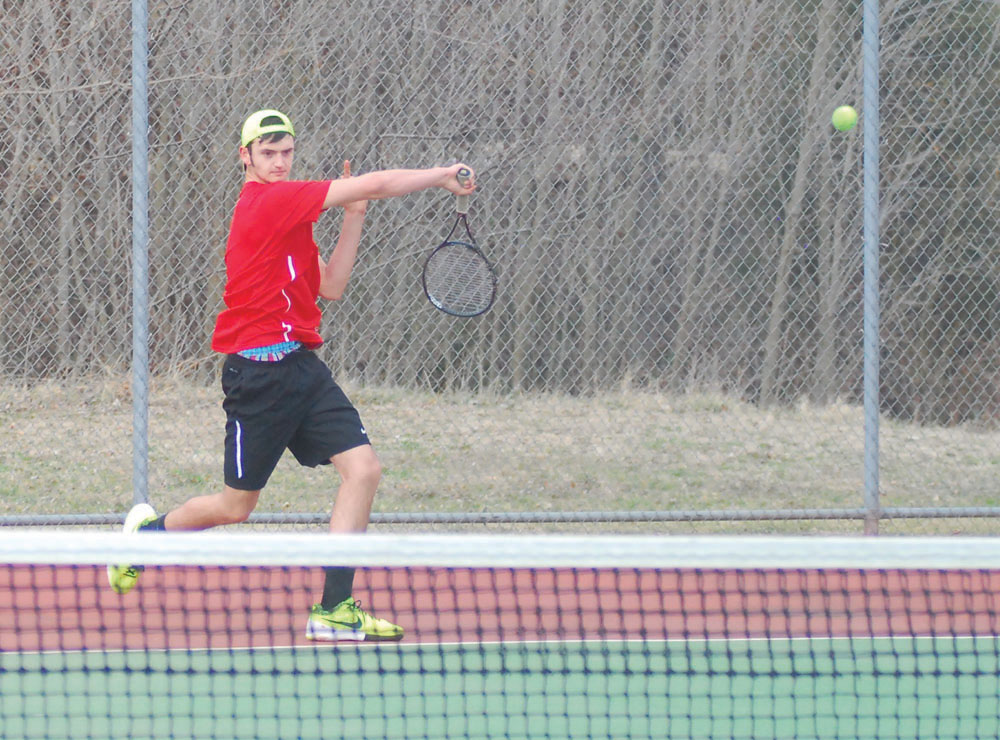 ADAM HOUSTON/THE SALISBURY POST Salisbury's Hunter Carlton returns a shot in his match against Carson's Graham Purcell. Carlton was down in the second set, but he battled back to force a third-set tiebreaker. Purcell eventually won 6-2, 4-6, 16-14.

The coaches for Carson and Salisbury boys tennis said their boys needed more time on the court. After all the snow and rain, they had to focus on conditioning work instead of improving their games. The Cougars and Hornets got plenty of time on the court, and a handful put their conditioning to the test Tuesday at Salisbury.

In a match lasting 3 hours, 39 minutes, the Hornets came away with a 7-2 victory.

The Cougars’ two points came from Marshall Wood and Graham Purcell in a pair of three-set triumphs at the No. 1 and No. 2 singles. Wood defeated Spencer Storey 4-6, 6-1, 10-8 on Court 1, and Purcell came away with a 6-2, 4-6, 16-14 win on Court 2 over Salisbury’s Hunter Carlton. Purcell was up in the second set only to have Carlton battle back to force a tiebreaker.

Wood and Prucell then partnered up for a doubles match against Storey and David Derrick. The two teams battled fiercely with Storey and Derrick earning the 8-6 decision.

The Hornets and Cougars — two of the top boys tennis programs in the county — were using the match not only as a tune-up for conference matches, but it also helped Salisbury coach Milton Griffith and Carson coach Josh Trexler gauge where their teams are early in the season.

“I think it’s a great match for both schools,” Trexler said. “I think it definitely shows the guys where they are based on how we do here or when Salisbury comes to our place. …Being able to get to know our players and talk to them during a match, I think they need to be out there because they need the reps.”

Carson (0-2, 0-1) opened its season Monday with a 6-3 loss to East Rowan in South Piedmont Conference action. The Hornets (3-0, 1-0 CCC) remain undefeated after wins over West Rowan and East Davidson. Going into Tuesday’s match, both teams had only three days worth of practice.

Both are also trying to replace four seniors from their 2014 teams.

“We’re young. We have only two players that had court time last year,” Griffith said. “My main thing is getting us playing time. If we get that, we’ll get better.”

Storey moved up to the top singles spot after playing at No. 3 last season. Mathias De Comarmond cracked the top six and plays at No. 4. Hunter Carlton was the top alternate in 2014 and is playing at No. 2 in 2015.

On Tuesday, the Hornets won the singles matches on courts 3-6. David Derrick, De Comarmond, Matt Sukkassem and Benjamin Roy won their singles matches in straight sets to give the Hornets a 4-2 advantage going into doubles play. Salisbury swept the three doubles matches, losing only 11 games.

The Cougars are looking at Wood, a Catawba signee, to be the leader of the team. Though it’s not just because he plays in the No. 1 slot.

“The guys look up to him because he does have that skill set, but he is really competitive, and he wants everybody to be just as competitive as he is,” Trexler said.

“Graham, his motto has been here the last two days has been consistency,” Trexler said. “Everything has been really consistent.”