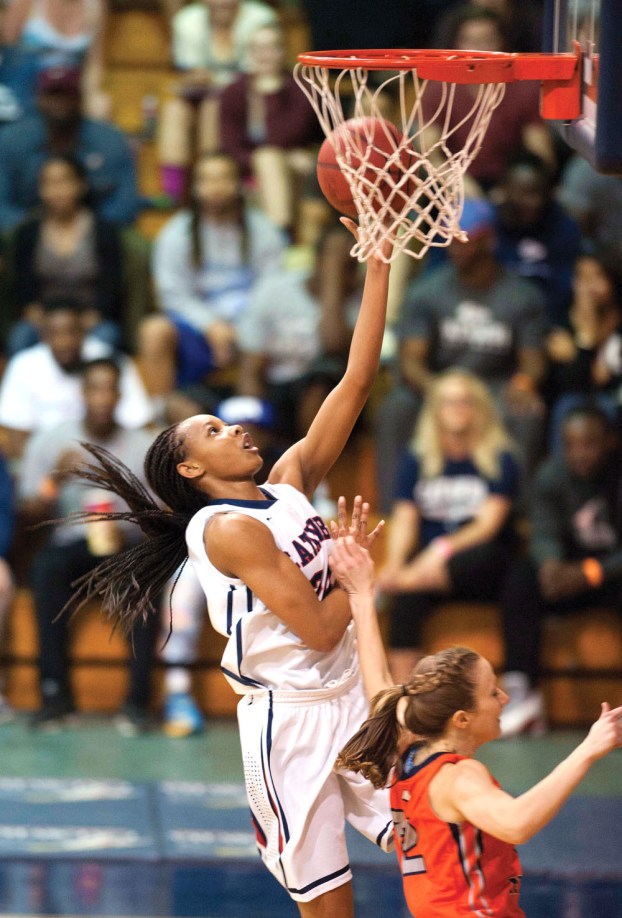 SALISBURY — Jada Huntley scored 31 points and pulled down 14 rebounds in an incredible performance, but even Huntley pointed at senior Chloe Bully as the key to Catawba’s 79-52 rout of Carson-Newman on Wednesday.

“We were all playing for her,” Huntley said. “We’re not ready to let Chloe go yet.”

If the fourth-seeded Indians (18-10) had lost the first-round SAC tournament matchup, their season was over, and they were going to have to let Bully go. Instead they’ll head to Greenville, South Carolina, to face top-seeded Anderson at noon on Saturday in a semifinal, and a lot can happen.

Even if Catawba doesn’t win the tournament, it now has a shot at landing an at-large bid to the Southeast Regional.

Huntley — a 5-foot-9 sophomore who was second team All-SAC — made jumpers, made layups, scooped in loose balls and stuck back rebounds. Fifth-seeded Carson-Newman (19-10) had no answer.

“Jada is just so athletic,” Catawba sophomore Bri Johnson said. “When she stays out of foul trouble, she can score, she can rebound, and she can defend. She can do anything she wants to do.”

“I was pleased with our whole team effort,” Catawba coach Angie Morton said. “We were very focused on this game and now we’ve played excellent defense three games in a row.”

Carson-Newman shot 24 percent in the first half.

The Eagles, who had won at Catawba in the regular season, tried to charge early in the second half and fought within 51-39 with 10 minutes left. That’s when Johnson salvaged a Catawba possession by taking a pass from Bully on the left wing in front of Catawba’s bench and burying a long-distance 3-pointer as the shot clock expired.

“It was a tough shot, but it was a shot I expected to make,” Johnson said. “We work hard on our shooting to be able to make shots like that.”

Johnson’s 3-pointer was a backbreaker. When she drilled another one a minute later from the right side, Catawba led by 20 again, and there was no remaining doubt in the outcome.

“That’s what Bri does — big shots at big moments,” Morton said. “She’s so steady. She’s been glue for us.”

Catawba remembered the 2014 season. It ended with a long ride to Carson-Newman for a first-round tournament loss.

Playing at home and playing in the last game at Goodman Gym before it’s renovated  — and playing for Bully — the Indians weren’t going to let this one get away.

“We owed Carson-Newman,” Huntley said. “We came out with intensity, we had fun, and we played great.”

Bully had nine assists. Zhaquondalee Greer and Johnson scored 13 each for the Indians.

“We want to keep playing,” Johnson said. “We don’t want the journey to stop.”

The Associated Press DURHAM, N.C. (AP) — No. 3 Duke has been carried all season by one of its four... read more