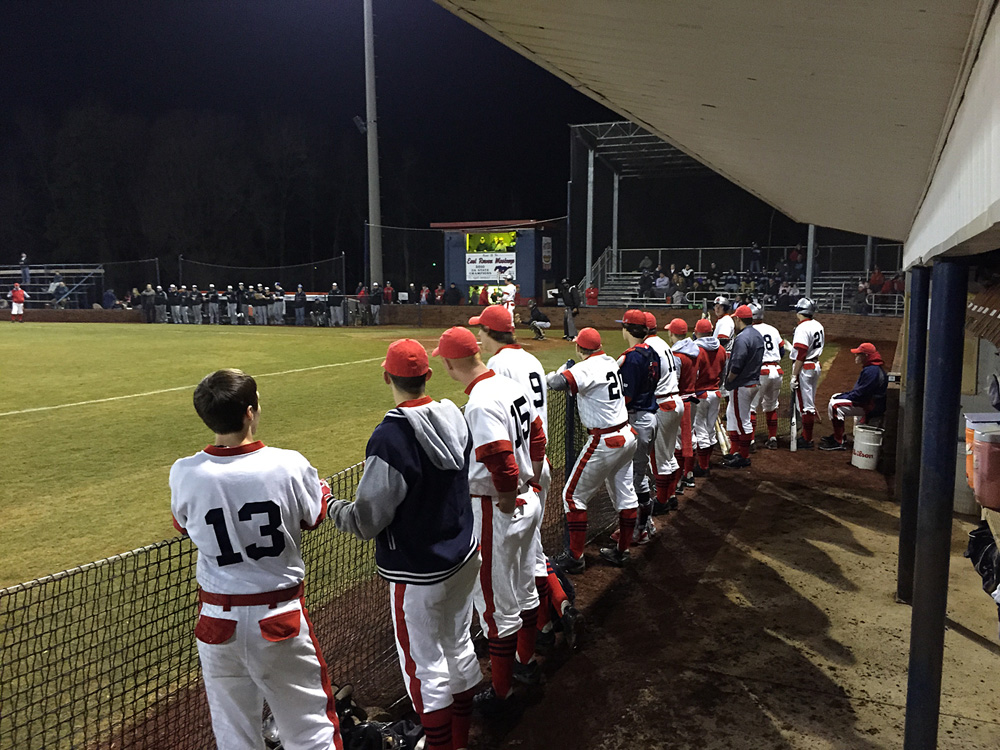 ADAM HOUSTON/SALISBURY POST With East Rowan's Samuel Wyrick batting, members of the Mustangs' baseball team are in the dugout Wednesday at Staton Field in the first game of the 2015 season. East Rowan went into South Piedmont Conference play right off the bat with a game against Cox Mill.

GRANITE QUARRY — The conditions were less than ideal, but the East Rowan Mustangs followed their intended formula and opened the baseball season with a key conference win Tuesday at Staton field.

“We are definitely a fifth-, sixth-, seventh-inning team, no doubt,” Peeler said. “That is when we try to pull off our key hits. I was just trying to do my job and help the team out.”

The 6-foot-4 power pitcher, a UNC Wilmington commit,  used just 76 pitches in six innings of work, striking out seven, walking two and overcoming a pair of unearned runs in the early going.

“I threw mostly my fastball but worked in my curve ball on special counts,” Peeler said. “I also threw my change-up a few times for effect.”

The season opener was on the chilly side with a misty rain falling during the middle innings.

The weather and a lack of practice may have affected East Rowan early as they committed an uncharacteristic five errors and did not record a base hit until the fourth inning.

“That’s what we are all about,” Hightower said. “We play the first four innings to see where that puts us then we look for the timely hits in the fifth and sixth. To start with a conference game and get a win, that’s good.”

The Mustangs (1-0, 1-0 SPC) took advantage of four walks by Cox Miller starter Julian Smith in the first to take a 2-1 lead. The Chargers (0-1, 0-1 SPC) scored first on a walk a single and a two-out error by shortstop Ike Freeman. The Chargers tied the game in the third on two more East Rowan errors by Jackson Justus and Tyler Scruggs and a walk.

The Mustangs untied it in the fifth thanks to Towne’s big double and a wild pitch. Then in the sixth they jumped on a pair of Cox Mill relievers with singles by Sam Wyrick, Freeman, Scruggs (two RBI) and Tanner File to expand the final margin to 9-2.

Right-handed sidewinder Alec Hamilton came on to close it out for East Rowan in the seventh inning and got a big double play, the second of the game, to end it.

The defending SPC champion Mustangs are coming off a 22-8 season that carried them to the third round of the 3A state playoffs. They return to league action Friday at Carson and have a nonconference game at home with North Davidson, weather permitting. Mooresville is scheduled at Staton Field on Saturday. Hightower says he and his Mustangs are just glad to be back on the field for a new season.

“There is no better feeling,” he said. “This is what I live for.”