Darts & Laurels: Making the most of a snow day 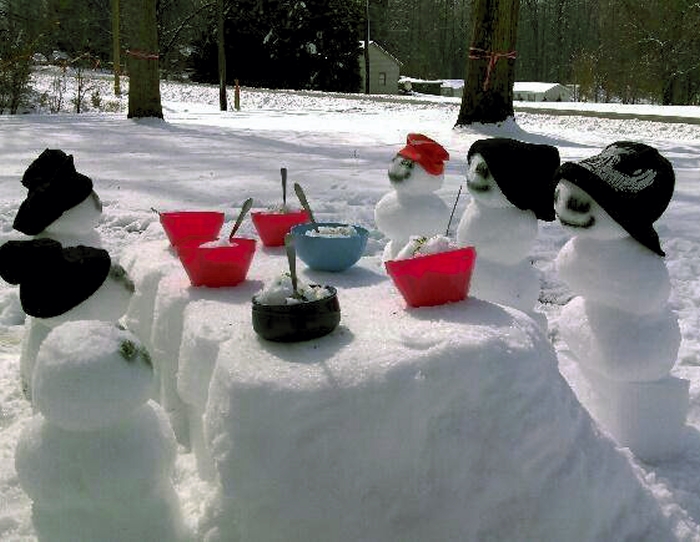 Faye Sutton, who works at Landis Elementary School, made a snow replication of a school lunch. Submitted

Laurels to all the Rowan County residents who found ways to be productive and creative Thursday after a winter storm dumped half a foot or more of snow on some parts of the county. While it forced schools to close, the snow didn’t shut down everything. Rowan-Salisbury’s nutrition staff held a snowman-building contest that yielded some creative results. Some educators spent the time viewing educational webinars or working on lesson plans at their homes. Others got together and talked shop. The snow revived a tradition in China Grove, as parents from all over brought their kids to a popular sledding hill. China Grove police closed off traffic to keep them safe and provided hot chocolate to take off the chill. John Walters cleared the runway at the Rowan County airport, as others did county roads. Many got out their shovels to clear driveways as others helped friends and neighbors who’d lost power. It’s a misconception that a few flakes of snow can paralyze Southerners, as Rowan residents proved Thursday.

Dart to what looks like the on-air loss of two well-known and well-liked Rowan County radio personalities. Kent Bernhardt and Howard Platt have both been on the local airwaves since the 1970s. They have co-hosted the “Kent and Howard in the Morning” from WSTP 1490 AM on Statesville Boulevard for two long stretches — 1995 to 2000 and again from 2008 until Friday. It appears that era has come to an end, however, as the Catawba College Foundation bought the station last year and Bernhardt and Platt’s contracts with the previous owners expire this weekend. The foundation also purchased WSAT and plans for both of the stations to help educate Catawba College students studying communications. The current WSTP morning hosts, whose show has aired at 6 a.m. weekdays, haven’t been told what listeners will hear, but Bernhardt said, “My alarm won’t be set Monday morning.”

Laurels to Eleanor Qadirah for not giving up on the Blues and Jazz Festival. This year’s event, set for May 16, will be the 16th edition and comes after a one-year hiatus. The Rowan Blues & Jazz Society puts on the festival, but Qadirah spearheads the effort, and she’s not letting it fade away. She’s not even letting her own recent heart problems and a hospital stay keep her from promoting the event and rounding up sponsors. It’s good to see the festival return — it adds something valuable and diverse to the culture of Rowan County. And it’s good to see Qadirah back at the helm.