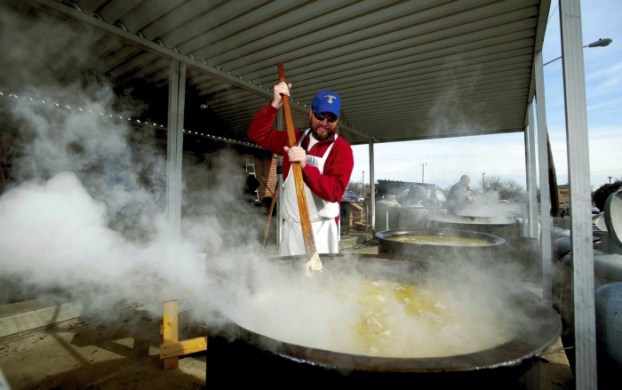 Masonic Lodge members truly are ‘Brethren of the Stew’

SALISBURY — For the record, here are some of the numbers.

Throw in peas, corn, tomatoes, lima beans and spices, and it all adds up to some 600 gallons of Brunswick stew, done the tried-and-true Masonic way.

For $6 a dinner, you can dine in or carry out. The dining-in takes place at the temple from 11 a.m.-2 p.m. and from 3-7 p.m. If you dine in, it’s all the stew you can eat, plus a drink and crackers. Homemade desserts also are available for a low price.

Carry-out orders include a 16-ounce bowl with crackers and a dessert, but no drink.

When it’s all said and done — and if folks prove to like a hearty meal on a wintry day — more than 7,000 people could be eating Brunswick stew today. Mason Todd Hildebrand said the snow forecast could make this Brunswick Stew one for the lodge’s history books.

As you can imagine the stew preparation hit high gear Wednesday morning, even with an ominous weather report.

Ten giant pots, heated by enough propane to make Hank Hill proud, were cooking all the meat on the porch out back Wednesday morning, The pork and chicken had to be pulled, then all the meat cooled for hours inside.

Using a cleaver that resembled a machete, Will Sandridge was chopping up onions.

“I’ve cried so much that I think I’m not crying anymore,” said Sandridge, who had built up an immunity to tears.

The recipe and process for Andrew Jackson Lodge 576’s Brunswick stew is a tightly guarded secret trusted to only four Masons at a time. Right now, the recipe and timing for how it all goes together is staying with cooks Dennis Sims, Bob Himes, David Potts and Currie Pendleton.

Pendleton is the newest cook to be given the sacred recipe.

The actual cooking of the stew was set to begin about 3 a.m. today. The meat and potatoes are among the first ingredients to go in, and when the potatoes are added, the stirring starts.

The stirring doesn’t let up over 17 different pots.

Sims and other Masons say the best thing about their stew is its texture and consistency, aided by the fact that they grind everything except the tomatoes and corn. It all leads to a stew with a light brown color throughout.

It’s not an exact science, but the cooks know what they’re after.

“There’s a lot of taste-testing,” Sims said Wednesday. “Sometimes we all four agree. Sometimes we don’t.”

Floyd Burton has been around for all 58 Brunswick stews. He and fellow Mason John Miller started the annual event in 1958. They brought the idea and knowledge with them from the Kiwanis Club, which gave up on the stew and turned to pancakes for its major fundraiser.

Burton said that first two-pot Brunswick Stew, cooked over wood, raised $749. These days, the annual stew raises some $20,000 for Masonic charities, including the Masonic children’s home in Oxford and the WhiteStone retirement community in Greensboro.

The money also supports local causes. None of the money can go to lodge facilities and operations.

“It’s got to be for charities,” Sims said.

Rex Stafford was the first chief cook in 1958, followed by L.E. Poteat in 1959-60. But Burton and Rayvon Curran, who died earlier this month, became the Masons probably most associated with the stew.

Burton served as chairman of the event for 20 years. Now it automatically goes to whomever is junior warden, so this year Tony Hoty has the honors.

Burton can’t believe what an operation it has grown into but, of course, he’s not complaining. “It takes a lot of people to do it,” he stressed again.

Each Mason in both the Andrew Jackson and Fulton lodges receives 20 tickets to sell for the Brunswick Stew. The same is done when the Fulton Lodge has its barbecue in October.

Stew day becomes a countywide event for Masons, and you often see members of every local lodge helping out.

The Andrew Jackson Lodge Masons consider themselves the “Brethren of the Stew,” and Hildebrand has had T-shirts printed up saying just that.

What will Burton be doing today, if the weather permits? He plans to deliver Brunswick Stew to all the people to whom he sold tickets.

A ‘Miracle’ on Overhill Road: Kitten brought in from the cold

By Mark Wineka mark.wineka@salisburypost.com SALISBURY — It all came down to tuna. Last week, during wintry precipitation and record-setting low... read more