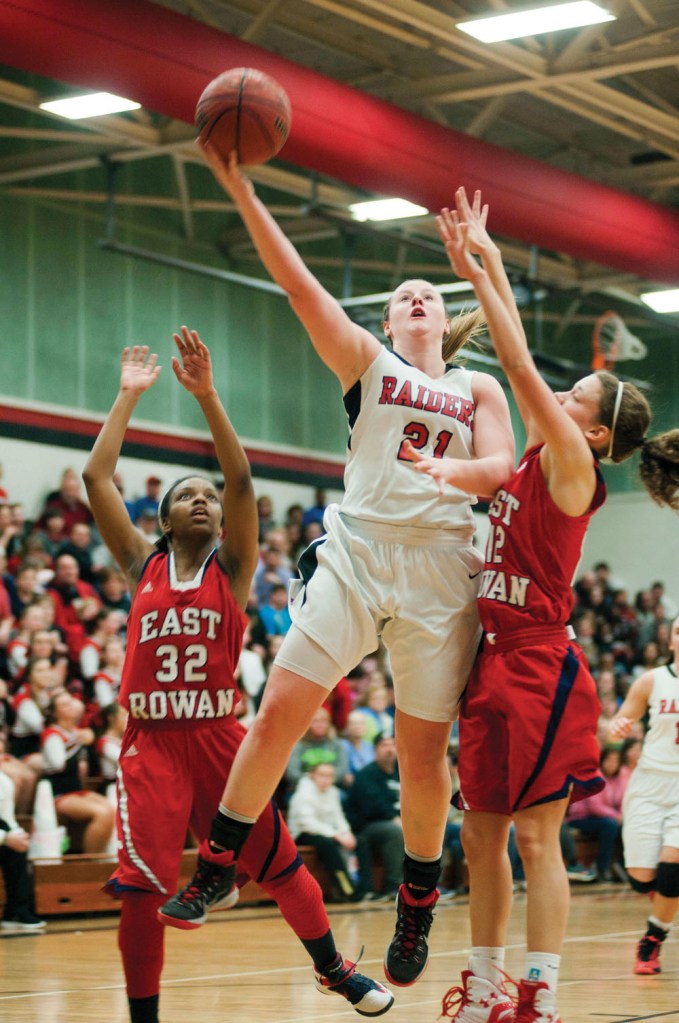 PHOTO BY JON C. LAKEY/SALISBURY POST South Rowan's Cassidy Chipman (21) goes up as East Rowan's Shenique Pharr (32) and Jocelyn lowe (12) defend in the regular-season finale on Feb. 13. Both teams are at home Wednesday in the first round of the 3A state girls basketball playoffs.

A light snowfall and the closing of schools in the area forced teams to rearrange their schedule. This time it’s the first round of the N.C. High School Athletic Association state basketball playoffs.

None of Rowan County’s nine boys and girls basketball teams played Tuesday, what was scheduled to be the first day of the state playoffs. All eight games — Salisbury’s and North Rowan’s boys play each other — were moved to Wednesday.

The Cavaliers are the only team from Rowan County with game experience in the last week. It was a 71-57 loss to Lexington in the Central Carolina Conference tournament championship.

Head coach Andrew Mitchell said the double-digit loss was a result of being rusty because of a weeklong layoff.

“We have to be focused and defensive minded (to win),” Mitchell said. “We have to stop them defensively because they have guys that can score.

“…We’re excited about the game. We know it’s tough playing a team three times in a row and beating them, especially when they’re your hometown rival.”

Other teams had small chances to practice since snow and ice started to fall. South Rowan’s girls were in the gym Friday, Saturday and Monday. Though those practices were truncated.

The No. 10 Raiders’ senior-laden group doesn’t give head coach Jarrod Smith the level of concern as a younger group would ahead of a first-round game against No. 23 Asheboro.

“The girls know what they are supposed to do,” Smith said.

“It’s not just Rowan County schools. Everybody is going to be rusty,” Smith said.