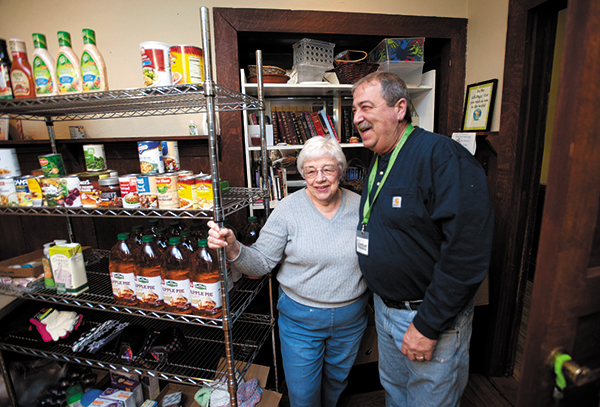 JON C. LAKEY / SALISBURY POST Main Street Mission volunteers Frances Staton and Frank Mano share a laugh during a lull in the day. A cold rain kept the numbers of "neighbors" from coming to the Main Street Mission which let the staff of volunteers have a calm day of making sure that people in need of food had a place to come. on 1/23/15 at in China Grove, NC, .

Three years ago Frank Mano walked into Main Street Mission on a busy day and asked if they needed help. Mano was asked to return on a less busy day and he’s been returning ever since.

Mano, 62, has been coordinating volunteers and services at the mission, located not far from downtown China Grove.

Executive Director Anne Corriher said there were always volunteers but there just wasn’t anyone who volunteered on a consistent basis.

Mano stopped working after a stroke in 2009 and simply wanted something to do with his time following rehabilitation.

“I wanted to give back,” he said simply.

Mano knew he wanted to volunteer with a nonprofit and the mission was conveniently located in China Grove,  where he lived.

Mano worked in construction his whole life and spent a lot of time on the road. He then went to work for Sunbelt Rentals where he ran the Salisbury office.

Although he doesn’t recall the incident, Mano was told he had the stroke at his daughter’s birthday party. He did remember his wife, Jackie, and his children, but there were a lot of memories Mano still has not recovered.

He didn’t require physical therapy and wanted to return to driving as soon as he possibly could. Mano tried to work at the equipment rental company, but found it required multitasking skills that he no longer possessed. When Sunbelt Rentals realized Mano wasn’t going to be able to continue as he’d once had they were forced to close the Salisbury location.

It Takes A Village

In the early days, Mano would collect donated items from Food Lion and deliver them to the mission. Once at the mission he would then sort the food items in the mission’s pantry.

Much like his construction days, Mano is still on the road, but this time he’s serving a larger purpose. He routinely takes a load from Thompson and Son Processing Plant where the Albemarle business gives the mission deer meat.

It takes a village to help the mission continue its efforts to help “neighbors” in the South Rowan community. Some of these local and regional organizations include Second Harvest Food Bank in Charlotte where Mano also collects food items for the mission. He works with local churches, students from South Rowan High School’s Future Farmers of America, who donate vegetables from their garden and eggs from their chickens.

The mission also receives donated items from Food Lion including pastries and bread.

Mano sometimes will buy a 100-pound bag of rice, beans or other items and the students will help separate the item into smaller individual bags.

As director of operations, Mano’s biggest responsibility is essentially “taking care of the house.”

He said he finds that volunteers rarely say no to taking a day off, including himself.

What gives Mano joy, he said, “to know that he’s helping someone in need.”

He’s rarely sitting down and moves about to where he’s needed or can be found talking to someone.

His family, he said, understand the mission is where he’s supposed to be. In fact, his wife, Jackie, also volunteers two days a week.

“She knows this is my place. The Lord put me here,” Mano said.

Main Street Mission operates with the help of many volunteers and partner agencies including Second Harvest Food Bank in Charlotte. Mano has made many trips to Charlotte to collect food to stock the mission’s pantry.

In August 2014, the nonprofit added to their services by providing a 15-week Bridge Builders program called Getting Ahead. The program consists of counseling and empowerment through life skills. The program is families living in instability who are ready to take steps towards stability. Participants learn how to set goals and how to make better choices.

“We are now trying to enable people to better feed themselves,” said Executive Director Anne Corriher.

There are 12 families in the 15-week program.

“They learn how to get ahead in a world where sometimes you’re just getting by,” Corriher said.

Ron Brown is one of those neighbors who has participated in the Bridge Builders programs and is on his way to a more stable life, he said.

Brown found himself without a job after moving to North Carolina, his car was in need of repairs and eventually he was behind on paying his property taxes. He also had some medical and dental issues that needed to be addressed.

“I was treading water and I found Main Street Mission,” he said.

He became socially isolated and rarely left his house.

“I thought, ‘this is an opportunity to get ahead,'” Brown said.

His life has been changed, Brown said.

He now has a job working at a Thai restaurant and is getting back on his feet.

Corriher said the volunteers and staff at Main Street Mission want to create a home-like environment for the people who come in to obtain assistance.

“It’s not just about food, it’s about a quality of life. We want to help them live a more abundant life,” Corriher said.

She said through the Bridge Builders program it’s the first time they’ve been able to offer more than just food to their neighbors. In some cases, the volunteers undergo the class as a way to learn about the differences between economic class and ways they can all work together to make the community more stable.

“We see so many people who don’t have the means to get out of their situation,” she said.

In December 2014, the mission established a new program — Christmas with Dignity — a low-cost store that affords parents the opportunity to buy gifts for their children. The idea behind the store was not to create dependency upon charitable giving, but to empower the parents to give.

Those parents who could not afford the store items could work at the store and “build up credit,” Corriher explained.

The Rev. Jerry Hagler also volunteers and counsels with clients, who are called neighbors at the mission. Hagler also sits on the board of directors.

He said not everyone who receives services from the mission is homeless, some are working people who just don’t make enough money to provide food for their families.

If there’s an expert on 3-year-olds in Rowan County, it’s Frances Edwards. The veteran preschool teacher has taught the same... read more