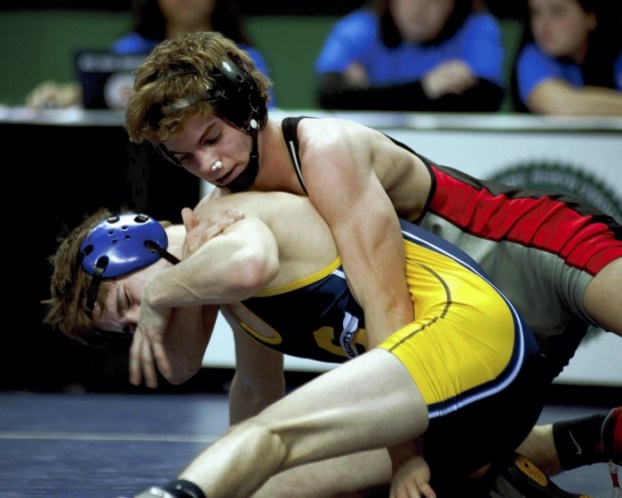 GREENSBORO — You don’t have to be a history major to appreciate what South Rowan’s Logan Durham and Carson’s Brandon Sloop accomplished Saturday night.

Each captured a 3A state wrestling title at Greensboro Coliseum, etching their names into their respective school record books. Durham, a 113-pound senior, placed a finishing stroke on his second consecutive unblemished, state-championship season with a 10-1, final-round win against South Iredell’s Matthew Insogna.

Durham wasn’t taking a back seat to anybody this winter, completing the season with a 34-0 record — a year after going 31-0 to capture the 106 crown — and finishing his career with a 128-14 mark.
“I came here with a mindset to win this thing,” Durham said after stopping Insogna in the final round. “I have a goal every year. Last year it was just to win it. This year I wanted to become South Rowan’s first two-time champion. It’s not easy to do.”

It was this weekend. Durham’s body of work included two victories by technical fall and a 7-0 win in the semifinals before he dominated Insogna (39-4), a season-long practice partner. “He’s one of my really good buddies. I train with him all the time,” Durham said.

It hardly mattered once the bout started. Durham collected a sit-in-the-corner takedown and a near-fall to build a 5-0 in the opening 43 seconds. Another cat-like takedown with 1:15 remaining gave him a commanding 8-0 lead and from there it just a matter of playing defense.

“I knew he was blocking up and going to try something big,” said Durham, who wrestled in the third period for only the third time this season. “It’s the state finals and when you’re down big, you’ve got to try a big move.”

When it ended, Durham extended his arms toward family members and friends in the Coliseum seats, then sprinted up the steps to greet them. His immediate plans were to go to Cracker Barrel and in April, you guessed it, enjoy a trip to Disney World.

“I’m so excited for him,” said first-year South coach Josh Yost. “He’s worked so hard, not just this year but for 10 years. To do it in the fashion he did, going pretty much untouched, is just incredible.”

Sloop (40-3), one of three Carson wrestlers to climb the awards stand, won four knuckle-to-knuckle decisions in the tournament. He credited his effort to last year’s third-place finish, a disappointment that has lived rent-free in his head all season.

“It was the worst feeling ever,” he said through a blood-stained upper lip. “It felt like I’d been hit by a truck. It hit me and I wanted it so bad. So this summer I went to work and never stopped.”

His reward came shortly after 9 p.m., some nine hours after he outpointed Swansboro’s Dakota Wakefield, 8-5, in the semifinals. In a match without a takedown, Sloop scored on a second-period escape and again when Harris was penalized for stalling.

“I really learned to get over my nerves this time,” he said. “I knew I had one last shot. This was my last match so I gave it all and figured whatever happens happens.”

Sloop survived one final test-of-nerves when the match was stopped with six seconds remaining for blood time. He was treated by an on-site athletic trainer, then held Harris off. “That was for pride,”he said. “Everything I’d worked for came down to that last six seconds. I wouldn’t trade it for the world. All that hard work was worth it.”

Carson coach Bryce Vandenburg was elated for Sloop. “So happy for him,” he said. “As a coach, you don’t get someone like Brandon very often. This was special.”

If it seemed like Salisbury’s J.C. Burton was making up for lost time, he was. The senior 182-pounder wrestled back to earn a third-place ribbon.

“I’m happy because it’s an improvement from last year (fifth place),” he said after stopping Stephan Phillips of Chase, 3-0, in the 2A consolation final. “This year I was hoping for first, but it didn’t happen.”

That’s because Burton (46-6) — who has been accepted at Davidson College — suffered a 4-3 quarterfinal loss to Phillips on Friday night. In the rematch he kept his feet and arms in motion and effectively worked angles.

“This is sweet,” Burton smiled afterward. “It was more like revenge. I had something to settle with that kid.”

Placing third in the 4A bracket was Davie County senior Parker Correll (220), who pinned Millbrook’s Vincent Ngwu in 3:06. It gave War Eagles’ quarterback 50 wins in 54 decisions this winter.

“It’s definitely way better than last year, when I qualified for states but didn’t place,” Correll said. “But I wanted more. I wanted to be in the finals. Third (place) is about the next best thing.”

Ngwu put up a strong fight before Correll caught him midway through the second period. “When you come to the states it doesn’t matter,” he said. “You’ve got to wrestle like he’s the best guy in the state.”