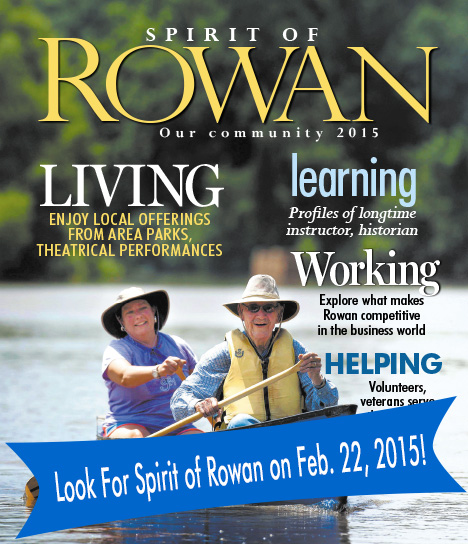 Welcome to the Spirit of Rowan

Ask anyone who has made Rowan County home — this community has its own distinct character. Situated between the Charlotte and Triad metro areas, Rowan has a spirit of independence and self-reliance. We don’t follow the crowd or discard tradition. We hold tight to what lasts.

This Spirit of Rowan publication celebrates some of those lasting values and people who embody them.

When the Post news staff brainstormed all the people and resources that help make up Rowan County’s spirit, the list grew long. We decided to focus on four areas: living, learning, working and helping, four actions that often entertwine in our daily lives. Here’s a preview:

• Outdoors and health: As reporter David Purtell says, there’s something about the outdoors that inspires, uplifts and nourishes us all. Outdoor activities also can help us stay healthy and strong. Rowan is rich in places where people can connect with nature, take a hike, go kayaking or even take a ride in a paddleboat — from Eagle Point Nature Preserve to municipal parks, from the mighty Yadkin to the pond at Dan Nicholas Park.

• On stage: Theater is bursting out all over Rowan County, just one aspect of the flourishing cultural arts in Rowan. Writer Deirdre Parker Smith describes the breadth and depth of the theater arts here, from high school productions to a new readers theater for senior citizens. The greatest challenge is to avoid overlapping productions. Some people would call that a high-class problem.

• Young students: Speaking of class, Rowan is full of lifelong learners, and this Spirit of Rowan edition focuses on the beginning of that process. Can you imagine spending 25 years with 3-year-olds? Reporter Jeanie Groh talked with Frances Edwards, a teacher at the First United Methodist Church preschool who has done just that. She gets hugs and unconditional love; the children get a good start on their education.

• Cherished stories: An appreciation for our past is strong in Rowan , and it’s hard to imagine anyone appreciating it more than Terry Holt. A retired high school history teacher, Holt is a big part of Rowan Museum’s success and a lot of other activities, too, reporter Mark Wineka found. Whether as a professional educator or a volunteer, Holt has found his calling in bringing history to life.

• Cutting-edge manufacturing: Since the late 1800s, manufacturing has been the backbone of the Rowan economy. Reporter Josh Bergeron says emphasis is shifting to “advanced manufacturing,” which uses technology to improve products and processes. And he found a good example in Integro Technologies, using vision technology and software to boost quality control.

• Grown here, eaten here: The national movement toward eating locally raised produce and meats has found fertile ground in Rowan, according to reporter/editor Deirdre Parker Smith. She shares the story of Eric Bowen, who is working to make both the Farmer’s Market and the Bread Riot food advocacy group help more families enjoy the bounty.

• Giving back: It takes a village to keep a nonprofit like China Grove’s Main Street Mission going, and volunteer Frank Mano is a key part of that village, reporter Shavonne Potts learned. Mano walked into the mission one day, asked if they needed help and quickly became a volunteer the mission can depend on. He says his wife understands. “She knows this is my place. The Lord put me here.”

• Honoring veterans: Rowan has a broad streak of patriotism and appreciation for those who serve in the military. Few exemplify this sprit more than Bobby Mault, whose interest in preserving military memorabilia has grown into a full-fledged museum. Reporter Mark Wineka shares Mault’s story of watching his brothers go off to war. “I think to this day I was left behind to do the museum,” Mault says.

Post photographer Jon Lakey and freelancer Wayne Hinshaw shot the photos for Spirit of Rowan 2015, and the man behind the beautiful design is Andy Mooney, our chief page designer, copy editor and go-to-guy extraordinaire.

Reflecting on what makes Rowan special, we are reminded how blessed this area is in resources and resolve. Folks here like to make a difference, and countless people do that every day. We hope you enjoy reading about a few of them.