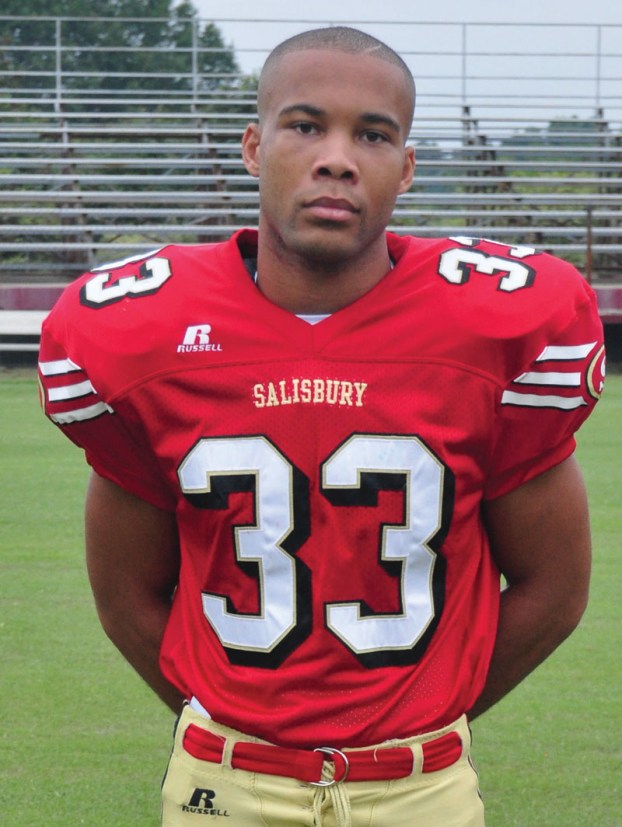 Prep wrestling: Burton a 2A contender at 182

SALISBURY — The state wrestling tournament starts Friday in Greensboro, and Salisbury senior Jeffrey “J.C.” Burton, who competes at 182 pounds, has prepared as meticulously as anyone for success.

Part of his preparation has included steering clear of Wal-Mart, not that he has anything against the retail giant. It’s just that accidents happen.

“The night before last year’s state tournament, J.C. went to Wal-Mart for a meal, he’s at the register checking out, he reaches down for something, and he cuts his leg open on a piece of glass,” Salisbury coach Tim Pittman said. “He needed 18 emergency stitches. So when he wrestled in the state tournament, he was wrestling with a fresh wound.”

Burton still battled his way onto the podium last season. Under the circumstances, his fifth-place finish was remarkable. But Burton doesn’t like to make excuses.

Ask him about 2014, and he doesn’t mention the 18 stitches. Instead, he talks about the mistake he made in the second round of the tournament when he was leading 8-0 against North Brunswick’s Evin Bellamy.

“He caught me with a Peterson (roll) and pinned me,” Burton said. “I was in control of that match, but I made a careless mistake.”

After that blunder, Burton regrouped. He prevailed twice in the consolation bracket and earned the chance to face Bellamy again. In the rematch, he pinned Bellamy (for fifth) and finished his junior season 38-10.

“He’s talked about that loss he had ever since,” Pittman said. “He’s been like, ‘What would have happened ?’ That one mistake has haunted him a little bit.”

Burton has enjoyed the advantage of having a father (Jeff) who is a knowledgeable coach. The older Burton currently assists Pittman, along with Shane Miller. Pittman has known the Burtons a long time.

“I remember J.C. getting started in third grade,” Pittman said. “He’s always had a drive to win and he’s always been a very intelligent kid. There’s not a day at practice that he doesn’t ask a question about how he can do something better.”

Burton traveled to Oklahoma City last summer as part of the North Carolina Junior National team. Team North Carolina was coached by Davidson assistant Erik Wince, and Davidson is almost certain to be Burton’s next academic challenge. Burton said he has a 4.3 GPA, has already been accepted by Davidson and would be a welcome addition to the prestigious institution’s wrestling team.

In football, Burton is a standout linebacker for the Hornets. He was the team’s leading tackler last fall and was named to the All-County team. He plays football at close to 200 pounds and competed in the 195-pound class in wrestling as a freshman and a sophomore.

“I qualified for states my sophomore year at 195 and I did win two matches,”  Burton said. “But it was mostly a learning year.”

“Coming off the football field, I missed the first wrestling match this season, but it’s not hard for me to get down to 182,” Burton said.

Wrestling at 182 means a big challenge locally because that’s also where East Rowan power Shiheem Saunders, a 3A state qualifier, wrestles. Saunders was MVP of the Rowan County Meet after winning a marquee matchup with Burton.

“We’ve got some great wrestlers in the county from 160 to 190,” Pittman said. “They’re good friends. They’re at different schools now, but they wrestled together when they were young kids.”

Burton won the 2A Midwest Regional last week, leading Salisbury to a fifth-place finish. He beat North Surry’s Zack Martin in a 6-3 decision in the final. Both Burton, who takes a 41-4 record into the state tournament, and Martin are among the best at 182.

“Martin had beaten me earlier in the year (in overtime) in the Blackhawk Invitational in Wilkes County,” Burton said. “We had another match with him in the regional. I got a couple of takedowns and was able to stand up on him one time.”

Snow, ice and cold wiped out school this week, but Burton has stayed active .

“No sledding – I’ve got to play it safe,” Burton said with a laugh. “But I’ve been able to work out on my own and with my teammates at the Y.”

Pittman put Burton on the scales Thursday and said his star pupil has maintained his weight. He likes his chances of doing special things in Greensboro.

“He was disappointed with being fifth last year,” Pittman said. “He’s got something to prove, and he’s one of those kids that’s not going to be satisfied with with placing. He wants to win.”

The Associated Press DURHAM, N.C. (AP) — Little has gone right for No. 15 North Carolina of late. The Tar... read more