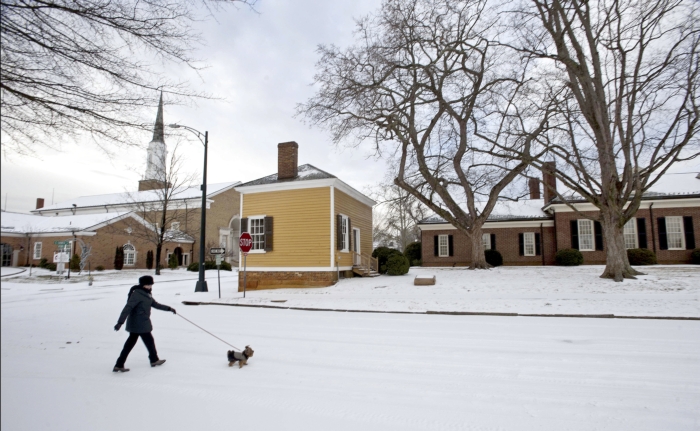 Update 8:45 a.m.: Traffic is moving steadily and slowly along Innes Street, which has been scraped. The center of the road remains covered in sleet and slush. Side streets have not been touched. The area around Novant Health Rowan Medical Center has also been scraped.

Post photographer Jon C. Lakey is out taking pictures of the winter not-so-wonderland. About 800 people in Rowan remain without power, along and to either side of Old Mocksville Road, from just beyond the hospital, through the Country Club area, across East Ridge Road and beyond, including Hawkinstown Road and Seventh Street Extension. Duke Energy is still assessing damage and has no estimated time of repair. Duke reports they have already restored power to 64,000 customers.

Gov. Pat McCroy and N.C. Department of Transportation are urging people to stay off the roads, if possible. One caller reported I-85 from Webb Road to Jake Alexander has not been scraped.

Update, 7:10 a.m.: Cars are moving well on Innes Street, melting some of the thin ice that was left by scraping. the temperature remains at 19 degrees with thick clouds in the sky.

Many towns in Rowan County are operating on a delay today. Check out the closings and delays on our site.

The winter storm warning was cancelled this morning at 4:15, as sleet, snow and freezing rain ended.

Driving conditions are quite slippery, at least from Spencer to Salisbury. Innes Street has been scraped, but that has left a thin layer of ice. Where streets are not scraped, a little snow on top of the sleet pellets gives a bit of traction.

Walking on the mix takes some concentration. Again, the thin layer of snow helps with traction, but underneath that is a thick layer of compressed sleet.

Temperatures are around 19 degrees, but the wind has not picked up yet

The ice- and snow-covered streets might melt a bit during this afternoon with a high of 34, but whatever is left will freeze hard tonight, when the low will be 20 degrees.

According to a statement issued by Frank Thomason through ReadyRowan, the county did not get the expected freezing rain, so limbs and power lines were mostly spared. About 900 Duke Energy customers northwest of Spencer are without power. That includes a section of Old Mocksville Road, Seventh Street and East Ridge Road around the Ellis Crossroads area.

Today will be cold and getting around will be challenging, but Wednesday brings an even deeper cold, with a low of 4 degrees. Thursday’s high will only be 19, with gusty winds, and the low will be even colder, around 2 degrees or less in outlying areas.