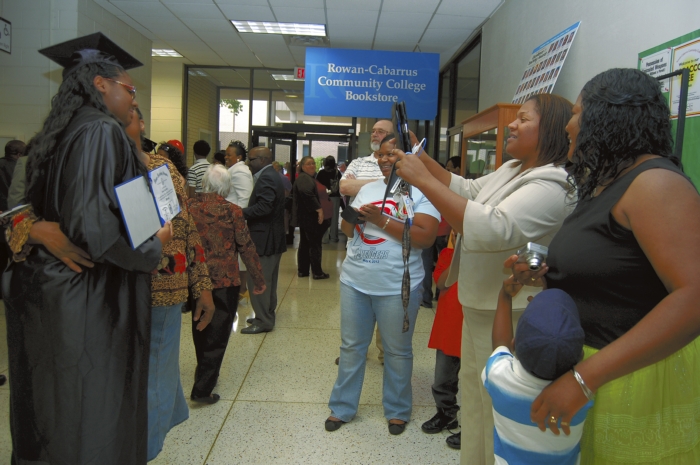 Tami Jefferies takes a photo of her daughter, Lexus Bruce, with a tablet after the Rowan County Early College graduation in May 2012.

Learning that Rowan-Salisbury schools made four Bs, 15 Cs, 14 Ds and one F is only part of the story. How does this compare with surrounding counties?

Again, the grades tend to correlate with income levels. In the town of Mooresville, where the median household income is $61,003, the small school system received one A and six Bs.

Davidson County’s socioeconomic factors are more like those of Rowan. Davidson’s median household income is $43,083, compared to Rowan’s $41,495. Schools in Davidson received one A, five Bs, 22 Cs and four Ds. Lexington Schools, which have not merged with the county, add three Cs and two Ds to the mix.

Before we get lost in alphabet soup, let’s cut to the chase. Rowan-Salisbury Schools need to change their trajectory, as Superintendent Dr. Lynn Moody says. At the same time, residents should know the schools’ performance record goes hand-in-hand with the local economy. The challenge is to defy the dynamic and achieve higher scores regardless of incomes.

The other result that jumps out at anyone looking at different districts is the Early College constant. In every system that has one in this region, Early College programs came out on top in performance grades. That should be no surprise; these schools are comprised of college-bound students who are highly motivated. Still, there may be aspects of Early College that could be applied in the traditional high school setting to help students succeed.

Leonard Pitts: This betrayal is worse