Man on bicycle dies after being struck by train 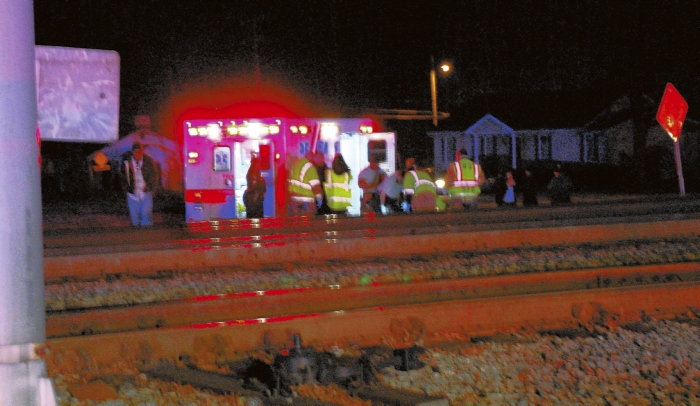 A man was killed Tuesday night after he was struck by an Amtrak train, not shown, near the intersection of 11th Street and Lexington Avenue, behind Performance Produce. A witness said the man "tried to beat" the train. Emergency personnel including Rowan EMS, Salisbury Fire and Salisbury Police performed CPR, but officials say it was unsuccessful. A Norfolk Southern train, not shown, was halted from continuing on the track. Shavonne Walker/Salisbury Post

Willie Mitchell was waiting for the railroad crossing gate at 11th Street and Lexington Avenue, near Performance Produce, when he saw a man who “tried to beat” the train.

The man, whose name was not immediately available, died Tuesday night after he was struck by an Amtrak train.

Mitchell said he saw the man, who was riding a bicycle, raise up and pedal faster. Mitchell said the man tried to race across the tracks ahead of the train.

He believed the pedestrian was caught underneath the train, but he was thrown several feet off the side of the tracks.

Mitchell said someone in another vehicle called for emergency help. Someone in that vehicle ran to check on the pedestrian, he said.

She said two fire stations responded — Salisbury stations No. 3 and No. 1.

Rowan EMS and Salisbury Police responded to the scene and worked to perform CPR on the man.

A Norfolk Southern train that was heading in the same direction was halted on another track. The incident occurred around 7:30 p.m. The train tracks were cleared sometime after 9 p.m.

Casey Parsons to be sentenced next week in federal…