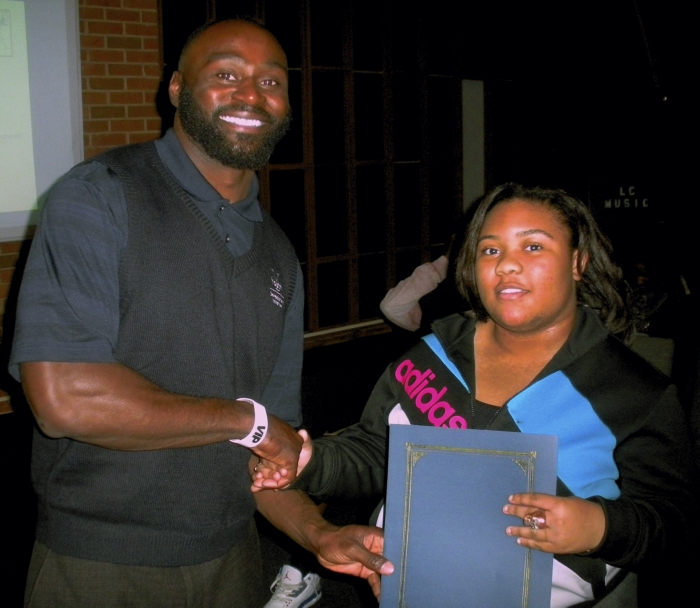 To qualify, the students had to complete seven interactive projects from their life skills training and give oral presentations to a group of Livingstone College mentors about themselves, their career choices and their individual action plans to reach their goals.

The students, who primarily attend Salisbury and North Rowan high schools, now move on to a 12-week, individualized mentoring process in which they work closely with trained Livingstone College students to construct a digital Life Skills Portfolio, create an online profile to upload and manage their digital portfolios and establish and pursue personal academic and literacy goals.

The second LIFT session will start the week of Feb. 23 and will run through the end of April.

For more information, contact LIFT Coordinator Javon Williams at 919-222-0300 or at jwilliams@ydiinc.org

For more information about Youth Development Initiatives, check out its website at www.ydiinc.org

For North Carolina’s graduating high school seniors, the time from now until March is one of the busiest on the scholarship calendar.

Scholarships help students turn their potential into success with a college education, and that success plays an important role in a competitive economy.

The N.C. Retail Merchants Association, www.ncrma.org, the statewide trade association, is now calling for scholarship applicants with plans to give away 46 awards worth $115,000 – 11 more than last year.

“The success of our state, its people and the business climate is based on the vitality of our communities,” said N.C. Retail Merchants Association President and General Counsel Andy Ellen. “We are dedicated to supporting education for students across our state so that we can connect them to opportunities in the economy.”

Forty-six awards valued at $2,500 each are available through the association and its grocery division, the Carolinas Food Industry Council. The awards are offered to high school and college students to support the 2015-16 academic year and focus on a retail background to assist those who may want to make retail a career with higher education.

Unlike traditional scholarship programs that only reward the highest level of academic achievement, these organizations recognize students whose academic credentials fall within an average to above-average range.

Applications and official transcripts must be received or postmarked by Monday, March 2. For more information or to apply go to www.retailpaysforcollege.org.

“Retail powers North Carolina’s economy with both large and small employers, supporting over 1.2 million jobs at headquarters and distribution centers,” said Ellen. “It also works to build a strong and sustainable job market driven by competitive innovation. We want to prepare a younger generation for the work force, and we hope to see many more students applying for retail scholarships.”

Applications for the 2015 academic year are now being accepted through Feb. 13.

Up to five scholarships, in the amount of $2,000 each, are awarded annually to students who demonstrate academic excellence, strong individual character and significant personal involvement in agriculture.

Following the completion of their associate’s degree, scholarship recipients will also receive a paid summer internship at a Southern States retail or agronomy location.

Another benefit of the scholarship is an invitation to attend the annual Southern States Management Meeting and Product Show held in September.

To be eligible, students must be rising college sophomores pursuing an associate’s degree focused on agriculture at an accredited university. They must also have a cumulative grade point average of 2.5 or higher on a 4.0 scale and be enrolled as a full-time student for the following fall semester. They must maintain a 2.5 or higher grade point average. Official transcripts must be submitted at the end of each semester to retain the scholarship.

For more information about the Southern States/John Deere Financial Scholarships for students in two-year, associate’s degree programs, including requirements and application forms, visit southernstates.com/scholarship or contact them through email at scholarship@sscoop.com.

Communities In Schools of Rowan County’s data from the 2013-14 school year shows an increase in students helped.

Students served by the organization are often the most at risk of leaving school early, but 95 percent of those students graduated with their peers last year.

“Student success is our business,” said Vicky Slusser, executive director. “We work with schools to provide students the support system they need to bridge gaps to learning, we know that when students succeed, communities succeed.”

Communities In Schools services are as unique as the students helped. By using a multi-tiered approach to meeting students’ needs, the organization is able to provide service to a whole school from behavior modification programs such to college fairs.

By developing one-on-one relationships with identified students in a school, Communities In Schools site coordinators are able to tailor individual student success plans to meet specific needs, such as removing barriers to school attendance or providing academic tutoring to increase outcomes.

Report findings were validated by third-party reviewer RTI International. The Quick Facts for Communities In Schools of Rowan County can be found online at www.CISRowan.org or e-mail for a copy at cisrowan@gmail.com

Debbie Insley, the director of wellness promotion at Catawba College, has been appointed by N.C. Gov. Pat McCrory to serve on the Governor’s 2015 Substance Abuse and Underage Drinking Prevention and Treatment Task Force.

A licensed clinical addiction specialist, Insley joined Catawba in August 2014 after serving in various roles for the past 21 years at the University of North Carolina at Charlotte.During the last 10 years of her tenure at the university, she served as director of the center for wellness promotion. She also served as co-chair of the Wellness Team and served as the chair of the Substance Abuse Committee.

Before departing the University of North Carolina at Charlotte, Insley started the first Collegiate Recovery Community on a college or university campus in the state. In 2014, she was recognized for her efforts in making the university a national leader in prevention and treatment and helped sign the Executive Order No. 52, which proclaimed that.

“Her Story Must Be Told: Women in the Holocaust” on tap for community forum at Catawba

Dr. Racelle Weiman has received international acclaim and numerous awards for her innovative and thought-provoking work in the fields of Holocaust studies, prejudice reduction and tolerance education and inter-religious relations.

As a specialist in teacher training, professional development and global networks, she often appears on radio, TV and in print media.

She has lectured or consulted in more than 30 countries across Europe, the Middle East and Southeast Asia.

At the next Catawba College Community Forum on Feb. 17, Weiman will reveal some of the amazing stories of women who stood up and stood out against the genocidal policies of Nazi Germany from 1933 to 1945.

These unsung heroes in the United States, Europe and elsewhere were at the forefront of a battle against the inhumanity represented by the Holocaust. At the same time, these women, often unknown and unrecognized, were leading the campaign for human rights and dignity for all — including equality for women at all levels of society.

In her talk, Weiman will touch on famous women in American politics and journalism as well as on some aspects of Jewish history and culture. She will also speak about the current crises for women in Syria, Iraq and Africa.

Dylan Housman, a student at Cannon School, has been selected to represent Concord as a National Youth Correspondent to the 2015 Washington Journalism and Media Conference at George Mason University.

National Youth Correspondents participate in hands-on, experiential learning through decision-making simulations that challenge them to solve problems and explore the creative, practical and ethical tensions inherent in journalism and media.

The week-long program, held at George Mason University’s state-of-the-art campus, will encourage and inspire young leaders from across the country who desire a unique experience focused on successful careers in this dynamic industry.

The Washington Journalism and Media Conference will be held July 12-17.

Kohl’s Department Stores’ Kohls Cares Scholarship Program announced it will award nearly $400,000 in scholarships and prizes to more than 2,500 students who have made a positive impact on their communities.

Nominations for kids ages 6 to 18 will be accepted Jan. 30 through March 13 at kohlskids.com.

“Children around the country are doing inspiring work in their communities every day, and Kohl’s is proud to reward these future leaders through the Kohl’s Cares Scholarship Program,” said Bevin Bailis, Kohl’s senior vice president, communications and public relations. “We encourage parents, teachers, neighbors and friends to nominate the outstanding youth in their lives, so we can honor and acknowledge young volunteers for their time, innovation and passion for helping others and making a difference this year.”

Ten national winners will each be awarded a $10,000 scholarship for higher education, and Kohl’s will donate $1,000 to a nonprofit organization on each national winner’s behalf.

Nearly 200 students will win regional scholarships worth $1,000 toward higher education, and more than 2,000 local students will receive a $50 Kohl’s gift card.