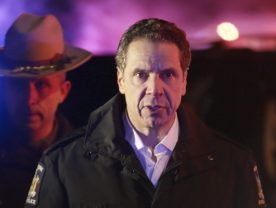 A TransAsia flight turned on its side midair and then careened into a river after takeoff from a Taipei airport, the latest plane disaster to beset Asia.

Just before the crash, the railroad gates came down on top of the stopped Jeep, which then tried to pull forward, authorities say.

In his prepared remarks for the Senate confirmation hearings, Ashton Carter will criticize both automatic cuts to the defense budget and expenditure waste.

5. WHAT THE CRACKDOWN ON GANGS IS CAUSING IN COLOMBIA

A military offensive against militias means there are fewer murders and kidnappings in the Latin American country. But it has given way to a rise in extortions and shakedowns.

6. BIGGEST CHANGE IN TV? HUGE RISE IN SUPPLY OF SHOWS

An outbreak of the disease leaves bosses facing a quandary about what to do in case they suspect an employee isn’t vaccinated.

8. HOW FUR TRAPPERS ARE CAUGHT IN GLOBAL ECONOMY WOES

Low demand from buyers in China and Russia, whose economies have slowed down, means catching fur-bearing animals isn’t as lucrative anymore.

After entering the plea in his murder case, the former rap music mogul is rushed to a hospital, complaining of chest pain.

Investors are seeing signs that the long-running collapse in oil prices could be ending.

The wind is over for a couple of days so we can enjoy mostly sunny skies and a high near... read more