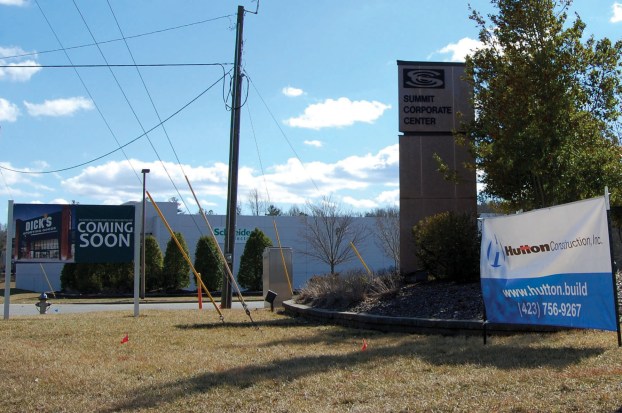 A sign announcing a Dick's Sporting Goods is "coming soon" sits near the entrance to the Summit Corporate Center off Julian Road. A Mexican restaurant, Salsarita's Fresh Cantina, is also going to have a location at the Shoppes at Summit Park, which is being developed by the Hutton Company.

Two stores and one restaurant can be added to the list of businesses that will be in a shopping complex currently being built off Julian Road.

Salsarita’s Fresh Cantina, Kirkland’s — a home furniture and decor store — and Mattress Firm are now included in a flyer for the site used by Providence Group, the Charlotte-based firm marketing the development.

Salsarita’s, a Mexican restaurant based in Charlotte, and Mattress Firm will share space in a 13,000-square-foot building on the east side of the complex. Kirkland’s will be on the end of the row of stores that includes Hobby Lobby and Dick’s Sporting Goods. Kirkland’s will have 7,500 square feet of space.

Documents filed with the county’s Register of Deeds show Kirkland’s has signed a lease for space at the complex.

The Shoppes at Summit Park is located near the entrance to the Summit Corporate Center off Julian Road near Interstate 85. Hobby Lobby and Dick’s are the anchor stores for the complex, which is being developed by the Hutton Co. of Tennessee. There is 23,000 square feet of space available for a third anchor store next to Hobby Lobby, according to the flyer.

There are also several plots of land in phase 1 of the site that can be used for future development. There are around 600 parking spaces in the phase 1. A large tract of land next to phase 1 is labeled as phase 2.

The Hutton Co., based in Chattanooga, has done work in Salisbury before. It was behind the Belk and Wallace Commons expansion off Klumac Road. After completing that, Hutton secured an option on land in the county-owned corporate park.

Not far from where the shopping complex is being built, more construction is currently underway in the Summit Corporate Center. Crews are working at the site where a California-based fuel company will locate its regional headquarters.

Agility Fuel Systems makes natural-gas fuel systems for large transport vehicles and has said it will hire nearly 150 people within three years for its facility in Rowan County.

Both the Shoppes at Summit Park and Agility Fuel Systems were announced late last year.

Salisbury City Council will consider approving a memorandum of understanding with the Elizabeth Holmes Hurley Memorial Park Foundation regarding the... read more