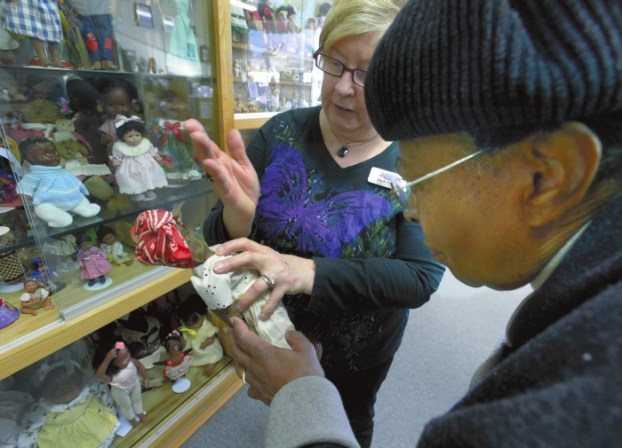 This doll is over 100 years old. Gayle Hansen is showing it to Aggie Harrington. It is on display at the Spencer Doll and Toy Museum during Black History Month. It belongs to a member of the Rowan Doll Society. photo by Wayne Hinshaw, for the Salisbury Post

Aggie Harrington remembers staying with her grandparents in North Carolina as a child and her mother sending her dolls from New York, where she worked.
The 82-year-old Harrington, who is African-American, also remembers that those dolls didn’t look like her.
“You didn’t have black dolls” in the late 1930s and early 1940s, when she was a child, Harrington said. “You could only get white dolls.
“You didn’t think about it,” she said. “When that’s all you had, you didn’t know anything else.”
Black dolls were actually being made then. European toy companies had been selling them since the 1800s, and American manufacturers added black dolls to their lines in the early 1900s. But they still didn’t look like the children for whom they were made, because they were typically just the mass-produced dolls with caucasian features dipped in darker paint.
“They didn’t look black,” Harrington said.
At the time, many black people couldn’t afford to buy their children dolls, explained Gayle Hanson, a collector of antique dolls and member of the Rowan Doll Society.
“There weren’t as many customers,” for toy makers’ black dolls, she said, “so they made what they sold the most of.”
Hanson is also curator for the Spencer Doll and Toy Museum, and she assembled a collection of black dolls the museum is exhibiting for Black History Month.
Dolls in the exhibit range from more than a century old to recently crafted and include figures made from materials including cloth, wood, plastic and vinyl.
The display includes dolls made in the United States, the Caribbean, Japan and Europe.
And the collection includes mass-produced dolls and at least one that might have been made by a parent who wanted her child to have a doll that reflected her culture.
Raemi Evans, who is 74 years old, remembers a time when that happened.
“There were some parents that refused to get white dolls for their families, and some people even made dolls,” she said. “That was another way to give them something rather than to buy the white.”
Evans recalled that when she was a little girl, black dolls were hard to find, and some “were not typical of what you would want your dolls to look like … almost like caracitures.”
It was during the civil rights movement that black people really began to demand more accuracy in the dolls that represented them, Harrington recalled. Even then, they got small concessions.
Barbie, introduced by Mattel in 1959, had become hugely popular and had many friends, but all of them were white. In 1967, the company introduced a black version of Barbie’s friend Francie, but it was made using the same mold as the white version. The next year, the company introduced Christy, a black doll.
The Doll and Toy Museum has several black dolls from the Barbie line included in its exhibit.
Over the decades, the features of black dolls have become reflective of the people they represent, and Evans called it “ a relief to see the improvements.”
“I think a lot has been done,” Harrington said.
Also among the dolls on display at the museum is one made in the image of Harriet Tubman, who was born a slave but escaped and helped free dozens of other slaves, becoming a well-known abolitionist and later a champion for women’s suffrage.
Tours visitors take at the Doll and Toy Museum will lead them to the Tubman doll and the information about her life that accompanies it. Hanson said that’s the point of the entire exhibit, “to honor Black History Month.”
The museum strives, she said, “to honor the heritage of all people, and this particular month to honor the African-American nationalities.”
As for the woman who as a little girl couldn’t play with dolls that looked like her, Harrington hopes visitors see in the display more than an assemblage of toys or collectibles.
“I hope they learn the heritage of black people,” she said.
The Spencer Doll and Toy Museum, 108 E. Fourth St., is open 10 a.m.-4 p.m. Thursday-Saturday. The museum will also host an African-American fashion show from 3 p.m. to 5 p.m. on Feb. 28. Call 704-762-9359 or log on to www.spencerdollandtoymuseum.com for more information.
You Might Like

The resolution: Brent and Norma keep rolling along

By David Freeze For the Salisbury Post This is the fifth in a series of columns that will follow Brent... read more