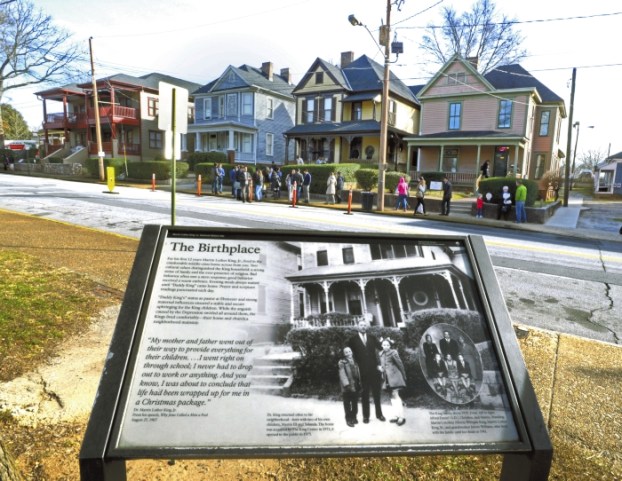 Dr. King's birthplace on Auburn Avenue is the 2nd house from the right in the Martin Luther King, Jr. National Historic Site in Atlanta, Georgia. photo by Wayne Hinshaw, for the Salisbury Post

Wayne Hinshaw: MLK and the importance of remembering

Having covered three different Martin Luther King Jr. birthday celebration events in the past few weeks,  I noted that all quoted from King’s “I Have a Dream” speech given in Washington, D.C., in from of the Lincoln Memorial in 1963.  It is a remarkable speech summing up the civil rights movement at the time it was delivered and the 100 years leading up to 1963.  King’s dream was a look to the future for everyone, but a goal especially for African-Americans.

There was a disturbing trend that ran through all of these local MLK events. A trend that was talked about at the Humanitarian Awards ceremony at Mount Zion Missionary Baptist Church.  A trend that was visible  at the MLK Parade, and a trend that I discussed with East Spencer Mayor Barbara Mallett at the “Kids for King” event. Where were the young people? Where were the 20- and 30-year-old African-Americans?

Where were the young people? Do they not remember what they have been told of the struggle? Have their lives changed so much that they don’t feel connected to the struggle? Do they think that King’s dream has been completely fulfilled?

Now, you can say here is a white man talking about the civil rights struggle. What can he know? It didn’t effect him. In many ways you are correct in doubting that I have anything to add to the debate. From my white perspective, I didn’t live the struggle. I didn’t face the dangers. I didn’t share the humiliation and injustices that came with being black.

But from my white perspective, I do remember what I saw. I do remember not understanding what was happening around me as a youngster.

I do remember hearing that my dad was born at home, with a black midwife and friend to my grandmother making the delivery. He spoke often of Granny Womble, who brought him into this world. He talked of her bragging about his “perfect belly button” that she fixed for him. He talked about playing as a child with Granny Womble’s grandson, a neighbor. My granddad built the family home on the edge of the black community in Randleman on Stout Street. I use the term “black community,” replacing the words that were actually used. I mention the factual words not to offensive, but to be real. It was called “N—town.”

I remember the local restaurant, “Circle Inn,” having a sign on the door that read, “Whites Only, Colored served at the back door.”

I remember seeing black men stand outside at the back door waiting for their food order.

I remember being in the Sears store in Greensboro and going over to the water fountain for a drink. The sign there read, “Colored Only.”

Before I could get a drink of water, I was pulled away and told that water was “nasty.” It looked OK to me. I didn’t understand.

I remember riding the school bus to Randleman High. Our driver was a white high school student. Every morning our bus would meet another bus loaded with black students also driven by a black high school student. The two bus drivers always waved at each other with big smiles. The other bus had to pass within a couple of miles of my high school as it traveled  some 10 miles to the black Central High in Asheboro.

I remember going to a Klan rally months after graduating from high school to see what it was like. I remember Klan chaplain George Dorsett standing on the back of a flatbed truck dressed in his black robe and pointed hat with his hands on the top of the heads of a young white boy and girl as his mouth flooded the air with words of hatred toward Martin Luther King, all blacks and Jews.

I remember the first black students admitted to Catawba College while I was a student. There were two males and one female student that first year. The two men were athletes. Ike Hill, an outstanding football player, became good friends with my roommate, Mike Cady, and me. Not having a car, Ike would ride with Mike and me when we went on late night food runs to Al’s Nighthawk. I never thought about it at the time, but maybe it wasn’t safe for Ike to go with us .

I remember taking Ike home to Randleman with me one evening for dinner.

I remember that I did a terrible thing to my friend. I was joking, but I know now that it was no joke to Ike. I told him that he would have to slide down in the car seat so the Klan wouldn’t see him when we entered the county. I have greatly regretted telling him that for all these years.

I remember Ike invited me to dinner at his home in Winston-Salem as we traveled to a basketball game together. He could have repaid me for my terrible joke about the Klan by telling me the Black Panthers would get me in Winston Salem, but he was much more of a gentleman than I.

I remember that after college, I had a job photographing school children in the schools in rural southeastern Virginia. The schools had just integrated in 1968, but the white kids were pulled out of public schools by their parents, who created private all-white academies. The public schools where I did photos were 99 percent black. There were a few white kids who were too poor to flee to the academies.

I remember going into the city of Norfolk looking for one of the black city schools. The street signs had all been removed, or perhaps they were never there. The street was littered with broken bottles and trash. The school was an old two story building with an 8-foot chain link fence around it to protect if from vandals.

Young African-Americans, please take time to know your families’ history. Ask questions about the civil rights struggle that your parents and grandparents endured. They endured the pain and suffering of the struggle trying to live for the “Dream” that Martin Luther King preached about on that windy day in Washington in 1963. Those adults over 70 years of age did their part to give you the opportunities that you have today. Don’t let them down and make their work fruitless by abandoning the dream.

Inspirational teachers, then and now

By Dr. Ron Turbyfill For the Salisbury Post West Rowan lost a legendary teacher this week in Margaret Stoessel. I... read more