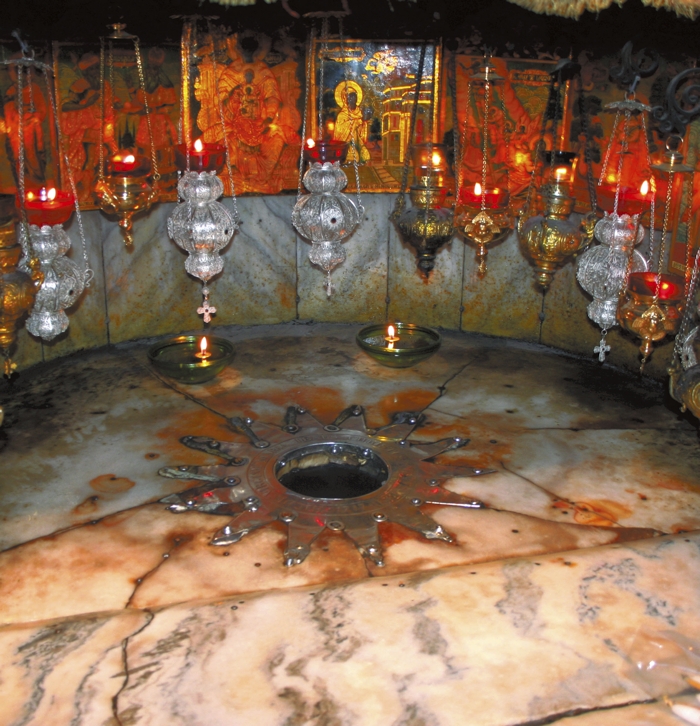 In the Church of the Nativity, this is the spot commemorating the birth of Jesus. Susan Shinn, for the Salisbury Post.

Editor’s note: This is the fifth in a series by freelance writer Susan Shinn on her recent journey to the Holy Land with a group from the North Carolina Lutheran Synod. Part six will appear in Saturday’s Faith section.

“When the angels had left them and gone into heaven, the shepherds said to one another, ‘Let us go now to Bethlehem and see this thing that has taken place, which the Lord has made known to us.’”

In extensive instructions Dr. Luker sent us before the trip, he warned us, “Dr. Luker’s pet peeve is the unprepared student who says, ‘Now where are we going today?’ ”

I had to laugh, though, because since the snow started chasing us on Wednesday, our schedule had gone all hinky. It was fine, though, because Dr. Luker worked diligently to get everything in he wanted us to see — just in a bit different order from the original itinerary.

“No matter what I see,” Ken Glace said later, “it’s something that I haven’t seen, and I’m grateful.”

Indeed, the whole group was so flexible and uncomplaining, and up for any adventure.

Today, we made a stop at a place called Pater Noster, where ceramic tiles bear the Lord’s Prayer in many languages. An interesting and contemplative place, which reminded me of the day of Pentecost detailed in Acts 2:4, “All of them were filled with the Holy Spirit and began to speak in other languages, as the Spirit gave them ability.”

We also circled back to the Church of St. Peter in Gallicantu, where Peter wept after denying Jesus. Our seminarians were especially excited to buy stoles here handmade by Catholic nuns. It had been closed the day we were due to visit because of the threatening weather.

It was there that seminarian Adam Carnell read scripture from St. Luke: “At that moment, while he was still speaking, the cock crowed. The Lord turned and looked at Peter. Then Peter remembered the word of the Lord, how he had said to him, ‘Before the cock crows today, you will deny me three times.’ And we went out and wept bitterly.’”

We also visited Bethpage, where Jesus prepared to make his Triumphant Entry through the Golden Gate of Jerusalem. It was here that seminarian Kyle Bates also read from scripture, again from St. Luke: “Some of the teachers in the crowd said to him, ‘Teacher, order your disciples to stop.’ He answered, ‘I tell you, if these were silent, the stones would shout out.’ ”

From there, we had a fascinating tour of the Israeli Museum, where there is a large outdoor model of Jerusalem in the time of Jesus. Dr. Luker took care to point out various parts of the city where Jesus had been. We also visited the Shrine of the Book, where facsimiles of the Dead Sea scrolls are housed. Dr. Luker also showed us various antiquities housed in the museum to help us better understand the sites we had seen.

We ended the day at a shop near Bethlehem, which sold beautiful olivewood carvings. This was a shopping crowd, let me tell you what. Truth to tell, we stayed a bit too long, because when I went to the bus, I saw the gates of Shepherd’s Field just across the street were closed (an hour before the posted closing time). I immediately alerted Dr. Luker, who called a friend and asked him to reopen the gates.

The caretaker must not have gotten the memo however, because he appeared almost instantly to run us out. Whatever problems he was having were beyond the scope of our tour group. We sang a quick chorus of “Angels We Have Heard On High” before allowing ourselves to be shepherded none too gently to the gate.

The next morning during devotions, Dr. Luker urged us to “be the shepherds.” Shepherds are the folks, he said, who break the rules, who think creatively, who represent rebellion. Yeah, it’s good to be the shepherds, we decided.

That night, we sat around the table at vespers and sang “O Little Town of Bethlehem” while the snow fell outside.

The snow that had fallen in Jerusalem after our departure from The Holy City had caught up with us. We had a weather delay that morning. Elvis, our beloved bus driver, couldn’t get to us, as the checkpoints were closed because of the weather. We had no choice but to hole up in the hotel and wait for the streets to clear.

Adam read our devotions that morning up in the meeting room, instead of on the bus.

That’s what will happen if we don’t share the Good News, he said.

We had awhile to talk and share. Dr. Luker told us the reason we were still seeing Christmas trees everywhere we went. In the Holy Land, trees go up around the time of Western Christmas, Dec. 24. Orthodox Christmas is Jan. 6 (also Epiphany) and Armenian Christmas is Jan. 20.

We talked about the dreadful weather we’d faced the day we visited the church of the Holy Sepulchre.

“We had wind, rain, sleet and snow,” Pastor Charlene Limenih said. “But don’t complain. Jesus was born in winter. Can you imagine Mary being 9 months pregnant in this weather? Don’t complain. Just give thanks.”

We talked about recent holy moments.

“I never dreamed I’d be sitting around a table singing ‘O Little Town of Bethlehem with Christmas still being celebrated,” said Pastor Jon Heiliger. “It was a beautiful moment.”

We talked about the value of Sabbath.

“When the streets were empty because of the Sabbath, that was the first time I was really seeing it,” said seminarian Jesse Canniff-Kuhn. “There was a real beauty in knowing that emptiness correlated with pockets of families being together throughout the city and country. I was filled with awe and envy. As a culture, we can never adopt that in the States.”

Pastor Gary Mitchell pointed out, “We do not have the lives our parents had. People don’t work 9-5. Sometimes, Sundays are the only days they have. People are trying to survive the best way they can.”

“God does not define your work by what you produce,” Dr. Luker said. “One-seventh of your life should be spent in rest and renewal, in not doing but being.”

A few moments later, Elvis arrived and our own short time of Sabbath ended. We traveled to the Church of the Nativity, where once again, I ducked through the exit to meet my group in front of the very spot in the cave where Jesus was born. We sang “Silent Night,” and a Palestinian family beside us said, “Pray for peace.

We drove down to Jericho for lunch at the lowest and oldest city on earth. We had lunch at a place called Temptation Restaurant, where men smoking hookahs in the dining room added to the authenticity of the experience. Elvis pulled warmed pitas from a small coal pit near our table for us.

I bought dried dates for my parents at a nearby gift shop, while others in the group purchased the gorgeous hand-blown vases and glasses for which the area is known. I had a long conversation with one of the shopkeepers, a Palestinian Muslim, about peace.

“Come with me, I want to give you something,” he said. Sorting through a small box, he placed a simple carved ring on my finger. To help me remember to pray for peace, he said.

For fishing gear, ‘Go to the candy store’