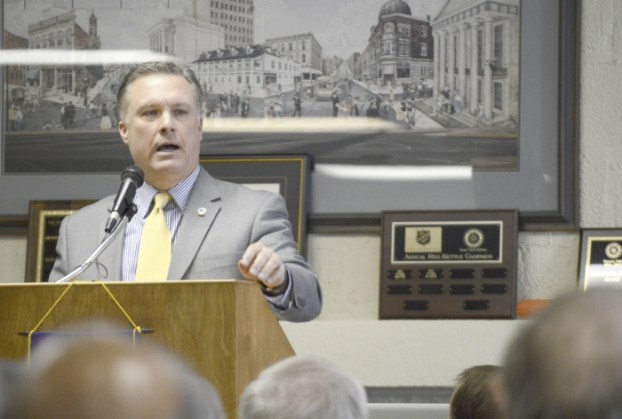 Rowan County needs to think differently when it comes to economic development, said board of commissioners chairman Greg Edds in a Tuesday speech to the Salisbury Rotary Club.

The speech largely echoed talking points during Edds’ campaign for county commissioner. He talked about economic areas Rowan County could focus on and a series of committees planned, such as ones addressing rural internet access, Interstate 85 strategic planning and county-wide rebranding.

“What’s going to be next,” Edds asked the audience. “We’ve got to just begin to think differently.”

“Anyone from Davidson County here,” Edds joked. “Good, because they’ve got nothing going on … This is not a call for tax increases. This is a call for us to look at what we aren’t doing right.”

Edds said the missing piece of economic success for Rowan County was figuring out the best way to recruit industry.

“We could line up 100 people to talk about the needs in Rowan County, but until we figure out how to pay for it we’ve got a real challenge,” he said.

Edds said the old method of industry recruiting or shotgun recruiting — “throwing out a net and seeing what comes back” — doesn’t work.

“We don’t need more Taco Bells or dollar stores,” he said. “We need industry that can support families. In this new economy, employees can work for who they want and where they want. We have to be a community where quality of life is critical.”

The list of industries he said Rowan County is best suited for included: distribution or logistics facilities, food processing, advanced manufacturing and call and data centers. The list also included retail stores, but he said retail was listed as the lowest priority because recruitment is done by the businesses not government entities.

“The demographics have to be right,” he said. “You have to have disposable income. Once you reach that bubble, someone from an office cubbyhole in Kansas City, Mo. will have their computer beep one day and it will say Rowan County is ready.”

He said Rowan is nearing the needed bubble and solving a retail leakage problem — when local residents shop in other counties — with Dicks Sporting Goods planning to build a store in the Summit Corporate Center, but more work is needed.