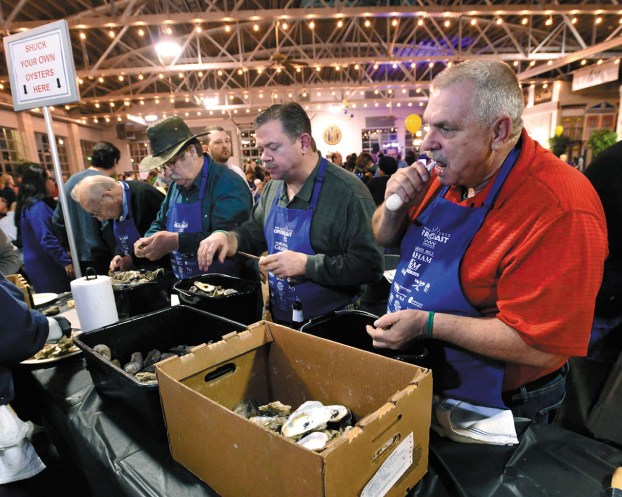 Shuckin’ the night away at annual Oyster Roast

Good food, good times, good people and a good cause all came together Saturday night for the annual Oyster Roast to raise money for the Waterworks Visual Arts Center.

The 10th annual event was held at the F&M Trolley Barn, adjacent to the Waterworks Center, on East Liberty Street downtown and was sold out. About 400 people attended the event, which featured music, dancing, plenty of food and all the oysters you could eat.

Anne Scott Clement, executive director of the Waterworks Center, said all of the money raised goes toward the center’s outreach and educational programs. She said the center is fortunate to be part of a community that supports arts and culture, and that she hopes the tradition will continue.

The roots of the Waterworks Center go back to 1959 when the Rowan Art Guild was founded. Today, the non-profit art museum serves the Salisbury and Rowan County in multiple ways.

Salisbury City Councilwoman Karen Alexander was at the Roast — she’s been to every one — and said it’s an important fundraiser.

“Waterworks is an essential part of the cultural experience in Salisbury,” she said.

Alexander previously served on the board of Waterworks and said the arts center provides important activities for at-risk children and also serves homeless people in the community.

It’s also heavily involved with the schools in the county, she said.

Mike Alexander, Greg Moore and Fred Burcham were cracking oysters by the dozens.

“It’s awesome,” Moore said about the event, “Get our fill of oysters and beer.”

The fellas from Big Daddy’s Restaurant and Oyster Bar in Mooresville were out back steaming oysters. They were expecting to go through about 70 bushels of oysters — one bushel can weigh 45 to 60 pounds and have over 100 oysters — and 100 pounds of shrimp, according to Freddie Lancaster, who runs the restaurant.

Amanda Earnhardt said she’s been to the event every year since it started and has the collection of chef’s aprons to prove it.

“It’s a good fundraiser and good food,” she said.

Hayden Simmerson was busy shuckin’ oysters for the people at his table.

“I only shuck oysters for good looking women …,” he joked.

He brings his own oyster knife and, though he hasn’t been to every Oyster Roast, he said he’s pretty much a regular.

“I like it a lot,” he said about the event. “Good people. Nice people.”

Over two dozen people have been arrested in connection to drug charges after a months-long investigation, according to a press release... read more