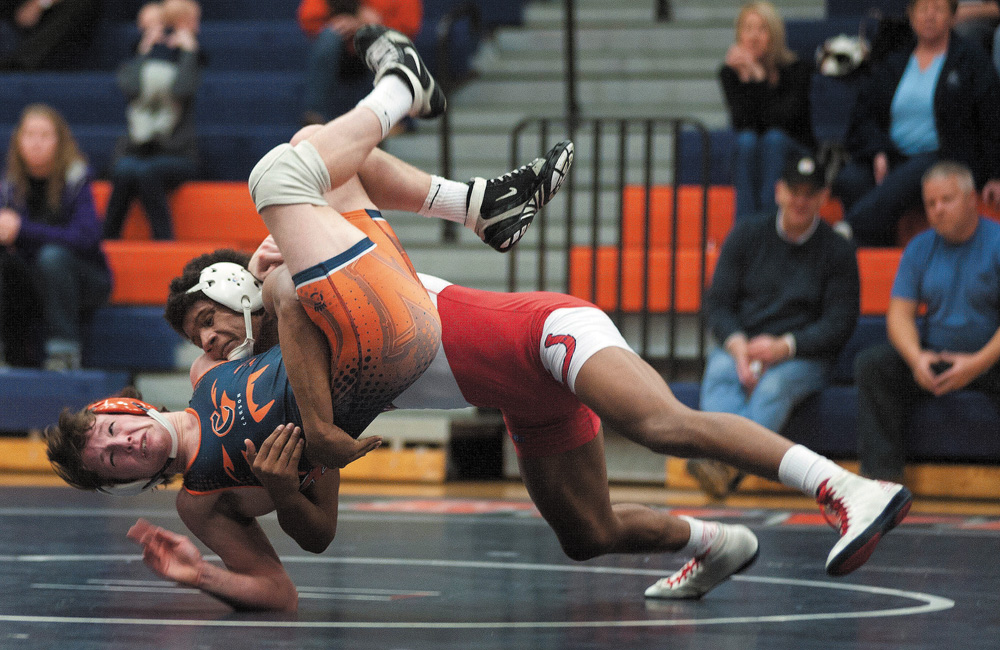 CHINA GROVE — The inside track to the South Piedmont Conference championship belongs to East Rowan. A 51-21 win at Carson on Tuesday gives the advantage to the Mustangs, who are expected to at least share the league championship for the second straight year.

“It feels good to repeat that for two years in a row,” East Rowan coach Barry Justus said.

The Mustangs (6-0 SPC) wrestle Concord on Friday and take on Hickory Ridge on Tuesday in the conference finale. Justus said Hickory Ridge can’t be overlooked because “they are very tough also.” The Ragin’ Bulls lost to the Cougars (5-1 SPC) by just two points last week.

In Tuesday’s showdown in China Grove, Justus counted seven potential matchups that could go either way.

“But we just got the momentum, and the kids wrestled very, very well tonight,” he said.

With the teams tied at 9 after the 145-pound match ended with East Rowan’s Dustin Humphrey retiring because of an injury, the Mustangs seized the momentum with three straight wins. Luke Miller defeated Bailey Rayfield in the 152-pound match with a 17-3 major decision, Max Wall defeated Isaac Hengal at 160 pounds with a 17-9 major decision, and Daniel Muncy picked up six team points for East Rowan when Jaron McMasters had to retire because of an injured right knee.

McMasters walked onto the mat with a knee brace and knee pad. He took both off after the first period. The match was stopped in the second period when Muncy, who was ahead 2-1, dropped McMasters to the mat and folded the knee over the left leg. McMasters tried to continue wrestling on it, but the match was ended before the end of the period.

“Losing the match at 152 and 160 pretty much killed our momentum going forward from there,” Carson head coach Bryce Vandenberg said.

Saunders, who has lost only once this season, normally wrestles at 182 pounds, but he gained a few pounds and was bumped up to the 195-pound weight class. He gave up 24 pounds to Carson’s Anthony McCurry. A reversal and a three-point near fall in the second period gave Saunders a 9-6 lead going into the third period. Saunders pinned McCurry with 3 seconds left on the clock.

“When you bump up a kid to the next weight class, you never know what’s going to happen, and if you saw the match he just about got caught twice,” Justus said. “The kid’s heavy, and (Saunders) probably would have gotten pinned if (McCurry) had gone over the top one second because wrestling is inches. (Saunders) ended up fighting and improved his position and kept attacking, and I think the kid wore out a little bit.”