Pet-sitter Bentley wants her ‘humans’ to have peace of mind 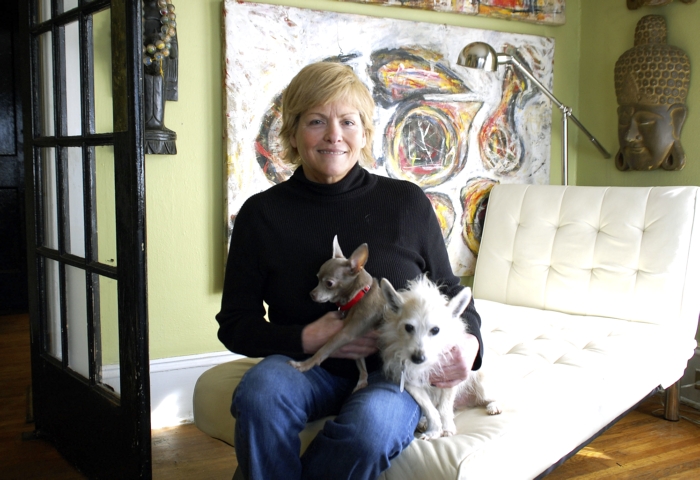 Mark Wineka/Salisbury Post At her Salisbury home, pet-sitter Libby Bentley holds two of her own dogs, Little Man and Henry.

SALISBURY — Libby Bentley did everything from flipping houses to working in a produce warehouse to helping run a fish store.

But Bentley found her niche when a friend steered her toward pet-sitting, and she calls her fairly new business Peace of Mind, because that’s what she hopes she’s offering her clients.

If they’re going to the beach, taking a vacation in the mountains, getting away for a weekend, or flying off on business overseas, Bentley wants Peace of Mind customers to have no concerns about leaving their pets behind at the most comfortable place for them — home.

“Not having to worry — that’s my big thing,” she said for her clients.

Bentley will check in on the pets several times a day. She’ll stay at the house with them, if that’s what a customer prefers. She’ll give the pets their medications and take them to grooming or veterinarian appointments. She’ll work in their walks and make sure they’re eating what they’re supposed to eat.

Bentley also has no qualms about bringing in her clients’ mail, picking up their newspapers and pulling their garbage to the curb.

She makes it a standard practice to call, text or otherwise communicate with her customers once a day, letting them know how things are going with their pets while they are away.

Most of her sitting duties are for dogs and cats.

“I meet the humans one time,” Bentley said, “and basically, I don’t see them again. I work with animals.”

Bentley laughed, realizing she called  her clients “humans.” Many of the “humans” become friends and repeat users of her service.

For now, Bentley thinks she’s the only full-time pet-sitting service in Salisbury.

“Christmas — over the holidays — I was slammed,” she said.

Bentley has always had a way with animals, especially dogs. She will not protest if you call her a dog whisperer, because she thinks it’s true. The friend who persuaded her to start a pet-sitting service told Bentley it was a no-brainer — she has the personality, loves animals and is trustworthy, the friend said.

Bentley, 53, said her middle age probably helps on the trust side. Her family, which includes husband Logan and 17-year-old daughter Arden, also has six dogs and a cat.

Bentley has been a little bit surprised that most of her customers have been singles, or couples with no children. People in that demographic — all demographics, really, Bentley said — consider their pets as members of the family. Up until now, most people have wanted her to check in on their pets two to three times a day, rather than stay at the house.

One couple in Salisbury said before they used Bentley’s Peace of Mind Services, they would return home after a vacation and the place would be a mess.

Now, when they use Peace of Mind, “the house is clean and everyone’s happy,” Ann Marie Alderman said.

The couple have two dogs, two cats and three chickens, and Bentley looks after them all.

Bentley grew up in Florida and obtained her beautician’s license after high school. The chemicals she was dealing with daily drove her out of that profession. She became a Realtor and had a successful run for several years in Georgia.

She traveled to China and adopted Arden when she was just 10 months old. Bentley started out intending to raise Arden as a single mom, but she met Logan during the time the adoption paperwork was going through. The couple married in 2001, and the family moved to Salisbury in 2003.

Besides having a way with animals, Libby Bentley also is a fairly accomplished artist, an avocation she started as a young adult. Her work has appeared in local exhibits.

Her love of animals started as a youngster, when she was always bringing home cats and dogs she had rescued. The ones allowed to stay ended up sleeping on her bed.

If there’s one drawback to pet-sitting, it’s the crimp it can put on your own vacation plans. When most families are going to the beach in the summer, for example, is when they probably want someone to look after their pets back home. Holidays are another time when people are looking for pet-sitters.

Bentley said there’s no need to worry about her. She and her family are pretty boring, and “we don’t go anywhere.”

“Look,” she added, “I was playing ‘Warcraft’ when you came over.”

People interested in contacting Bentley’s Peace of Mind pet-sitting service can reach her at 704-433-3339. She offers free consultations and other pet services such as transportation (a pet taxi) to vet appointments and groomings. Her email is libbybentley@yahoo.com. Contact Mark Wineka at 704-797-4263, or mark.wineka@salisburypost.com.