Centenarians on the rise 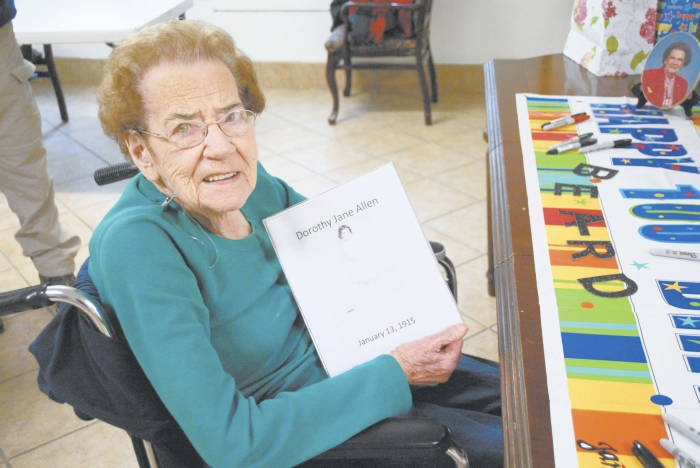 Centenarian Dorothy Beard, known to all as ‘Mama Dot,’ displays a photo of herself as a toddler at her 100th birthday party on Tuesday. For Dorothy, the truth to living a long life is loving the Lord, loving your family, working hard, and not complaining about it. Elizabeth Roy/For the Salisbury Post

More living to 100 locally, across the US

There’s a whole lot of wisdom to be gleaned from the more than 55,000 centenarians alive in the U.S. today.

Ask centenarian Dorothy Beard of Kannapolis, known to all as “Mama Dot,” and she’ll tell you that the truth to living a long life is loving the Lord, loving your family, working hard, and not complaining about it.

For Earl Cranford of Rockwell, his 101 years of life have taught him to “keep up with the Lord,” along with another vital lesson: “Be good or get a whoopin’.”

Dorothy and Earl are part of the most rapidly growing segment of the American population – those over 85 years old. And their centenarian status is one that we will be seeing more of in years to come.

People are living longer. So much so, that the National Institute of Aging estimates that there could be close to 1 million centenarians by the year 2050.

What’s the secret? Studies by the Centers for Disease Control show that a formula for long life and good health includes not smoking, healthy eating, exercise and limiting alcohol intake.

Dorothy Beard has a few more secrets to add to the list.

Born on a farm in Danielsville, Ga., where she began picking cotton at age 5, Dorothy learned that with hard work anything is possible.

“I wanted to go to the cotton fields,” Dorothy said of her early farm days. Sometimes one of her three siblings would complain about the backbreaking labor, she says. “But I just kept right on picking.”

In 1915, when Dorothy was just 6 months old, she lost her mother to the flu. In the years to come, Dorothy was in and out of school to help support her family and raise her younger stepsister. She stopped attending school altogether in the seventh grade.

Dorothy’s family of sharecroppers moved to Kannapolis in 1929 for textile jobs at the Cannon Mills Co. Once married, Dorothy had to pick her family up and move them more than once for her husband’s World War II military service and other jobs.

One secret to Dorothy’s longevity is her adaptability, her son, Bill Beard, says of her.

A talented seamstress, a gifted cook renowned for her pecan pies and mac n’ cheese, and an industrious worker, Dorothy always pieced the funds together to support the ambitions of her three children.

A shining example of this occurred when Dorothy’s husband instructed their eldest daughter, Brenda, to work as a secretary until she raised enough money to pay for her younger brother’s college education. But when Brenda came home one day and told her mother she’d like to attend college too, Dorothy replied, “Well if you want to go, we’ll find a way,” Brenda recalls.

“She was my very first feminist role model,” said Brenda Bostian of her mother.

Yet another secret to Dorothy’s lasting happiness, her family shares, was her daily routine – grits and sausage biscuits for breakfast each day and a cup of coffee with every meal.

“And that routine sustained her long life,” said daughter-in-law Caroline Beard. “Even in her recent years, she was still outside doing yard work.”

Not only did Dorothy live at home without any assistance until she broke her femur at 98 years old, but she even passed her driver’s license renewal test at 98 years. Throughout her 90s, Dorothy drove her peers to Centerview Baptist Church in Kannapolis, where she had served as a Sunday school teacher for 42 years.

When Dorothy’s children expressed their safety concerns about her putting around town on her Sunday transport runs, Dorothy simply explained, “It’s my mission.”

In addition to the valuable lessons they share, our local centenarians have vivid connections to Rowan County’s past.

Both Earl and Dorothy’s families have ties to the Cannon Mills Co. of Kannapolis. Earl, his father, and his grandfather all worked at the mill at some point in their lives, as did Dorothy, her father, and her husband, William Tillman Beard Sr.

A Rockwell native who still lives there today, Earl views the streets of his boyhood every time he looks out the windows of his Rockwell retirement community. He was raised on Tuff Street, now known as Cannon Street.

Earl, like Dorothy, has his routine: Wake up early, read the sports page, and socialize with friends.

At his facility, Earl is the big man on campus. “I’m the oldest one around here,” he said.

Talking with Earl and Dorothy, or should we say “Mama Dot,” the final secret to their longevity is quickly recognizable: laughter.

The oldest person in the Bible lived to be 120 years old, Dorothy says – and she plans to pass that up by a conservative three years, by living to 123.

“She has an incredible sense of humor,” said Brenda of her mother. “The woman has wit.” Earl Cranford, a lifelong Rockwell resident, is 101 years old and one of the more than 55,000 centenarians alive today across the country.
Elizabeth Roy/For the Salisbury Post