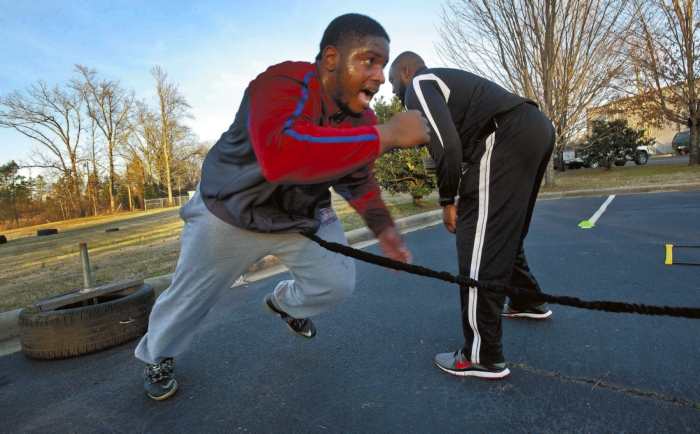 JON C. LAKEY / SALISBURY POST Javon Hargrave, a former North Rowan football star and current FCS All-American for South Carolina State, has been taking his semester break to work out with Antoine Nelson at the Forum..

SALISBURY — North Rowan graduate Javon Hargrave has been transformed from a guy with NFL dreams to a guy with realistic NFL possibilities.

The South Carolina State  junior did a lot to raise his stock on Oct. 25 when his team won, 20-14, against Bethune-Cookman, the 13th-ranked team in the FCS poll. Hargrave, a 6-foot-2, 310-pound defensive tackle, made 11 tackles in that physical struggle between bitter Mid-Eastern Athletic Conference rivals. Six of his tackles were sacks.

Seriously — six sacks. Hargrave made sacks when he was lined up inside and he made sacks from the outside. He broke the school single-game record and tied the MEAC and FCS records. He was the national player of the week.

“That one  game changed my life — it really did,” Hargrave said.  “Since that game, lots of scouts have come around to watch me.  That game was the spark for a lot of good things that have happened to me.”

It’s hard to believe but Hargrave’s physical status was doubtful going into the Bethune-Cookman game.

“I had a minor knee thing, so I didn’t  even start the game, and that’s what made it really crazy,” Hargrave said. “I had no idea I had six sacks. I was just trying to win, and I lost count. I didn’t realize it until they started asking questions  in the press conference.”

That game was the centerpiece of a tremendous season for Hargrave. He had 55 tackles, 24 tackles for loss and 16 sacks. He ranked fourth nationally in sacks. Accolades piled up. He was named MEAC Defensive Player of the Year and he was honored as Boxtorow.com’s national  defensive player of the year for all historically black colleges and universities. He was a finalist for the Buck Buchanan Award that goes to the top defensive player among all FCS schools.

Then Hargrave was named to the first team on a long parade of FCS All-America squads, including the team issued by The Associated Press.

So what’s next for Hargrave? Well, resting on his laurels isn’t an option for No. 97.

He’s lifting weights daily during his holiday break with trainer Kendall Hardin and he also puts in several days a week with speed and agility specialist Antoine Nelson, a personal trainer employed by The Forum, a Salisbury fitness center.

A former A.L. Brown linebacker and assistant coach with the Wonders, Nelson uses low-tech, high-intensity training methods. A lot of what Nelson does he learned from his mentor — A.L. Brown’s strength and conditioning guru Todd Hagler.

Hargrave hopped, bounced and performed drills straight-on and sideways until he was drenched with sweat on a chilly day.

Hargrave zigged and zagged nimbly around simple cones like a man 150 pounds lighter.  Then, hooked to a harness, Hargrave  dragged a tire and chased workout mate Adam Drye, a Salisbury freshman, across a parking lot.

Drye works out with Nelson to improve his stamina for swimming as well as his footwork for tennis and soccer.

Hargrave finished his ordeal by racing up and down a flight of stairs several times before cooling down with stretching exercises.

“This is the hardest I’ve ever worked on my break,” said Hargrave, managing a small smile.

Hargrave made the FCS All-Freshman team in 2012, but he battled injuries in 2013 and posted only 5.5 sacks. Going into his junior year, he was only second team on the All-MEAC preseason team, so he had a lot to prove and the motivation to prove it.

At North Rowan, Hargrave was a four-year varsity standout and set a Rowan County record for career fumble recoveries with 18. He capped his prep career with 2.5 sacks and a fumble recovery to earn defensive MVP honors in the East-West All-Star Game played in the summer of 2011.

Hargrave wasn’t eligible to play right away at S.C. State and sat out the fall of 2011, but he’s made strides academically. The communications major  is now on the Dean’s List.

Hargrave was determined not to take a step back during the weeks between college semesters.

“Javon’s dad knows the people at the Forum and he wanted to get him some extra work,” Nelson said. “These workouts are the best gift Javon got for Christmas. When Javon first walked in here, I was upstairs looking down at him and he really didn’t look all that big. But then when you get up close to him, you can see that this is a grown man. And he’s a big man who can really move. He’s got a chance to play at a very high level.”

“He loves it, and you can you look at all that sweat and you can tell that it’s working for him,” Nelson said. “I enjoy it too. Being a personal trainer is the closest thing to being a coach. Coach Ron (Massey) used to tell me that the greatest thing anyone can call you is Coach. I like it when people call me Coach.”

Hargrave calls Nelson “Coach,” and Nelson is doing what he can to keep Hargrave on track. Hargrave will return to South Carolina State in better shape than when he came home for Christmas. That will be the first time that’s ever happened.

Hargrave briefly considered declaring for the 2015 draft, but he’s wisely decided to prepare for his senior season. He currently is ranked 32nd among the defensive tackles available for the 2016 draft.

“I kind of snuck up on some people and had an amazing season, but I know my senior year will be tougher,” Hargrave said. “Teams will be ready for me and game-planning for me. That  just means I’ve got to work hard to be successful.”

Even on his Christmas break.