Deal Safrit and Sheila Brownlow: The best books of 2014 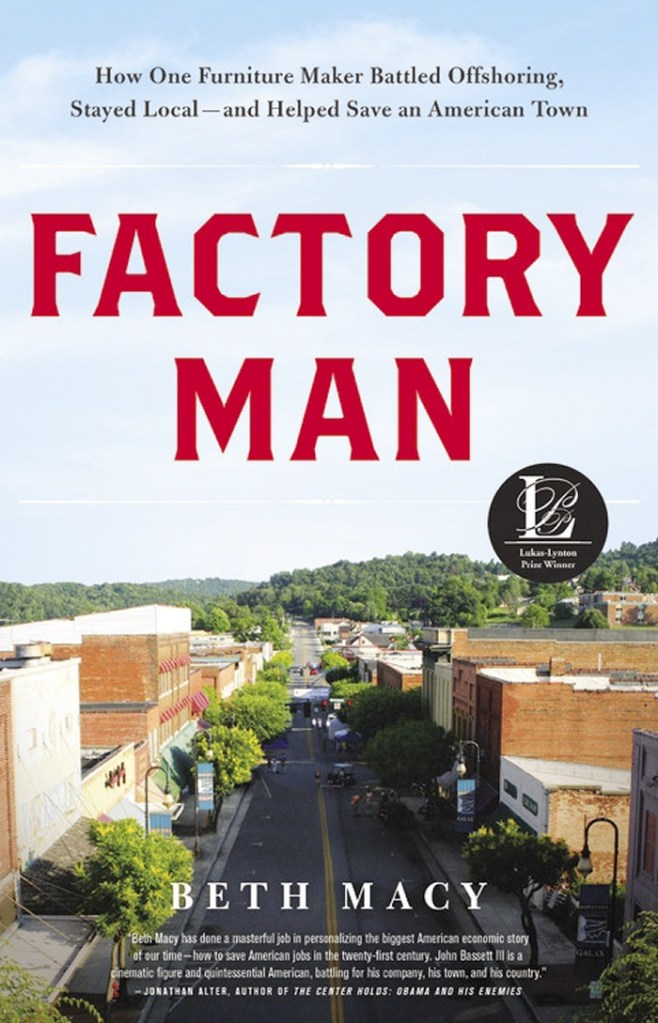 Here it is, the last day of 2014, and, due to deadlines at the Salisbury Post and my own propensity to postpone things, especially computer things, until the last minute, I find myself faced with writing the very biased Best Books of 2014 as seen and read by me, Deal Safrit, and my wife, Sheila Brownlow.

When first approached about this article earlier in the month, my first inclination was to decline for the first time in a number of years, but then I quickly reconsidered and accepted the challenge.

We, Sheila and I, face a number of challenges in doing this article, not the least of which is that there are but two of us and in any given year there are hundreds of thousands of new books, although that number is reduced considerably when all of the self-published tracts are pushed aside.

Still, there are obviously far too many books for two people to have read, or even heard of, to say that this is the way it was in the past year. All we can do is look at the couple of hundred books we have read and build from there with our very personal opinions.

Before getting into specific titles, I will say that, to me at least, 2014 was a year of some pretty good books, but almost none that could be considered memorable. I know some years, as the books are read, I will say to myself that this or that book will be in the top 10 at year end unless something better comes along. This year, at the end of November, I was thinking we likely wouldn’t have a top 10 at all; we would just come as close to that number as we could, combining fiction and nonfiction.  That is how, now on the last day of the year, things have ended up in our book world, at least.  Let’s look at the details.

Non-fiction, at least on my side of the equation, was really sad this year, though I must accept part of the blame because so very much of what I read in this multitude of genres was older books.  One book, though, stood out above all the rest, and may be the best book across all categories that I consumed in the past 12 months. “Factory Man” by Beth Macy, the story of John Bassett III and his struggle to keep furniture manufacturing within the borders of the continental United States, literally took over my thoughts and life for the time I read it and for days after.  In a nutshell, the legendary Bassett Furniture Co., founded by John Bassett, went to China; John Bassett III went away from that namesake company and he, along with others, became Vaughn-Bassett Furniture, and they stayed in the USA. Today, after years of struggle, JBIII and Vaughn-Bassett are the largest manufacturer of wood furniture in the US with their several factories in Galax and Elkin.

Macy’s narrative could just as easily have been written about the textile industry, more local to us here in Rowan County, but we had our furniture as well. This is the one nonfiction book of 2014 that should not be missed; my full review of “Factory Man” is available on both the Salisbury Post and Literary Outpost websites.

Even Sheila had a tough time with the nonfiction in 2014, and she not only reads a greater quantity than I do, but also her interests stretch across a larger number of genres. But, scratching her head (I made that up), she added several titles for the year.

What’s up with the cupcake craze? Greek yogurt? Why is bacon the be-all and end-all of foods? David Sax considers more than taste in “Tastemakers,” detailing the growth (and demise) of various food trends in America. He describes how agriculture, pop culture, famous chefs, and health trends all come together to tell Americans what we want to eat, how we should feel when we eat, and what we will be eating in the future (next up: Indian food). Sax has a good command of science, economics, and health, which he mixes with market data and personal observation, to show how we become hooked on certain random foods ― how else could kale become the in-veg? And who knew that one 20-second scene in “Sex and the City” ― one featuring a cupcake held but not eaten ― could create a mini-cake mega-trend?

Even a non-sports lover can read the joy and pure love of games, writing, and sports seen in “Scribe,” by Bob Ryan. Ryan’s memoir is an ode to growing up in the 1950s, finding a talent in writing, and living a life guided by deadlines and locker rooms. Ryan’s adventures as Boston Globe scribe for all sorts of sports puts the reader in the middle of time, culture and place; and he makes connections among the players and coaches, changing times and mores, and love for a great city. Ryan’s prose makes sports-lovers out of the most sports-apathetic persons, as anyone can appreciate sharp writing about a deeply-felt subject.

On to fiction, and here I will toss five books into the pile, though unlike in previous years I am not going to rank them; you are welcome to read all of them and I don’t think you will be disappointed. Toward the end of the year I read two books with a title word derived from “paint” in the title. “Painted Horses,” a debut novel by Malcolm Brooks, is set in 1950s Montana where a young, female archeologist, Catherine Lemay, under the auspices of the Smithsonian River Basin Survey, has come to a valley to survey it for historical significance prior to the building of a dam which will flood the terrain forever. In my recent review on Literary Outpost, I say “Brooks shows his readers the beauty of the geography, the wonder of the past, and the pathos of some human beings as they hunt and strive for an end they aren’t even certain of.” As is true of so many authors and there debut novels, Brooks is able to rise above the norm because he is writing the book he wants to write; it is only later, when he will be writing additional novels, that readers often see a change and an author begins writing what is expected of him.  Malcolm Brooks is a carpenter, but he is a true writer as well.

The second novel derived from the word paint is “The Painter” by Peter Heller, his first novel since his award winning The Dog Stars, and a book that I am currently writing a review of. This is a novel of a painter, one Jim Stegner, a fly fisherman, one Jim Stegner, and a murderer, one Jim Stegner, among other things. With a setting mostly in Colorado, the novel is somewhat predictable because you can guess what our protagonist is getting ready to step in, but unpredictable in that you often can’t see who is going to reach in and pull him out. In the end, you can’t help wondering if all of us are bad guys, or just good guys in disguise.

“Fourth of July Creek” by Smith Henderson was an unexpected surprise, a book that neither Sheila nor I thought we would read but then both did and completely enjoyed. Set in Montana, an area which seems to be a coming trend for many of the books, and authors, I read lately, social worker Pete Snow and evangelical survivalist Jeremiah Pearl dominate this wilderness story that ultimately will involve many other individuals along with agencies including the FBI. At times stark, violent, and haunting, this debut novel will stick with the reader long after the last page is read.  Next, we move to a somewhat similar tale which, though we both read it, Sheila is going to take the lead.

“Descent,” by Tim Johnston, was recommended to me by Summer Reading Challenge veteran Forrest Anderson. Now I’ll read anything by Tim Johnson. The book details the unraveling of a family after one of its members, their 18-year old full-of-promise daughter, goes missing on a family vacation in the mountains. No brother, parent, marriage or even townsperson nearby fails to be unaffected in a profound way by the inability of law or love to locate Caitlin. The novel shifts from the slow, thoughtful description of those left behind to a thrilling story of survival, and the pace accelerates with something unexpected on nearly every page; the final third of the book is a complete thrill. Johnson’s gift of storytelling is matched by his unbelievable descriptions of physical place and space.

Now, to prove that I am not stuck exclusively on the other side of the Mississippi River, I absolutely must include the fine story collection of South Carolina writer George Singleton, one of the very few authors for whom I anticipate new books with childish glee. “Between Wrecks” includes 14 stories, with the 14th being novella length and a truly hilarious putdown of the way many contemporary authors have long passed the limit between sense and nonsense when acknowledging the help of those who have contributed to the outcome of their book in some way. Enjoy the 13 shorter stories, and then try to read “I Would Be Remiss” without disturbing your partner, friends or neighbors. Please also note that Singleton will be one of the participating authors at Rowan Reading Rendezvous at Rowan Public Library on Saturday, March 21.

For another fiction pick, Sheila adds a book that has been on my list of books to read for a while. “Thirty Girls,” Susan Minot’s fictionalized account of Ugandan girls kidnapped by Joseph Kony’s Lord’s Resistance Army, is told in part through Esther, one of Kony’s kidnapped girls. Her story of families who let the girls go, physical and psychological torture, and knowing the world cares little for the plight of young Africans is difficult to read at times. Esther’s story alternates with that of Jane, a feckless and unlikable American writer who has escaped to Africa to lick her wounds from a failed marriage, find new love, and live life as though there is nothing worth living for. Minot deftly weaves Esther’s heartbreaking tale into Jane’s self-serving one, but it is Jane who is the only one who ultimately tells the world about the 30 girls. In Minot’s skillful hands, I was unnerved by loving Jane’s actions while cultivating an abiding dislike for Jane herself.

My final fiction work is the new novel from Brock Clarke, “The Happiest People in the World.” Okay, most of us will acknowledge that Clarke writes somewhat strange novels which often go off in directions that the reader does not expect. With scenery shifting between upstate New York and Scandinavia, with shifting allegiances and loyalties, political and cultural satire rarely arrives at the point which Clarke capably takes it in all of his novels, and he continues his superb job here. There are suspects, and the reader suspects the suspects, but, whatever is going to happen both on the next page, and at the end of the book, the reader knows that “everything is going to be just fine.” Or at least it will be through the eyes of the moose on the wall.

Enjoy your reading in 2015, as I am certain we will, and we will probably tell you all about it in 12 months.

Doug Creamer: A New Beginning for 2015