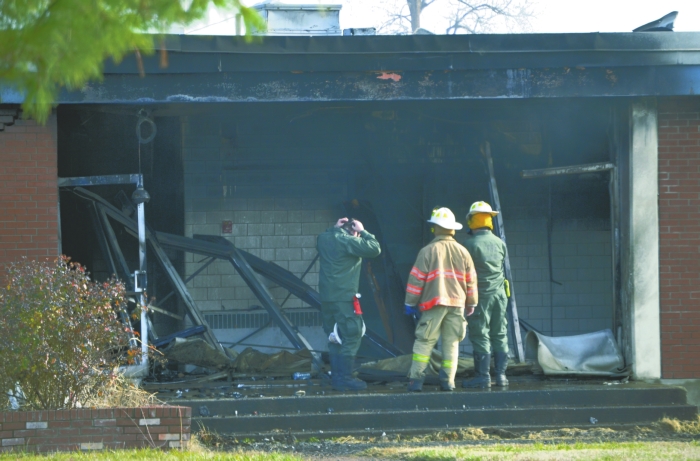 EAST SPENCER — No official cause has been determined in the Tuesday night fire that gutted the historic Dunbar Center on South Long Street, but investigators say it could’ve been set intentionally.

A fire completely destroyed the building, which at one point housed an all-black school. The fire began sometime before 8 p.m. Tuesday, and fire crews continued to douse the building with water well after midnight.

Wednesday morning, Fire Investigator Deborah Horne said authorities were just starting their investigation. Horne said fire crews were continuing to put out hot spots inside the building, which was built in 1958 and operated as Dunbar High School.

Horne, who is with the Rowan County Fire Marshal’s Office, did not say the fire was the result of arson, but indicated it could’ve been set by someone trying to keep warm.

Right now fire officials are looking at every avenue to determine a cause, she said.

Horne said they called in other agencies to assist because the fire was more than any single department could handle. The East Spencer Fire Department, the Bureau of Alcohol, Tobacco, Firearms and Explosives (ATF), and the Davidson County Fire Marshal’s Office responded. The SBI was at the scene for much of Wednesday.

Horne said they had not been able to get inside to determine if were accelerants were used.

Fire crews had to shuttle water from two hydrants — one near Bojangles’ in Spencer and South Long Street. Horne said firefighters used 250,000 gallons of water to extinguish the fire.

The initial fire call came in as a first alarm with five stations responding and then was upgraded to a five-alarm fire when fire officials used their tanker task force to access water from area hydrants.

East Spencer native Essie Mae Foxx said she was devastated to hear news of the fire. Foxx, who lives on Long Street, said she saw several fire trucks headed to the site.

“I couldn’t believe it. I’ve never seen so many (fire trucks),” she said.

Foxx was instrumental in organizing the annual Dunbar School reunions.

Former students would gather at the center every other year for a mass reunion that included a picnic, parade and dance.

The school operated from 1929 to 1969, before integration led to its closing.

Long before Foxx began organizing the reunions, she was a part of the school because she, and later her children, attended.

Her children heard about the fire Tuesday night and asked her if she wanted to drive to the site to watch with other onlookers.

“I didn’t want to see it burning down, all of our dreams and hopes up in smoke,” Foxx said.

Foxx said she just cried at the thought of so much history going up in flames.

When Foxx declared to her family the Dunbar Center will never exist again, her grandson told her simply they should rebuild.

The youngster told his grandmother, “It could happen.”

It did happen once before. The school burned in March 1938. Until another school was erected, students met at Southern City AME Zion Church and Shady Grove Baptist Church. The current building was dedicated in 1958.

Foxx’s daughter, Jackie Hillian, recalled going to the school until 1968 when she elected to attend North Rowan Middle.

She and several students had to walk 3 miles to catch the bus at what is now the Rowan-Salisbury School System administration building on South Long Street.

“We had teachers who were like your parents. It was a community thing. Everybody knew everybody,” Hillian said.

Hillian said although students didn’t have the books they needed in school, she still received a great education.

Jackie’s son, Tony Hillian, said he worked as activities director when the Dunbar Center was operational.

“I really just couldn’t believe what I was seeing,” he said.

He received a text message from his mother saying “the Dunbar Center is on fire.”

He called the center the “heart of East Spencer.”

Hillian said he spent most of the night at Southern City AME Zion helping the Red Cross, the town of East Spencer and the church serve coffee and food to the firefighters and others at the scene.

He said he and the church’s pastor thought it might be nice for them to have a place to be comfortable and warm.

James Corpening of Granite Quarry stopped by to see the remnants of the former school, where he once attended. He graduate in 1957 and called his time there “the best years of my life.”

He played basketball, “because that’s all we had then” and even met his future wife, Mildred Ellis, at school.

His wife has since died, but his memories of their time at the school are happy.

He received a call from someone and then began calling other classmates on the phone to see if they’d heard.

School board member Jean Kennedy was a student at Dunbar and returned from 1967 to 1968 as an English and social studies teacher.

“I was in the first class (of 1962) to go through the new structure, the one that just burned,” Kennedy said.

“As a student I’m just most appreciative of the teachers who saw enough to teach me,” she said.

Kennedy said she was difficult to work with as a student, but said she has happy memories of the teachers who looked beyond her tough exterior to see a “person of worth.”

She said she cried when she saw what was left of the once thriving school.

“The vision is still here. We lost a building but have not lost who we are,” Kennedy said.

East Spencer resident Ethel Evans said she attended the school beginning in the first grade until she graduated in the 12th grade.

Evans said she hopes someone will see the property is a “marvelous” site.

East Spencer Alderwoman Phronice Johnson said she attended the school from first grade through 11th grade. Her fondest memories include the May Day celebration. During the celebration, the school named a high school May Day queen and an elementary school queen.

“It was more like you went to school with family. It was all one happy family,” Johnson said.

Ada Smith said she remembered when the building housed an enrichment center run by the Rev. Ronald Hash and held youth camps.

Smith added the education was nothing to be trifled with, recalling educators including Jean Kennedy and public officials like Pete Kennedy among the school’s alumni.

“Today is a sad day for the town of East Spencer. The Dunbar High School was and has been a cultural center for our community from our earliest days,” town officials said in a statement.

“It is sad to lose a monument of our community and a focus point of our history. Dunbar has been a central part of the lives of so many of our citizens,” the statement said.

“There are countless volunteers who labored through the night to control the fire and protect the neighborhood. We thank all of them,” town officials said in the statement.

The town has also asked that no one other than authorized public safety officials and fire investigators go inside the building.

“There are obviously many hazards at such a fire damaged site and we want to protect everyone from injury,” the statement said.

“Our town (fire) department, led by Chief Shawn McBride, did a marvelous job,” the statement said.

Town officials said they were greatly assisted by “our friends and neighbors” who responded to help get “the situation under control as quickly as possible.”