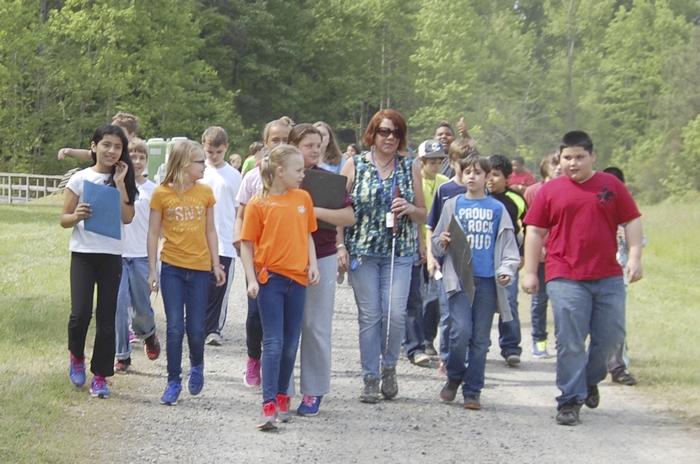 Anne Ellis guides students to bird nest boxes during an ecology class. The students charted where birds had nested and how many eggs had been laid for a national database. Jeanie Groh/Salisbury Post

Anne Ellis’ passion and excitement for environmental education is no longer one of the best-kept secrets of Rowan County. Her excellence in teaching earned Ellis statewide recognition and the North Carolina Environmental Educator of the Year award.

Ellis has been a science specialist for Horizons Unlimited, the Rowan-Salisbury School System’s science center, for seven years.

“I truly love what I teach,” she said, adding that relationships she’s able to build are especially important.

“I see the end result,” she said, “It’s the relationships I’ve built – that legacy”

As a science specialist, Ellis is one of the “go-to” people for lab development and modeling for science teachers and administrators across the district.

Each of Horizons’ science specialists tends to migrate to certain areas of science education, Ellis said.

Physical science and environmental science are the two Ellis loves, she added as she pointed out her periodic table bracelet and socks.

“It breaks my heart that kids don’t play and touch and feel nature,” Ellis said.

“It’s my responsibility to share that,” she said, adding that it spills over into the other classes she teaches.

“I’m all about discovery based learning,” she said, adding that one of her philosophies is to “never take it out of their hand and do it for them.”

She lets her students fail because she feels learning is all about the process.

One of the special classes she teaches is force in motion class for first graders.

“I do little tricks and they think I’m a magician,” she said.

Ellis was born in Delaware, but her family moved to North Carolina when she was 4 after a brief stint in Tennessee.

They lived in an old farmhouse in Cleveland County, where Ellis and her sister spent much of their time exploring the 26 acres of land the house sat on.

“I think that’s where I developed my love of nature and being outside,” she said. “We didn’t stay inside much.”

Ellis’ family moved to Rowan County when she was in sixth grade, and she attended Hurley, West Rowan Middle and West Rowan High.

“I applied to one school ­– I didn’t know there was another school,” she said. “My dad sort of brainwashed me.”

Ellis studied biochemistry for three years until she transferred to the University of North Carolina at Asheville, where she graduated with degrees in environmental chemistry and chemistry.

“I didn’t go to school to be a teacher,” Ellis said.

After graduation, she moved back to Raleigh, where she took jobs in private and government labs.

Several years later, her mother, who was an educator, told Ellis that she needed to “get a real job” and become a teacher.

On a whim, Ellis applied and interviewed for a lateral-entry teaching position and was offered two different jobs.

She accepted a position as a high school science teacher at Salisbury High School.

“The very best part of that was the first day of teaching at Salisbury High School,” Ellis said. “The art teacher knocked on my door.”

After a semester at Salisbury High, Ellis took a job at Knox Middle School, where she says she spent “seven of the best years of my life.”

She left Knox when her husband took a job in Virginia, and she took a job at an inner-city school that also boasted of a strong International Baccalaureate academic program.

“It was a beautiful mix,” she said.

When Smeltzer got a job as an art educator at the Mint Museum in Charlotte two years later, the couple moved back to Rowan County.

Smeltzer is just as passionate about art as she is about the environment, Ellis said.

“Together, we make one good person,” she laughed.

The pair have a 12-year-old son, Jude, and a 6-year-old daughter named Stella Rae.

Jude is a student at Southeast Middle School. He’s a Boy Scout and a pianist, and he loves music and the outdoors.

She attends Hurley Elementary and loves hiking and tracking animals.

Ellis’ passion for the environment doesn’t just impact her work life, but her family life as well.

“We don’t buy anything new,” she said, adding that they own old cars, buy local and combine trips into town as much as much as possible.