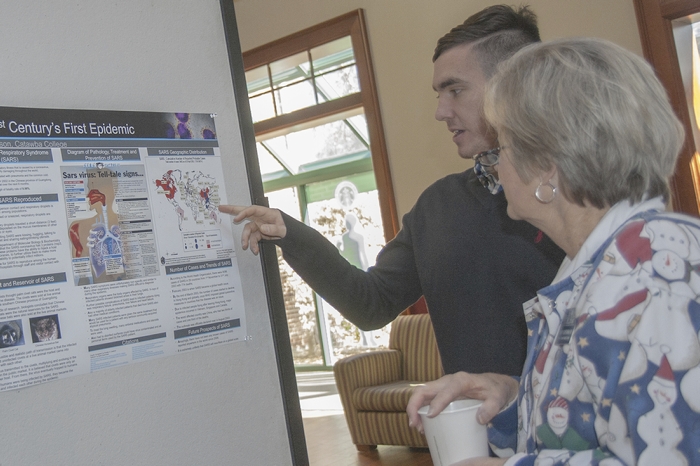 Leprosy, SARS, syphilis, rabies, rotavirus and malaria were just a few of the infectious diseases on the minds of more than a dozen Catawba College students.

Students in Dr. Steve Coggin’s honors “Outbreak” class studied the history and future of infectious diseases and shared their poster presentations as a final project. Their findings were revealing and bit alarming.

Alison Michell of Raleigh chose to study leprosy, which she described as, “definitely associated with the Bible.”

But what Michell didn’t know is that leprosy is naturally found in armadillos, and that cases in the United States occur mostly in Texas and California. Brazil and India have the largest number of cases in the world.

While Malaria was eliminated from the United States in the early 1950s, it still rages in other parts of the world.

Amber Williamson, a senior chemistry major from Lexington, learned that the World Health Organization estimates that there were 207 million cases and 627,000 malaria deaths worldwide, with most cases occurring in South Africa and Southeast Asia.

“I’m a big animal person, and anything that will help an animal out, I’m for it,” she said.

And although rabies has been almost eradicated in the United States, “we do keep an eye out for it,” Sellers said. “Every case is recorded in annual surveillance reports,” with some reports tracking rabies cases back to a particular animal.

“It is haunting to know that it infects your brain,” Sellers said.

Taylor Spillman of Boonville researched syphilis and learned that is caused by a bacterial infection that is sexually transmitted.

Penicillin is used to treat syphilis, Spillman learned, and “although it seems like it can be eradicated as a disease because it doesn’t occur in animal and humans are the only reservoir,” 12 million new cases occur globally each year.

Cayli Mena of Kannapolis selected anthrax to study because she was interested in its “bioterrorism aspect.”

“When I was younger, I was warned about eating Pixie Sticks because of the threat of anthrax,” she shared.

Sophomore Alicia Richards of Narragansett, Rhode Island, is a math major, but her research into rotavirus showed her another career path she could take. She learned that she could work as a statistician and use her math skills to help track and model the potential for various infectious diseases to spread.

Outbreak course instructor Dr. Steve Coggin said the students were able to put each infectious disease they studied into a worldwide context.

“The Outbreak students took a global look at disease. It was striking that Africa and Asia continued to struggle with diseases that are very rare in the U.S.,” he said. “This class saw, in case after case, that poverty, in many parts of the world, is a major factor of disease. Poverty is a public health issue.”

In addition to the aforementioned students, others in the Outbreak class were Emily Auwarter of Ocean City, New Jersey; Katie DeZego of Lexington; McKenzie Garrison of Newton; Chelsea Hatfield of Salisbury; Lexi Kershaw of Winston Salem; Chris Koehler of Burlington; Alysia Plafcan of Maggie Valley; Declan Stimson of Gawler, Australia and Shelby Wellmon of Salisbury.