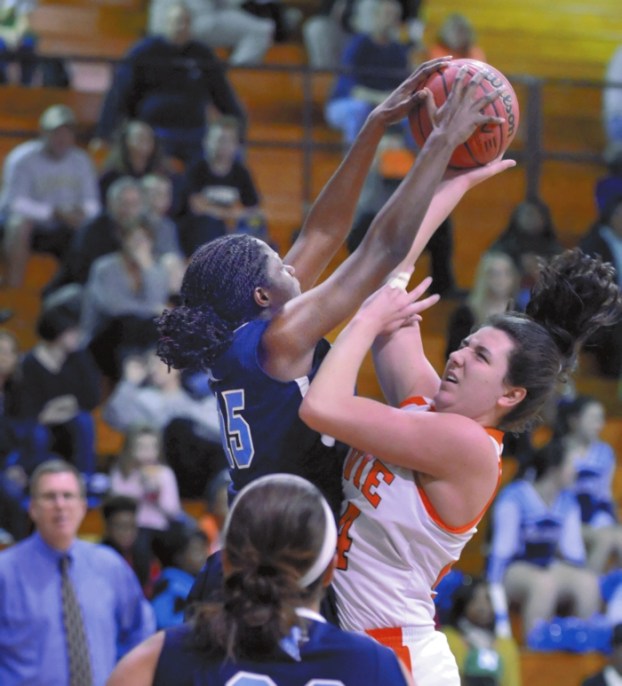 West Rowan Khaila Hall #15 uses both hands to stop a shot by Davie's Ashlyn Hampton #44. photo by Waynel Hinshaw, for the Salisbury Post

SALISBURY — Seventh-seeded West Rowan’s girls hung with No. 2 Davie for a half on Saturday, but the War Eagles overwhelmed the Falcons after the break.

Davie’s 62-41 victory  in a Sam Moir Christms Classic first-round game was keyed by 21 points by junior guard Madison Zaferatos  and 23 offensive rebounds. Davie (8-2) also had a much stronger defensive effort in the second half. The Falcons (4-7) shot 56.3 percent in the first half but 22.2 percent after halftime.

“I don’t think we played  all that badly in the first half, but No. 15 (Khaila Hall) for them was just phenomenal,” Davie coach Dave Ruemenapp said.

Hall, a junior guard, had 18 of her 25 points in the first half, including three outside shots that she banked in. Hall even banked one from the corner. She was on and hit six 3s, but she didn’t get a lot of offensive help.

Davie began the second half on a 7-0 run on two buckets by Ashlyn Hampton and one by Zaferatos to take control.

“You name it and we did it wrong in the second half,” West Rowan coach Ashley Poole said. “And they took advantage of everything we did wrong.”

Davie has three 6-footers and crushed the Falcons inside in the second half.  Hampton had 14 points and eight boards.

“There was one possession where we got five or six straight offensive rebounds,” Ruemenapp said.  “We still didn’t score, but when you have that kind of advantage inside, it can be demoralizing to the other team.”

From staff reports Concord’s standout running back Rocky Reid seemed like a natural for “Rocky Top,” but he’ll be attending... read more