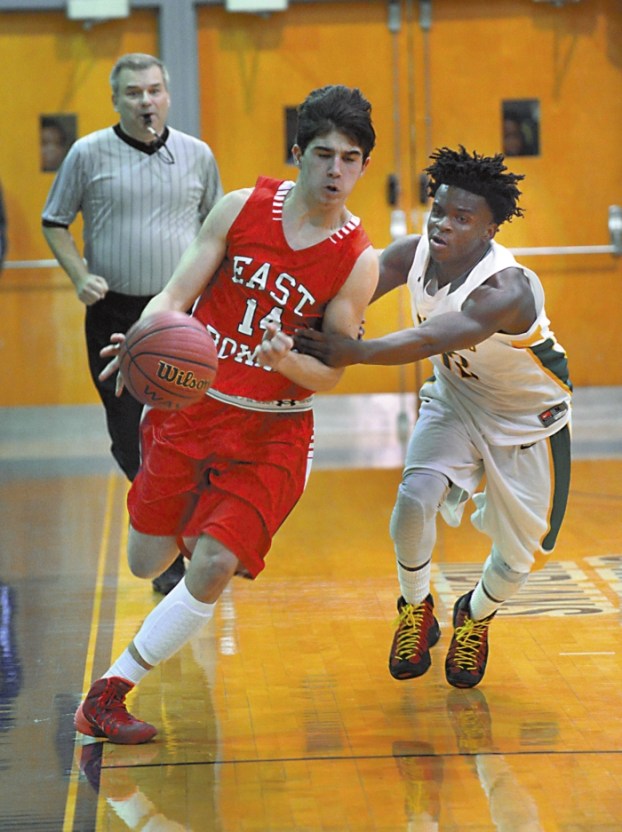 SALISBURY — East Rowan’s boys beat  defending champion North Rowan in a Sam Moir Christmas Classic game for the first time since 2003 on Saturday and took a step forward as a program.

East Rowan had not beaten the Cavaliers in any venue since the 2006-07 season. North Rowan led 40-32 after three quarters, but the Mustangs scored 29 points in a frantic fourth quarter.

Considering the heat the game generated and the playoff atmosphere at Goodman Gym, seventh-seeded East Rowan’s 61-57 victory probably was as big a win as coach Trey Ledbetter has had in his five seasons as the Mustangs’ head coach.

“We grew up a lot in this one,” Ledbetter said. “Just a huge win for our guys. We knew we were capable of winning this game and we got the great effort that we needed.”

Tay Davis , a sophomore guard, had the game-deciding bucket for the Mustangs.

“This win lets us know we can play with anyone,” Davis said. “We can be a great team.”

East Rowan (4-6) had been  just 2-9 in Moir games under Lebetter, while No. 2 seed North Rowan (6-3)  had played in four straight tournament championship games under coach Andrew Mitchell.

Mitchell wasn’t around for the end, as an already intense game threatened to spiral  completely out of control with 4:17 remaining.

When North Rowan’s Josh Handy and East Rowan’s Samuel Wyrick got tangled on the floor scrapping for possession, stare-downs  followed  and things quickly escalated.  Benches stood, words were exchanged, and, by then, both  head coaches were on the playing floor.  Technicals were assessed. Officials attempted to restore order, and Mitchell said he was restrained too aggressively.

“An official pushed me,” Mitchell said. “Another official told me  he didn’t mean to push me, but I know what an elbow feels like. I said I didn’t like the way they were putting their hands on me. Then they gave me another technical and threw me out of the game.”

As Mitchell was escorted from the gym, longtime assistant Bill Kesler  assumed command of the Cavaliers.

“I don’t know about tempers flaring or anything like that,” Kesler said. “But when your coach gets pushed, it can get a little crazy.”

A technical foul against Alexis Archie, who mildly celebrated taking a charge from Wyrick, helped the Mustangs catch up, and they pulled even at 50-all on a Wyrick free throw.

Returning to action after missing several games with a concussion, East Rowan floorleader Bravon Goodlett hit two free throws for a 52-50 lead with 2:20 left. Logan Shuping’s 3-pointer from the right corner with two minutes left put the Mustangs on top 55-51.

The  Cavaliers pulled within 56-55 on a drive by Jalen Sanders with 1:05 left. Then a steal by Henderson Lentz led to a Handy layup and a 57-56 North Rowan lead with 18 seconds remaining.

Davis got the ball on the Mustangs’ final offensive possession. North Rowan appeared to have him contained 30 feet from the hoop, but he split a double-team  with a dribble and attacked.

“They tried to trap me, but I got though it and then I saw a lane to the basket,” Davis said.

Davis, a football cornerback, made a physical layup as he was fouled. He completed his clutch and-one at the free-throw line, and the Mustangs led 59-57.

Sanders drove hard on North’s final possession, but his shot didn’t fall. Wyrick grabbed the rebound, dribbled away several seconds  and made two free throws for the final margin.

Goodlett (18), Davis (12) and Austin Love (12) led the Mustangs. Naquis Caldwell had eight rebounds, most of them down the stretch.

“We didn’t shoot 3s very well and we didn’t play defense very well,” Kesler said. “But the difference was  East shot 31 free throws. I guess East did a better job of getting fouled than we did. Jalen (Sanders) was attacking and getting knocked around pretty good, but he  didn’t get many calls.”