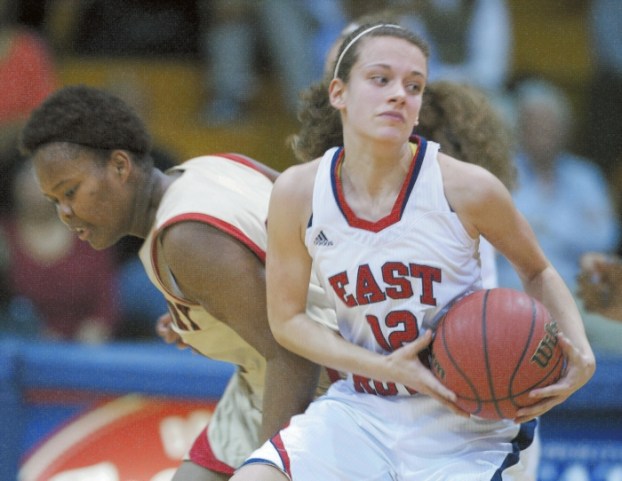 SALISBURY — All systems are Go for East Rowan’s girls — even if it wasn’t the smoothest of takeoffs.

“I would have liked for us to have been sharper in the second half,” winning coach Danielle Porter said at Goodman Gym, where East (9-1) earned its sixth straight win and advanced to Monday’s semifinal round. “We started with a lot of intensity and sort of went away from that. I told them at halftime we needed to do things the same way, regardless of the score or anything else.”

East, which lost in last year’s championship game and hasn’t won the tournament since 2001, opened an 18-1 first-quarter lead essentially played even with eighth-seeded Salisbury (2-9) the rest of the way. “We came out with a lot of energy,” senior Jocelyn Lowe said after contributing seven points and five assists. “But this was the third time we’ve played them, so we knew what to expect. The thing is they made shots they hadn’t made before.”

East was paced by Shenell Pharr’s game-best 21 points. Teammate Kelli Fisher, limited to 15 minutes due to an illness, added 13 points and seven rebounds. The Mustangs owned a pronounced 46-30 advantage off the boards.

“It was nerves,” said SHS coach Lakia Brice. “My younger players were very nervous in the first quarter. I had to settle them down and tell them to just play.”

Pharr made a couple of early 3-pointers and scored 11 of East’s first 13 points, leading the first-quarter charge. “Well, I focused for today’s game,” she said after finishing with five long balls. “We came out, my teammates got the ball to me and (Salisbury) was giving me space to shoot.”

The Hornets trimmed their deficit to 13 points a couple times in the fourth period, but never got closer. “We were attacking like I wanted them to,” Brice said after Salisbury shot 27 percent from the field. “The shots just weren’t falling. It’s not like we were turning the ball over all night.”

East shot 36 percent from the floor in a pedestrian performance. But after falling to North Rowan in last season’s final the Mustangs have dubbed this holiday tourney unfinished business.

“Our mindset is the same as last year,” said Lowe. “We’re going to take it one game at a time knowing our ultimate goal is to win the championship. I think we’ve got a shot, a good shot.”

From staff reports Concord’s standout running back Rocky Reid seemed like a natural for “Rocky Top,” but he’ll be attending... read more