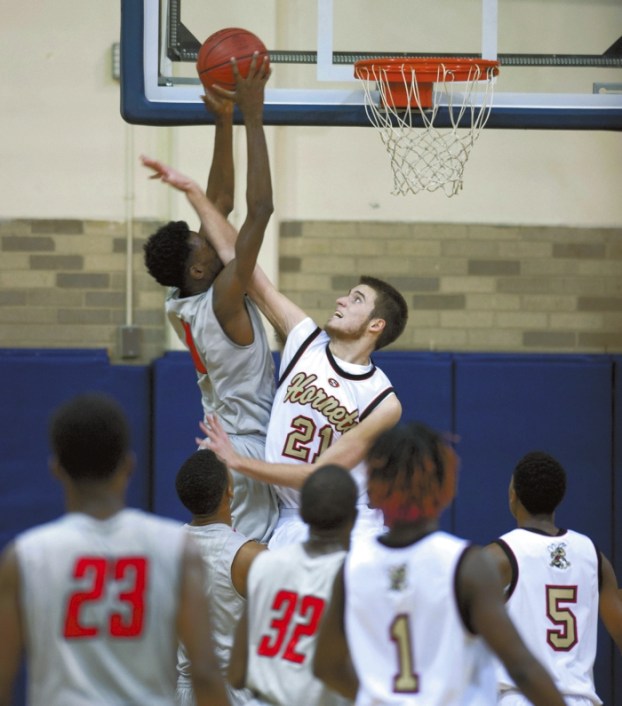 SALISBURY — For weeks Bryan Withers has been telling us that his South Rowan boys basketball team is pretty good. It’s beginning to look like he was right.

On a day when the top three seeds succumbed, the eighth-seeded Raiders pulled the biggest upset in the opening round of the Sam Moir Christmas Classic — edging top-seeded Salisbury 62-59.

“Our strength doesn’t come from success,” Withers, South’s second-year coach, said at Catawba’s Goodman Gym. “It comes from failure. We’ve lost a lot of close games. We’ve been hurt and we’ve been down, so this only makes us stronger.”

It also makes them a semi-finalist. South (3-7)  coughed up all of a 30-21 second-quarter lead and trailed 50-49 after DaShawn Troutman scored off a fast break with 6:17 remaining. But the Raiders persevered, allowing just one field goal in the final three minutes and were finally rewarded.

“This time we finished,” 6-4 senior Lavon Hill said after his double-double (19 points, 10 rebounds). “The fourth quarter was the key and we played well in the fourth.”

The score was tied 10 times — three in the final period — the last when Salisbury’s Donnell Alexander hit a stickback with 3:08 to play. “South is better than people think,” Alexander said after SHS fell to 8-3. “They rebound, they play hard, like they want it. The end of the game went down to the wire, but we made more mistakes than they did.”

South went ahead when guard Qwantarius Rhyne scored on breakaway layup with 2:05 on the clock and padded its lead to 60-57 when Hill converted the second of two free throws 40 seconds later. Troutman scored the last two of his game-high 22 points with 15 seconds to go before Rhyne closed the scoring a pair of late free throws. Salisbury had a chance to force overtime but misfired on two three-point attempts in the last six seconds.

“I thought they were going to make one,” Rhyne said with a smile after shooting 8-for-14 and netting 21 points in just his fourth game. “The way it looked, I thought we were going to OT.”

Instead the Raiders, who were outrebounded 41-33, charged the court in celebration. It left Salisbury coach Jason Causby searching for answers. “Defensively we did just enough to get by, but offensively we weren’t very good,” he said. “In the beginning of the game, when it was 2-0 for the longest time, we missed a bunch of shots inside. It easily could have been 8-0 and a different story.”

SALISBURY — Not many opponents did not know the name of the prolific scorer in Carson’s No. 14 jersey. Brandon... read more