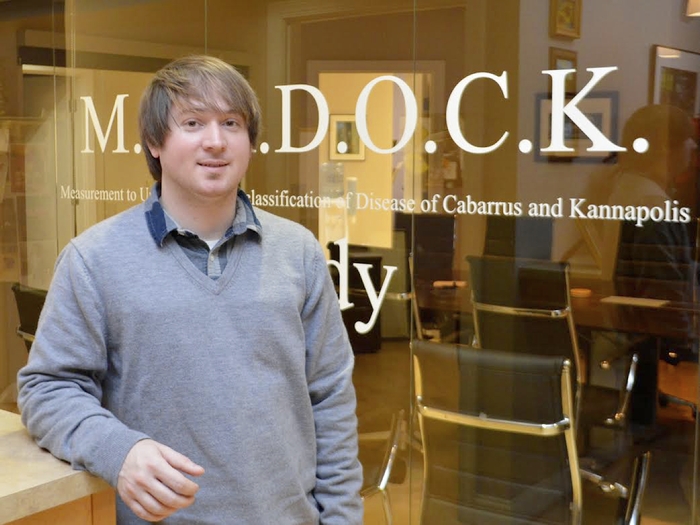 SUBMITTED PHOTO Gregory Childers, 30, of Kannapolis has become the 11,000th person to join Duke UniversityÕs MURDOCK Study. Childers spent a decade as the primary caregiver for his ailing grandparents and decided to join the study after watching them suffer from diseases being studied by Duke researchers and their collaborators.

KANNAPOLIS — Gregory Childers grew up in Kannapolis, cherished by his grandparents in a house on Corriher Street not far from the North Carolina Research Campus.

Olin and Betty Childers took good care of their grandson.

When Childers was in seventh grade, that started to change. His grandparents’ health began to deteriorate, and Childers noticed they could no longer balance the checkbook or manage other household chores as their type 2 diabetes symptoms worsened and they began to show signs of Alzheimer’s disease.

By the time he was 16 years old, Childers was the primary caregiver for his grandparents, injecting them with insulin, answering their calls in the middle of the night, picking them up when they tumbled out of bed.

With help from other family members, Childers remained their primary caregiver for a decade, watching a slow decline. His grandmother lost both legs to diabetes, and his grandfather’s body was ravaged by cancer. The couple eventually moved into a nursing home and, after 59 years of marriage, passed away in 2009 and 2011.

At age 30, witness to the debilitating effects of diabetes, cancer and Alzheimer’s, Childers became the 11,000th person to join Duke University’s MURDOCK Study, based at the North Carolina Research Campus.

During his grandparents’ final years, Childers had watched the development of the campus with keen interest. The biotechnology hub stands on the ruins of the former Cannon Mills Plant 1, where his grandparents both worked before running Strickland’s Florist.

Childers started to follow the MURDOCK Study on Twitter and read about Duke University’s efforts to understand disease at the molecular level, including the illnesses that he said eventually took his grandparents’ lives.

Not only did Childers enroll, but he also encouraged friends to take part in Duke’s unique research project.

“I think everyone should support the MURDOCK Study and the North Carolina Research Campus,” Childers said. “You never know. Your blood could be the missing key to open the door to a new day.”

Perla Nunes, who directs community outreach and recruitment efforts for the MURDOCK Study, said reaching 11,000 volunteers is an important milestone. Men have been slow to enroll, so Nunes said she was thrilled to learn that that 11,000th participant was male, and she hopes it will encourage other men to step up.

Childers had no idea his enrollment marked a milestone until Duke staff contacted him, Nunes said.

“He didn’t do it because he was going to get recognition. He just did it because he thought it was the right thing to do,” she said. “He thought about his grandparents and what they had gone through. By enrolling, he is truly participating in something that might help someone else not suffer like they did.”

Duke University is working to enroll 50,000 people in the MURDOCK Study Community Registry and Biorepository. Volunteers like Childers spend about 45 minutes providing their health information and donating small samples of blood and urine.

Nunes noted that Childers is 30 years old and said the MURDOCK Study needs more young people so the registry will look like the Kannapolis and Cabarrus County area.

Researchers need health information and biological samples as they work to reclassify disease using advanced scientific technologies and a network of collaborators. Duke aims to ultimately identify links across major diseases and disorders and find ways to treat and even defeat some of today’s leading causes of illness and death while tailoring treatment to the individual, also called personalized medicine.

Childers met Murdock during demolition of the old textile mill, before the Research Campus rose from the ashes. Childers was working at a local ice cream shop when Murdock stopped by to encourage the shop to sell healthy items like smoothies and fruit bowls. Childers said they did, and the healthy fare sold well.

“I want to thank Mr. Murdock personally for all the work he’s done in Kannapolis. This is my city that I grew up in, and I have such fond memories of it,” Childers said. “If he would not have stepped in, it would have been a ghost town, or who knows what would have become of it.”

Childers has been interested in biotechnology and healthy eating for years, even growing his own pineapple once. “It was terrible,” he said, laughing at the attempt. But he takes his health and his family history of disease seriously.

As someone who might be at higher risk for multiple illnesses, Childers said he hopes scientists can learn from his donated biological samples. He said he decided to enroll in the MURDOCK Study because he knows researchers need samples to compare from all kinds of people, sick and healthy.

“Seeing how these diseases affect people toward the end of their life is a very hard thing to go through,” he said. “My hope is that one day, the MURDOCK Study could help find cures for cancer and other diseases, as well as better treatments and early prevention.”

People who live in Kannapolis, Cabarrus County and small portions of Rowan, Stanly and Mecklenburg counties are eligible to join. Duke offers enrollment at 10 convenient locations. To start the process, call 704-250-5861 or visit www.murdock-study.org. Participants are compensated.

After devoting a decade of his life to caring for his grandparents, Childers earned an associate’s degree in computer information technology from Rowan-Cabarrus Community College in 2014. Next fall, he plans to transfer to Appalachian State University and pursue a degree in technology education. Eventually, Childers would like to teach high school.