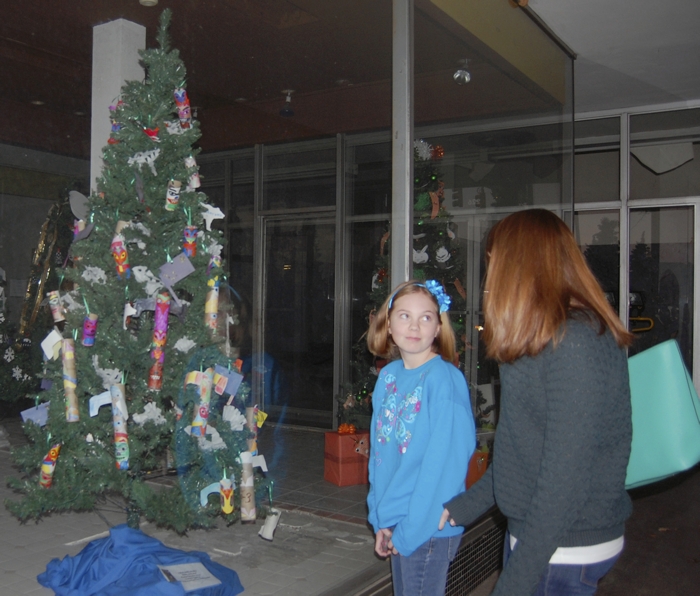 Next time you’re in downtown Salisbury, make sure you take a trip down Main Street to inspect some very “novel” Christmas trees.

Media coordinators at each participating Rowan-Salisbury school selected a book, and then students created ornaments and decorated the trees that are now on display in several storefronts on Main Street between Fisher and Bank streets.

“It keeps literacy at the forefront of everything,” said Kelly Feimster, director of instructional programs, adding that the students got to explore “all the creativity that goes into being an author or illustrator.

She said the project encouraged her students to work on a variety of reading and literary skills and to take their understanding of the book “to a deeper level.”

Many of the media coordinators, including Shue, chose to collaborate with their school’s art teachers to create a cross-curriculum experience. At some schools, just one class or grade worked on the trees, while at other schools, students from across the school participated.

Erwin Middle School based their tree on “Where the Wild Things Are.”

The students read the book and compared it to the movie.

In art class, they talked about cross hatching, an artistic technique used in many of the illustrations, then

Robinson had her sixth graders practice cross hatching and use as they made their own wild things ornaments.

Sally Ervin-Marby’s sixth grade English classes at Granite Quarry Middle School decorated their tree to go along with “Out of the Dust,” which is set during the Great Depression.

Rather than decorate a Christmas tree, however, Ervin-Marby’s students used bare branches, because they felt it was more appropriate for their book.

“I really wanted to push them to do more than character and setting,” she said.

Ervin-Marby had her students discuss the theme and symbolism of adversity in “Out of the Dust.”

“Symbolism is a tougher skill for students to grasp,” she said.

Each student made two ornaments – one that represented adversity talked about in the book, and the other represented how they overcame it.

“It caused them to think deeper about it,” Ervin-Marby said. “I was really proud of some of the discussions they had.”

Paula Bohland, the executive director of Downtown Salisbury, Inc., said allowing the students to display their work in empty storefronts was a win-win.

“We have vacant spaces downtown,” she said.

Those spaces seemed like “a really good avenue to highlight students,” Bohland said, adding that the displays make those empty spaces a “resource” rather than a “blight.”

“This is our first project of hopefully many,” Feimster said.

The trees will remain on display until Jan. 6.