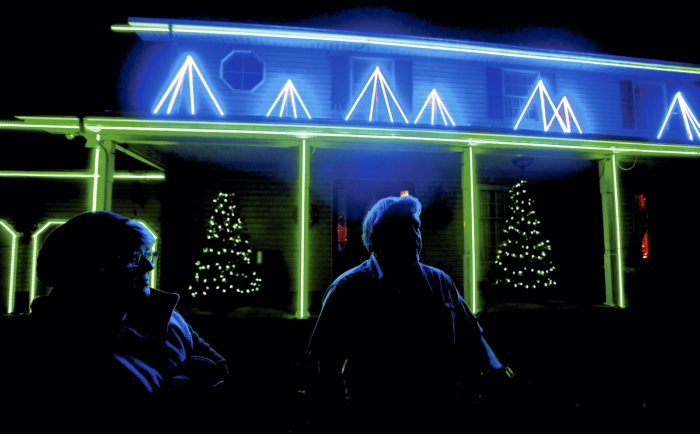 JON C. LAKEY / SALISBURY POST Jeff (right) and Patti Miller have turned their home on Corriher Gravel Road into a destination spot for Christmas light admirers. A computer controlled light show activates the house decorations in sync to the music broadcasted over a low power FM transmitter. Motorists can tune their car radio and listen to the thirty minute recorded show.

SALISBURY — It’s hard to believe, but Jeff Miller’s holiday extravaganza, which he has titled “Lights of Christmas,” plugs in with one cord and is run by a small computer in the basement.

You’ve probably seen it — or should — when you turn off U.S. 29 South, across from Mount Hope Church Road and travel west on Corriher Gravel Road.

Miller and his wife, Patti, reside in the first house on the right on Corriher Gravel Road, but the best vantage point for viewing their Christmas lights and listening to the program is probably down the road at the truck entrance for Corriher Sand & Stone Inc.

Tune in your vehicle’s FM radio station to 107.3, and you’ll find yourself listening to songs and narration synchronized to a light show played out on the Millers’ house, which lies well off the road and across a field. The entire show is 27 minutes long, so you might be joining the “Lights of Christmas”  at the beginning, middle or end, depending on when you drive by.

There’s a three-minute break between shows when the house is dark, in case you look for the lights and can’t see them. “Lights of Christmas” plays from 5-10 p.m., except for Fridays and Saturdays, when it goes from 5-11 p.m.

“I’m sorry, this is all him,” Patti Miller says, giving Jeff the credit for the lights, though she makes a mean peanut brittle. “I have no intellect for this.”

Jeff Miller has instrumentation and electrical engineering in his skillset and works  for the engineering department at Duke Energy’s McGuire Nuclear Station, but he says he probably learned more about putting this show together by volunteering for Piedmont Players. Director Reid Leonard showed him some of the intricacies of the light and sound boards, “and this is the same technology they use in the theater,” Miller says.

After watching a YouTube video of Christmas light synchronization one year, Miller told himself, “I’ve got to do this.” But  for several years, he held off on his big splash into the local Christmas light-decorating scene while he was doing research.

Last Christmas, he unveiled his first show. The best thing that happened was when he received a card from two boys, Seth and Nathan, who thanked him for his lights.

Miller didn’t know the boys, but he kept the card and sent a note back to them this year describing how he was going to incorporate a big snowman into the lights and story. Miller also told them he was using the snowman on the front of their card as a model.

Miller ended up building a 16-foot tall snowman, who goes by the name of “Cool” in his show. He constructed the frame and lights in two 8- by 12-foot sections in his basement.

It took the whole family to hoist Cool up and get him situated on the roof of the garage, Patti says.

His “Lights of Christmas” incorporates two characters: Cool, the narrator, and Rupert, the Christmas fairy, who speaks only by the sound of a bell ringing. All the synchronized LED lights flashing on and off in a full rainbow of colors are supposed to be woodland fairies dancing with the music.

Jeff is the voice of Cool. He laughs, describing all the voices he tried and how they all sounded pretty redneck. He ended up going with his regular voice.

Most of the Christmas songs that play — there are seven per show — are music from the Trans-Siberian Orchestra. Miller actually plays two 27-minute shows that differ a little bit between each other. In all, he offers 10 different songs, but you would have to stay for both shows to hear them all.

Miller says he depends on Light-O-Rama software to run everything. “Their programming just made it real easy,” he adds.

“Lights of Christmas” represents the Millers’ gift to the community at Christmas. And the spirit leading Jeff to put this all together goes back to his childhood when he and his parents would drive around looking at people’s holiday decorations.

Given this is only the second year for his display, Miller doesn’t rule out expanding his “Lights of Christmas” in years to come.

“He’ll add more,” Patti says. “He’ll think of something. … He loves doing it and loves lights and sound.”

The show might be playing well past New Year’s Day, because Patti plans to host a meeting for her handmade ornament club in mid January and would like to impress her visitors.

Patti and Jeff can’t help but finding themselves being fans, too.

“Occasionally, we’ll go over there (across the road) and watch the show,” Patti says.