Christmas cupcakes sure to please any audience 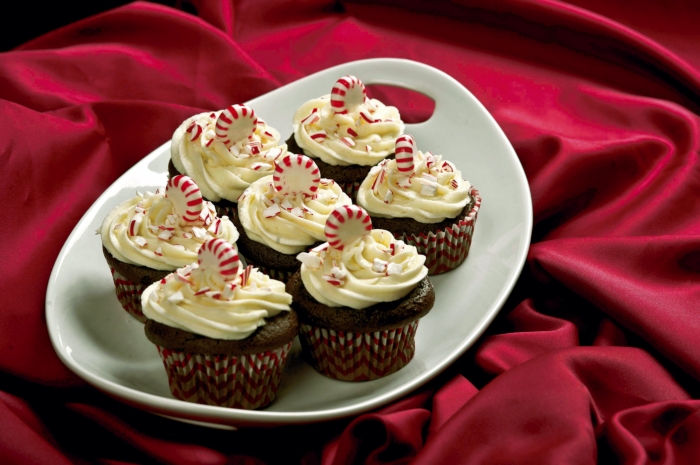 As much as I would like to be, I will never be the next Julia Child, Rachel Ray, Giada de Laurentiis or Paula Deen.

I’ve dabbled in the kitchen a bit, and for the most part my cooking skills can be described as average. Sometimes I get really lucky, and other times, I burn grilled cheese.

But there is one thing I’m known for – cupcakes. In fact, some of my friends took to calling me “Jeanie Groh, cupcake pro.”

My relationship with cupcakes has changed significantly throughout the years.

As a child, I thumbed my nose at them. I always thought birthday parties with “real cakes” were far superior to those with cupcakes.

But during college, my tune began to change. I don’t know if it was the time my friends and I made tie-dye cupcakes, or the day I randomly decided to search for “cute cupcakes” on the Internet (I’m sure I should have been studying for exams or writing research papers), but I was hooked.

My fascination with cupcakes continued to grow as I spent a semester interning in Washington, D.C. Not only was I surrounded by some of the finest cupcake bakeries in existence, such as Georgetown Cupcake, Sprinkles and The Sweet Lobby, but I also discovered that baking is an incredible stress reliever.

When I graduated, my parents gave me my most prized possession – a Tiffany blue KitchenAid mixer.

By the end of the summer, I was making cupcakes every few weeks for my small group (and from what I hear, they still miss my cupcakes).

Cupcakes have become my love language. I take them to bridal showers, surprise my friends with them for their birthdays and bring them into work.

Throughout the years, I’ve developed a number of different recipes, but I realized that I’ve never delved into the realm of Christmas cupcakes. So, several weekends ago, I decided to finally work on getting a winter recipe down pat.

Although I momentarily considered fruitcake (just kidding) and egg nog recipes, there really wasn’t much debate over what type of cupcake to tackle – just like autumn is for all things pumpkin, winter is for all things peppermint.

I spent a few hours brainstorming the different cake, frosting and topping combinations, and then I made my grocery list.

I employed the help of my wonderful boyfriend, David, to narrow down the options. After several hours, we had narrowed the options down to two, accidentally discovered a recipe for Thin Mint cupcakes and vowed to never eat sweets again (that lasted for maybe a day).

The Post’s crime reporter, Shavonne Walker; her husband, Vanzie, and her 5-year-old step-son, Jeremiah, narrowed the two options down to one. That decision was solidified the following day at work.

So, if you’re entertaining this holiday season, need a festive dessert to take to a Christmas party or just feel like indulging in peppermint-y chocolaty goodness, this is the recipe for you.

My favorite part of these cupcakes is the rich, dark chocolate peppermint filling – it’s what takes this recipe from good to great.

Here are some things to know about this recipe.

First of all, I add a box of instant pudding mix to my cake mix – it makes the cupcakes so moist.

Also, I substituted butter for the shortening in the frosting recipe. Many buttercream recipes call for both ingredients, but my mom always made her buttercream frosting without shortening when I was growing up, so I prefer the taste of it that way.

Store the cupcakes in the refrigerator and take them out an hour before serving. Top with garnish right before serving (the peppermints will run if you leave them on overnight).

1 box of instant pudding mix (just the mix, not prepared)

Eggs, oil and water as directed on the cake mix

To make the cupcakes

Add the pudding mix to the cake mix, and then prepare the cake mix as directed on the box for 24 cupcakes.

To make the filling

Melt the butter and stir in the cocoa. Beat in the powdered sugar and milk, alternating between the two, until it’s smooth and spreadable. Stir in vanilla and peppermint. Add additional powdered sugar to thicken, or milk to thin.

Remove the core from each cupcake with a cupcake corer, knife, citrus juicer or similar implement.

Fill the centers with the dark chocolate peppermint filling.

Pipe the Peppermint buttercream icing onto the cupcakes, and then sprinkle each cupcakes with the crushed candy canes and top with a starlight mint.