Matthew Brown prepares for his organ recital at Westminster Abbey 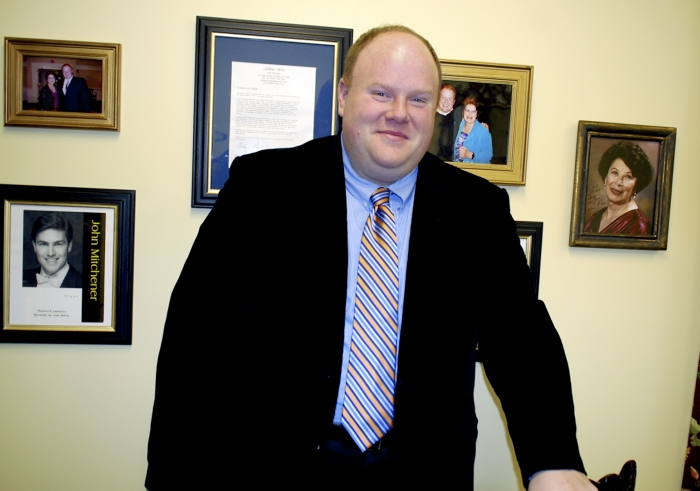 Close to Brown were David Hill of the BBC Singers; James Vivian, organist of Temple Church; Tim Wakerell, sub-organist at St. Paul’s Cathedral; and directly in front of him, James O’Donnell, master of music at Westminster Abbey.

O’Donnell wondered what had brought Brown all the way from the States, and Brown explained he could not miss the last public performance of famed organist Dame Gillian Weir, one of his teachers and mentors.

‘Well, any student of Dame Gillian’s must perform in the Abbey,” O’Donnell said, extending the invitation — and later confirmed in an email on Brown’s return to Salisbury — for Brown to play the organ at Westminster Abbey.

Come this Sunday, at 5:45 p.m. London time, Matthew Michael Brown, organist and director of music at First United Methodist Church in Salisbury, will sit down at the Harrison and Harrison organ of the abbey and begin a 30-minute solo recital within England’s most hallowed ground, the place where folks such as Charles Dickens and Isaac Newton are buried.

As a teenager watching the funeral of Princess Diana at Westminster Abbey, Brown noted how eloquently the music had been presented. He told his parents  he wanted to play there some day.

So that day has come for the young organist, who is only 32.

Maybe the scariest part leading up to the recital is that Brown will have only three hours Friday evening to practice on the Westminster Abbey organ and learn the acoustics, tempo, timing and regulation. This model dates back to 1937 and the coronation of King George VI.

“The organ is a living, breathing thing, a wind instrument, ” Brown says. “It reacts to how you treat it. It tells you pretty quickly how it wants to be played.”

About 25 people from Salisbury — many of them from First United Methodist — will be taking the trip with Brown and making it a six-night London vacation.

“I’m there sort of to work,” Brown says, “But I’m just so excited and honored to share the experience with them.”

Another U.S. contingent will be attending the recital from the N.C. School of the Arts in Winston-Salem,  where Brown graduated in 2004. Students from the school’s organ studio are studying abroad and will have the chance to sit in at Brown’s recital.

As important, Brown will use the Westminster recital as the world premiere of a specially commissioned work, “Aria (With Diversions),” by noted N.C. composer Kenneth Frazelle, one of the instructors Brown admired greatly at the N.C. School of Arts. Frazelle has composed work for the likes of Yo-Yo Ma and Dawn Upshaw, but “Aria” represents his first work ever for the organ.

Thomas S. Kenan III and the Kenan Institute for the Arts commissioned Frazelle’s composition. Brown says Kenan has been his greatest benefactor, having paid for his college education. The Kenan family also underwrites the entire organ program at the N.C. School of the Arts.

After securing the invitation to play at Westminster Abbey, Brown had written Kenan to update him on his work and mention the opportunity to commission the new organ work by Frazelle, still an instructor at the School of the Arts.

Brown originally asked Frazelle to consider composing something five to six minutes in length, but it became a “10-minute work of great beauty,” he says. Brown spent several sessions with Frazelle, explaining the things an organ can and can’t do.

“He really poured his heart into the work,” Brown says.

The organ at Westminster Abbey is central to its daily liturgy. Organ recitals take place every Sunday and are given by abbey organists and visitors from across the world, such as Brown.

The Summer Organ Festival also brings some of the world’s most noted organists to Westminster Abbey.

Brown’s Gillian Weir connection came after he earned his master’s of music degree in organ performance and literature from the Eastman School of Music in Rochester, N.Y., and the Sacred Music Diploma from the Institute of Musical Leadership.

Brown moved to New York City after graduate school and served on the musical staff of Grace Church. He also was studio pianist for former Metropolitan Opera soprano Rita Shane. While in New York, he continued his organ studies for two years with Weir, by either traveling to see her during her performance dates in the States or visiting her in England.

Brown describes Weir as “the pinnacle of my instructors,” and he says she was completely devoted to him, often interacting with him more as a coach than a teacher.

“She was more of the big picture kind of woman,” Brown adds.

Retired now, Weir lives in an apartment near Winchester Cathedral in Durham, England. Brown is hoping she can make the recital in London.

While attending the summer organ academy in France one year, Brown struck up a friendship with classmate Wakerell, sub-organist at St. Paul’s Cathedral. That connection led to Brown’s organ recital at St. Paul’s in October 2010.

Brown has spent so many hours on practice and preparation for his Westminster Abbey recital that he thinks he’s ready. The main challenge before Sunday will be getting comfortable with the abbey’s organ.

Brown’s credentials in music and what he has accomplished in playing the organ might make him seem overqualified for Salisbury. Brown won’t hear of it.

“Salisbury is perfect for me,” he says. “I have been overwhelmed by this community in many ways. The pace of Salisbury seems to fit my life, and the grass is not always greener other places.”