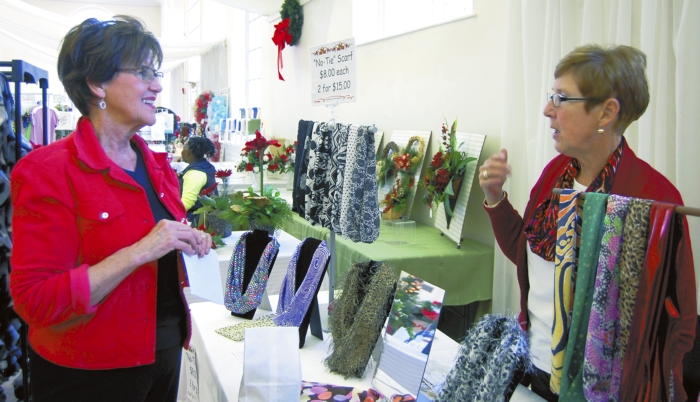 Those who wanted a different Christmas shopping experience this weekend made their way to Kannapolis’ Holiday Market Friday and Saturday.

Soft strains of Christmas music set the mood as 18 to 20 vendors displayed their wares — most of which were handcrafted.

The market sold “everything from candles to cakes,” said Phyllis Beaver, who helped organize the event.

Shoppers could also go on a carriage ride and meet with Santa.

It’s “a different way of shopping,” Beaver said. “It gives people the opportunity to support the small-business person and purchase something that is one of a kind.”

“We think it’s great because it falls on Small Business Saturday,” she added.

“A lot of people who lost their jobs in textiles started making items in their homes,” Beaver said, adding that the goal of the market is to “increase awareness and support these cottage industries.”

Last year, the market was held in the Cannon Towel Store, but this year it moved back to Cannon Village in downtown Kannapolis because the store is currently undergoing construction.

Because of the move, they had to limit the number of vendors — cutting the number by 12 vendors this year.

She said they were initially concerned that the market would have fewer vendors and be held in a smaller space, but it’s been their best year for sales in the four years they’ve been at the Holiday Market.

“I think it’s been really good, actually,” Yost said. “Even if it has been a smaller number of people, they have been buying.”

“If the vendors are happy, I’m happy,” Beaver said.

“We like coming here because this is our community,” Yost said. “Anything supporting agriculture and small businesses we are for.”

“There’s a camaraderie between the person who is here and who is selling the item,” Beaver said.

“I’ve had people come by and thank me for hand making my scarves,” said Barbara Sisk from Salisbury. “People are thinking of simpler times. Things are so complicated — so busy.”

Karen Pless, who spent Saturday afternoon shopping at the Holiday Market, said the environment is a “nice change from the big box stores.”

Pless said she’d purchased coasters, jam, blueberry vinaigrette and grape juice so far, and still planned to look at the homemade jewelry for herself and bows for her nieces.

“I just think it’s so important to support the local businesses,” she said.