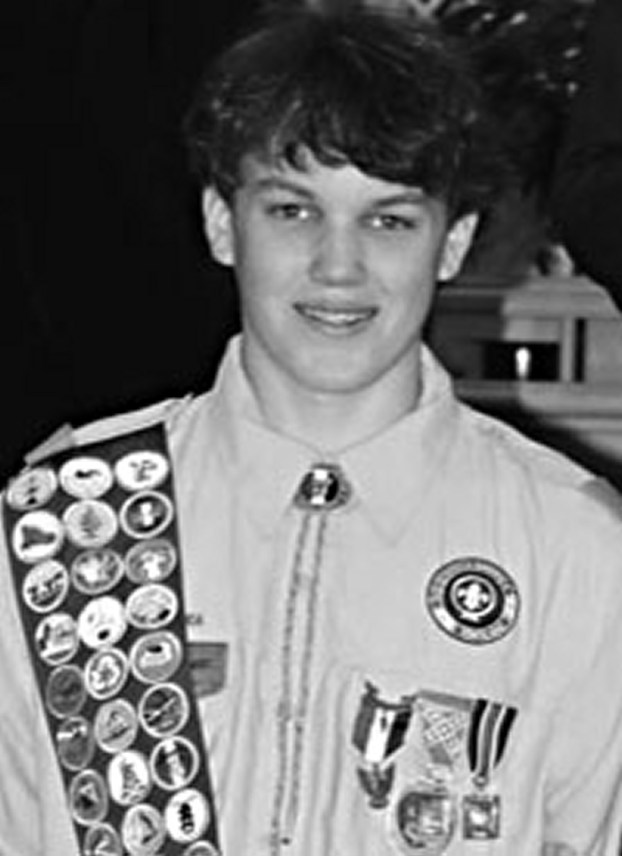 Walker Shellhorn received his Eagle Scout Award Nov. 16, 2014, in a ceremony at First Prebyterian Church. Walker joined Cub Scout Pack 443, sponsored by St. John’s Lutheran Church, August 2006. During the next five years, he earned his Tiger, Bobcat, Wolf and Webelos bad­ges. Walker also earned religious awards God and Me and God and Family. In February 2011, he earned the Arrow of Light Award, the highest rank in Cub Scouts.
Walker joined Boy Scout Troop 443 in March 2011 and earned Tenderfoot, Second Class and First Class, Star, and Life between 2011 and 2012. During his Scout tenure, he has served as Quartermaster, Liberian, Patrol Leader and Assistant Senior Patrol Leader. In 2013, he was ­elected to and joined the Order of Arrow, BSA’s National Honor Society for experienced Scouts. He is currently an Ordeal member of the Order of Arrow. Walker has earned 44 merit badges, the Young Eagles Flight Certificate, the World Conservation badge, the Historic Trails Award, the Leesburg Historic Trail Award, Manassas Historic Trail Award, and Scout Spirit Award in 2012 and 2013.
In scouts, trips and excursions were used to build scout skills and character. Walker has camped over 60 nights and hiked numerous miles. Some of his outings include camping at St. Johns Retreat Property, Sugar Valley Airport, Rowan County Wildlife Club, Uwharrie National Forest, hiking Leesburg Historic Trail and Manassas Historic Trail. He has attended BSA summer camp for five years at Camp Barnhardt in Stanly County, and one year at Camp Daniel Boone in Asheville. He worked on staff at Camp Barnhardt for five weeks in 2014 teaching Ecology, First Aid, Emergency Preparedness and assisted in the kitchen. In 2011, 2012 and 2013 his patrol earned the National Patrol Award.
For his Eagle project, Walker organized, designed and built a 3/4-mile nature trail at Sacred Heart Catholic Church and School, where he is an alumni. Creating the trail involved clearing brush, stumps, rocks, and debris. He built a bridge for people to cross, spread 58 tons of gravel, planted numerous trees, plants and bushes along the entrance and cleared areas along the creek. He also placed large boulders along the beginning of the trail. The trail has been used for the cross-country team, science class and many other activities at the school. His project involved over 70 people and over 650 service hours including family, friends, fellow Scouts, church members and Sacred Heart Staff and volunteers.
Walker is a freshman at Gray Stone Day School. He is a member of the Students Supporting Troops and Knight Nation. He plans to be part of the Marksmanship Team in the spring.
Walker is a member of First Presbyterian Church, a 2014 Confirmand, Senior High Youth Group and TWAM. He plans to attend a mission trip to Costa Rica the summer of 2015 to assist in building two houses and also work on staff at Camp John J. Barnhardt.
The son of Douglas and Amy Shellhorn, he is the grandson of J. Robert and Brenda Anderson of Salisbury and the late W.B. and Faye Shellhorn.