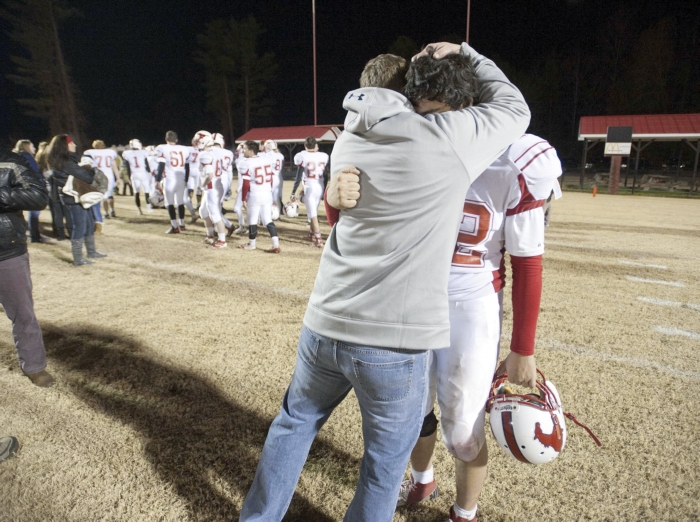 BELMONT —  It was a track meet of a 3A third-round playoff game that included more than 1,000 yards of offense.

In a 42-32 loss to No. 6 Belmont South Point, No. 15 East Rowan’s senior quarterback Samuel Wyrick threw more passes than any Rowan County quarterback had ever hurled in one night — and he also completed more.

Seth Wyrick, the other half of the Mustangs’ sibling passing combination, also had a monster game with 14 catches for 180 yards.

“Nobody could stop nobody,” South Point coach Mickey Lineberger said. “That’s what we talked about at halftime. Just give me one stop. We’ve got to get one more stop than they get.”

East Rowan was a No. 15 seed that was supposed to be done two weeks ago. The Mustangs didn’t get that memo. They showed up in Belmont, played a wonderful first half on offense, and lost only because South Point gave Lineberger that one huge stop he begged the team to make.

There were only two turnovers and they came almost back-to-back. Trying to protect a 35-32 lead in the fourth quarter, it appeared South Point’s Red Raiders might pound 99 clock-eating yards for a backbreaking score. On fourth-and-1 at the East Rowan 27, South Point fumbled, and East Rowan’s Trent Townley pounced on the ball.

“They’re a very tough team, and it just came down to being in the right place at the right time to stop them,” Townley said. “I saw that ball pop out, and I jumped on it.”

Townley’s recovery with 8:05 left to play gave the Mustangs a chance to drive for a go-ahead score, but two plays netted only 2 yards, and on third-and-8, Samuel Wyrick was intercepted by Red Raiders DB J.T. Starr.

“We just kind of got ourselves in a tough position with third-and-long,” Seth Wyrick said. “We’ve made it happen on third-and-long some this year, but you can’t do it every time.”

“We were two plays from winning against a great football team,” East Rowan’s first-year coach Kenneth McClamrock said. “I knew we’d struggle to stop them early, but I thought our defense settled in some and got the stops to give us a chance. South Point was in a game tonight, and they found out that East Rowan football is pretty good.”

South Point rushed for an astounding 544 yards and rolled to a 21-7 lead early.  But by halftime, Samuel Wyrick had thrown touchdown passes to Seth Wyrick and Simon Soles while Max Wall punched into the end zone twice on the ground. A blocked PAT on the Mustangs’ second TD hurt and had them chasing 2-point conversions that were unsuccessful, but they were down just 28-25 at halftime.

“They had the best passing game we’ve seen all season,” Lineberger said. “They’ve got a fine athlete at quarterback and his brother is a great target for him. We knew they could score. We told our guys coming in that they’d scored 50 at Freedom, so they had a great offense.We expected a shootout — and we got it.”

South Point (10-4) stiffened defensively in the second half, and East Rowan got only one score after the break. The Red Raiders got more pressure on Samuel Wyrick and tackled better on East Rowan’s hitches.

“They also took away our deep stuff by using two safeties a lot more,” Seth Wyrick said. “But it was a great game, and I was proud to be part of it. We had a run I’ll never forget.”

Safety Willie McCree had five tackles in the opening minutes and had double-digit tackles once again. Cody Hiatt blew up several South Point plays for no gain. Shiheem Saunders had a tackle for loss, but South Point just had too many big plays with Ryland Etherton, Jaquan Brooks, Tanner Muse and Jeffrey Pearsall all breaking loose.

It also hurt the Mustangs that defensive lineman Robert Barringer went down with an injury.

While Samuel Wyrick broke the Rowan County record for passing yards in a season that had been held for 20 years by North Rowan great Mitch Ellis, Seth Wyrick broke Johnny Yarbrough’s county record for receiving yards in a career that had stood since 1970. The Wyricks and their fellow seniors had a lot to be proud of after they wore the East Rowan colors for the last time.

“I couldn’t be prouder of my team and the way they fought tonight,” McClamrock said. “We had great senior leaders and the younger guys did a great job of responding to their leadership.This season and this playoff run was a tremendous way to start my head-coaching career. I think we showed people that East Rowan football is pretty good.”