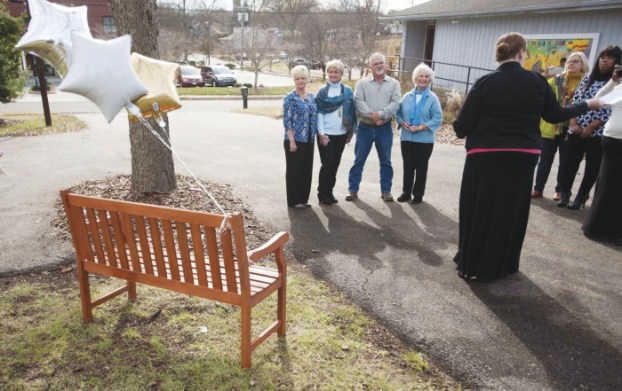 JON C. LAKEY / SALISBURY POST Prevent Child Abuse Rowan dedicated a bench this week in memory of Tomme Gamewell for his and his family's support of the nonprofit service.

When Tomme Gamewell’s family sat down to Thanksgiving dinner Thursday, they gave thanks for the man who was a husband, father and grandfather to them.

Chances are, the staff at Prevent Child Abuse Rowan was doing the same thing.

On Tuesday, members of the Gamewell family — Jane Gamewell and her children, Tomme Gamewell, Millie Harrison and Julie Proctor — gathered for a brief ceremony at the Terrie Hess House to unveil a bench given in Gamewell’s memory.

Gamewell died June 2, and his family requested that memorials be sent to Prevent Child Abuse Rowan.

Every time the Gamewells saw news reports of child abuse — which was often — it upset the couple, Jane Gamewell said. So they became supporters of the Terrie Hess House, where Prevent Child Abuse Rowan’s offices are located.

“He was a special kinda person and people cared deeply for him,” Jane Gamewell said Tuesday. “When we asked for memorials, people responded. It’s been wonderful.”

“My wife and I had donated before I knew this was a charity Mother and Dad held close,” Tomme Gamewell said. “Dad was a giving, caring type of guy.”

“He was so generous and gentle,” Harrison said. “His friends and family meant everything to him. To help a population with such a quiet voice and bring it to the forefront would make him so happy.”

“The outpouring of love is overwhelming and humbling to all of us,” Proctor said. “We’re excited about this wonderful project.”

This spring, the bench will be placed on an 8-foot by 8-foot brick pad, under a pecan tree which offers expansive shade all summer long. Taylor Clay donated the brick.

A plaque on the bench reads, “This seating area is dedicated to the memory of Mr. Tomme Gamewell on Nov. 25, 2014, by his loving family. We will always remember his goodness and love for us all.”

Jane Gamewell said she’s been impressed with the work of Prevent Child Abuse Rowan and Beth Moore, its executive director. “We’re hoping that because Beth wanted to do this memorial, more people will find out about it, and help.”

Over the years, the Gamewells and their children chose to make charitable contributions in honor of one another — with the exception of son Tomme’s “weird and funny gifts.”

“Can you tell we love each other?” Proctor said. “And we miss our father terribly.”

June 19 would’ve been the couple’s 55th wedding anniversary. They have six grandchildren and six great-grandchildren.

Years ago, Jane Gamewell started the tradition of asking each member of the family to name something for which they were grateful, before digging into the Thanksgiving meal.

No doubt Tuesday’s dedication was also a topic of discussion this Thanksgiving.

“We can’t think of a better way to celebrate our dad,” Harrison said. “We have so much to be thankful for.”