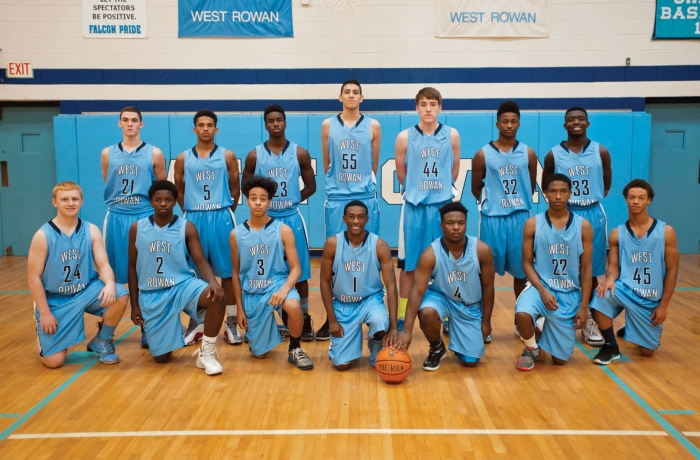 MOUNT ULLA — It’s a rare day when West Rowan opens the boys basketball season with more questions than answers. But that’s what 18th-year head coach Mike Gurley faces as the Falcons — minus four key contributors from a year ago — launch the new season.

“I’ll tell you what this team is,” Gurley said. “This team is brand new. You lose five seniors and you replace them with freshman and sophomores, it’s a brand new team. I can’t say if it’s better or worse than last year, it’s just different.”

Different might be better. Last season’s team dropped its final eight games, was hammered by Morganton Freedom in the first round of the 3A state playoffs and finished 11-15.

Still, Gurley is quick to shine a positive light on West’s season-ending slump.

“In six of those last eight, we had the lead in the fourth quarter,” he said. “But we didn’t get a win.”

A week before opening this season, Gurley couldn’t identify his projected starting lineup. The Falcons are raw and inexperienced, but return a marquee performer in senior Celexus Long, a well-decorated 5-foot-9 guard who averaged 11.9 points per game.

His 2013-14 season percolated without distinction until he poured in 26 points and then a career-best 30 in SPC games against Hickory Ridge.

“It’s time for him to do that consistently,” Gurley said. “He’s a senior. He’s quick. He’s a great 3-point shooter. And right now he’s our only proven scorer.”

The only other returnee with significant playing time on his resume is senior Greg Joseph, a 6-2 forward who outworks each of his teammates. He appeared in all 26 games and averaged 3.9 ppg.

“Greg started probably half the season last year,” Gurley said. “Without question, he’s the hardest worker we’ve got. Whenever we open a gym, Greg’s bringing it.”

The rest of  the team is a cast of maybes. Kortez Weeks is expected to come over from the football team and provide much-needed grit. Center Thomas Valle is a 6-foot-8 senior in need of seasoning.

“We’re not looking ahead,” Gurley said. “But honestly, this team’s a blank sheet to me right now. It’s going to be a developmental thing.”

A third-year starter, he was named all-county, all-conference and third-team all-region last winter. He’ll trigger an offense that won’t out-flash, out-razzle or out-dazzle anybody.

A part-time starter last year, he’ll be asked to contribute more offensively and do his best to be a lock-down defender.

A sure-handed wideout for West Rowan’s football team, his rugged quickness will more than compensate for his 5-foot-11 stature. Gurley likes this kid.

THE FALCONS AT A GLANCE