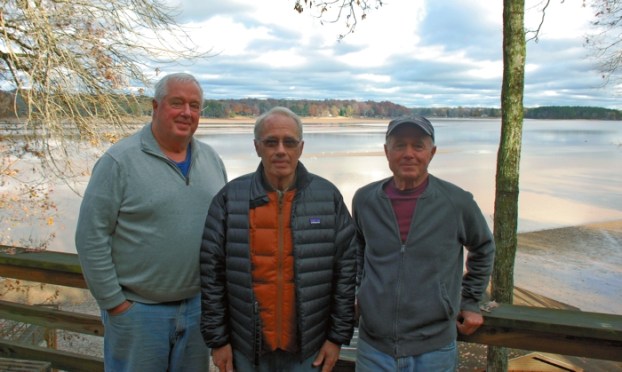 Mark Wineka/Salisbury Post From left, brothers Chris, Mike and Don Erb stand on the deck of their cabin, where upwards of 50 family members from across the country will gather today for a Thanksgiving tradition that's now 57 years old.

HIGH ROCK LAKE — Technically, the old cabin lies along the shores of High Rock Lake not far from the Shriners’ property. But old-timers still like to say this is the river, the main channel of the Yadkin River to be more exact.

Every Thanksgiving since 1957, the branches of the Erb/Frazier family have migrated like birds to this riverbank to celebrate the holiday in a weathered, but commodious cabin. Today is no different, as upwards of 50 relatives and friends will gather at noon for another Thanksgiving at the river.

Those attending will range in age from a month old to 90. They will be coming from near and far, with the “far” including places such as California, Oregon, Illinois, Georgia, Ohio and Pennsylvania. Some folks are in the midst of staying a week, while others will return home later in the afternoon or evening.

The brothers Erb — Don, Mike and Chris — and their wives, Debbie, Stacy and Jeanette, are hosts. and they actually form a tiny corporation which owns the family cabin.

Debbie Erb always cooks the Thanksgiving turkey — there’s a 24-pounder this year and at least one auxiliary bird from Bojangles.

Jennifer brings her famous peanut butter pie. Sue always impresses with her pecan pie and sweet potato casserole. With the turkey taken care of, everybody else knows to bring side dishes or things such as ice, plates and cups.

Leading up to Thanksgiving, Sarah Erb, who seems to have inherited her organizing skills from her late grandmother Nancy Erb, keeps track of exactly who is coming and what they’re bringing. In a way, the day is organized chaos, but everybody finds plenty to eat and talk about.

“We’ve never had a fight, have we?” asks Chris Erb, who has been to every Thanksgiving on the river. There were some words exchanged one year over dogs, the brothers decide, but that was about it.

Chris says politics usually finds its way into the yearly conversations, with a wide range of political philosophies being expressed. But everyone is civil.

“I think there’s a lot of history of the family that’s also passed back and forth,” says Chris, who lives in a Chicago suburb.

The boys’ parents, Dr. Norris and Nancy Erb, bought the original cabin and four acres in 1957 for only $6,000. It would become their getaway place from Salisbury, where Norris was a urologist. Especially in the summer, the boys became river rats – fishing, skiing, swimming and boating.

That first Thanksgiving at the cabin probably happened because two of Nancy Erb’s sisters, Bette and Dot, were widowed and needed someone to carve their turkeys. So the first Thanksgiving at the river included Norris and Nancy Erb; their three sons;  Norris’ parents, Helen and Kirby Erb of Badin; Bette and Dot; and Susan Miles, who was Bette’s daughter.

Miles also has been to every Thanksgiving at the river.

After the first one, the Thanksgiving gatherings at the cabin just grew, thanks in large part to Nancy’s enthusiasm for it and her big family. She was a Frazier and one of 13 siblings — 11 of whom survived into adulthood.

Nancy Erb’s obituary in 2011 described her as the unofficial matriarch of the whole clan.

“She kept us connected, together and in line,” Stacy Erb says appreciatively.

Retiring after about 20 years in California, Mike and Stacy Erb came back to his Rowan County roots in 2005 and built a beautiful lakeside home a stone’s throw away from the cabin. Their home becomes a second hotel over the holiday for some of the out-of-towners, who otherwise pile into the cabin.

The Erb/Frazier Thanksgiving is a lot like an annual reunion. Chris says 73 people came one year, and that was probably the highest attendance.

The original cabin gave way to a new cabin directly in front of it in 1973, and the only remnant of the first cabin is an outhouse. The “new” cabin is spacious when you include its three bedrooms, large kitchen, screened-in porch, upstairs loft and basement.

“It gets very close, if you can’t get people outside,” Mike says.

Long ago, the family decided to serve the Thanksgiving meal buffet-style. The turkey and all the side dishes are spread out on the kitchen counters. The desserts are placed on a desktop, and the drinks go on the screened-in porch. The dinner always starts about noon.

The middle deck has become a favorite spot for photographs with the river (lake) in the background.

It’s a well-known rule, enforced by Jeanette Erb, that the cabin’s television stays on the Macy’s Day Parade during the morning of food preparation.

The makeup of the people attending Thanksgiving on the river seems to change subtly every year. The family members who pass away seem to be replaced by newborns.

There often are boyfriends and girlfriends accompanying the younger adults. Neighbors usually drop by, and Stacy and Mike might invite friends who just aren’t going anywhere else for the holiday.

One year, one of the kids who was attending the School for the Arts in Winston-Salem invited nine classmates.

“Everybody just thought another branch of the family had come in,” says Don, who lives in the Washington, D.C., area.

Stacy Erb has a theory that her mother-in-law kept the Thanksgiving at the river tradition going because cooking was a way to keep her three sons close to her or get them to come back home.

Every time she opens the door to the cabin and hears the door squeak, Stacy Erb says it’s as though she’s opening a door to the past and the family members who aren’t here any longer.

Years ago, there were Thanksgivings at the cabin when Stacy and Mike could not attend. Stacy missed them terribly.

“It’s very uncomfortable when you’re away from it,” she says. “It just doesn’t feel right.”

Library brings work of famed naturalist Catesby back to life

SALISBURY — If you were to travel to the “Antiques Road Show” and plop down before the appraiser a bound, two-volume set of... read more