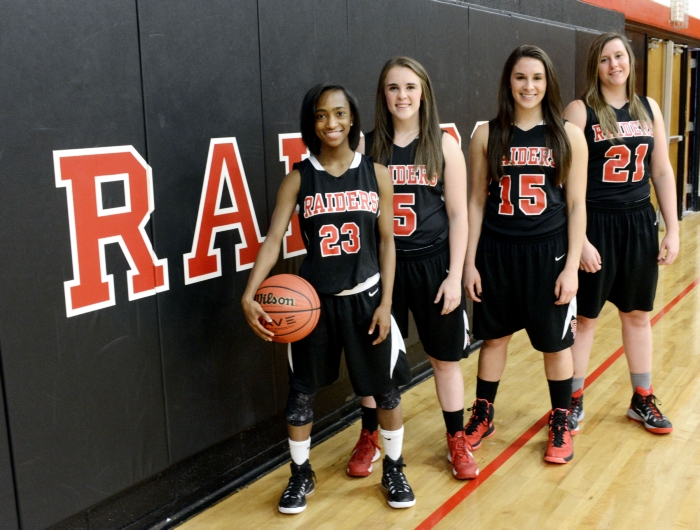 Ten of those seniors were in uniform last season. Six have started and two are all-district stars, so there’s a now-or-never feeling in the South Rowan gym. If this isn’t South Rowan’s year, the Raiders may never have a year.

“A lot of these girls have been together since seventh grade,” coach Jarrod Smith said. “That’s a long time. What that means is we aren’t having to teach our system.

“The girls know me and I know them, and they know what I’m going to say before I say it. Now we can work on fine tuning things.”

With Rowan County Player of the Year Avery Locklear still driving hard and all-county Cassidy Chipman still bombing 3-pointers, South Rowan is among the favorites to win the South Piedmont Conference, along with defending champion East Rowan. The last time South Rowan was the hunted instead of the hunters was the late 1990s when coach James Greene put together a fast-paced, intense juggernaut with four 1,000-point scorers.

South Rowan made a quantum leap forward from a struggling 6-18 in 2012-13 partly because inconsistent sophomores became more steady juniors, but also because Lynsey Corriher returned from an ACL injury. Corriher graduated, and the Raiders will miss her rebounding and interior defense even more than her 7.3 points per game. The hope is juniors Caitlin Chabala and Malaysia Williams can combine to do the things Corriher did.

Locklear (20.2 ppg) and Chipman (15.9 ppg) accounted for two-thirds of the Raiders’ scoring a year ago, so Smith expects to see opponents employ a triangle-and-two defense frequently.

“They’ve all improved their shots and their ability to score when the opportunities are there,” Smith said. “They know we’ve got to be ready every night.

“When you win 18 games and make the third round of the playoffs, there’s about 100 teams out there that are upset with you. We’ve got a big target on our backs, and we don’t want to go backwards.”

If she stays healthy (she missed seven games last season with a broken hand), the UNC Pembroke signee will shatter the school’s all-time scoring record of 1,529 points. She scored 20-plus points 14 times last season.

Chipman may be the toughest matchup in the SPC because she combines size and strength with a deadly outside shot. When South Rowan beat Southern Guilford  71-57 in the first round of the playoffs, she and Locklear combined for 55 points. Chipman scored 32 when the Raiders beat East Rowan without Locklear.

Bost’s exceptional quickness, combined with Locklear’s skill and decision making, make the Raiders a difficult team to press. Bost gets fouled a lot, and Smith expects her to knock down more free throws as a senior.

Hubbard missed most of last season with a broken collarbone,  but she was a factor down the stretch.

“People think of her as more of a volleyball player or softball player, but she’s not bad at this sport,” Smith said. “She’s an athlete and will surprise people.”